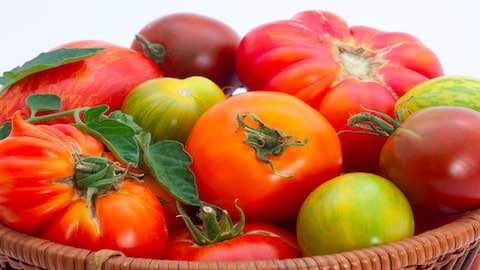 One of the things I enjoy most about my regular trips to farmers' markets right now is how colorful they are -- especially when I walk by stands filled with sun-ripened tomatoes. They are piled high with heirloom varieties, which can look like Mother Nature's kaleidoscope, with sizes ranging from tiny grape tomatoes to large beefsteaks almost as big as small winter squashes; shapes from perfect globes to teardrops, ridged discs to blobs resembling science experiments gone wrong; patterns including solids, stripes, and abstract blotches; and colors from ivory to pale gold, bright yellow to orange, lime green to deep emerald, and reds of all shades, including some so dark they're almost black.

These are definitely not the tomatoes most of us grew up with. But they are, very likely, the kinds our grandparents knew.

Before the rise of mass agribusiness in the second half of the 20th century, most produce came from small family-run farms. But the need for stability, uniformity, and long shelf life in produce that might be shipped hundreds or even thousands of miles led to the development of hardy varieties that could be relied upon and that offered consistency.

So-called "heirloom" produce helped mark the comeback of the fresh, seasonal, local movement. A term originally applied to certain bean varieties back in the 1940s, and first used for tomatoes in the early 1980s, heirloom refers to specific, anything-but-uniform varieties passed down from generation to generation. They may not look "normal" or survive long trips by truck, but they likely deliver not just wonderful colors, patterns and shapes but also amazing flavor.

I didn't even begin to touch on flavor when I mentioned the kaleidoscopic impact of heirloom tomatoes. But just imagine experiencing that same kind of variety when you open your mouth and take a bite. Some may be tart and tangy; others as sweet as a piece of fruit; still others full of the bold, true flavor of tomatoes you might dream of. That's why at this time of year, when we serve tomato dishes in my restaurants, we try to feature a wide variety of heirloom tomatoes as much as possible in a single dish: Not only do they look beautiful together, but each bite offers a different yet complementary flavor. Whenever possible when shopping for tomatoes, try to buy the organic varieties.

Try substituting heirloom tomatoes for the usual kind in all kinds of fresh tomato recipes right now, from salads like the classic combination of tomatoes, mozzarella, and fresh basil to even quickly cooked dishes like the pasta recipe I share here. (No point, however in using them for long-simmered sauces like the Tomato Base included in the recipe, since prolonged cooking will even out their flavors and mute the visual impact.)

Enjoy nature's kaleidoscope at your own table!

First, prepare the Tomato Base.

Bring a large saucepan of water to a boil and, near the stove, place a large mixing bowl filled with ice cubes and water. With a small, sharp knife, cut out the core of each tomato and score the bottom with an X. Carefully immerse the tomatoes in the boiling water. When their skins just begin to wrinkle, after about 10 to 30 seconds, remove the tomatoes with a slotted spoon and immediately put them in the ice water to cool. Drain. Peel the tomatoes, cut in half, and squeeze to remove the seeds. Coarsely chop.

In a 12-inch skillet over medium-high heat, heat the 2 tablespoons oil. Add the garlic and shallots and saute just until they start to color, about 30 seconds. Stir in the tomatoes, sugar or honey, and salt. Cook over medium heat, stirring occasionally, until reduced by half, about 20 minutes. Stir in the tomato paste and thyme. Set aside.

For the Heirloom Tomatoes and Pasta, bring a large stockpot of salted water to a boil. Meanwhile, peel, seed, and chop the heirloom tomatoes following the instructions above for those in the Tomato Base.

Heat the 1/4 cup oil in a clean 12-inch skillet over medium-high heat. Add the Double-Blanched Garlic and saute, stirring, until light golden, about 2 minutes. Remove from the heat and stir in the heirloom tomatoes, reserved Tomato Base, basil, and salt. Return to medium-high heat and simmer until some of the moisture from the fresh tomatoes evaporates, about 3 to 4 minutes.

Meanwhile, add the angel hair to the boiling water and cook until al dente, tender but still slightly chewy, following the manufacturer's suggested cooking time. Drain and, while still slightly dripping, add in the tomato sauce along with the parsley. Gently stir to coat.

With tongs or pasta servers, divide the pasta among individual shallow serving bowls, twirling it to form mounds. Garnish with basil sprigs and Parmesan.

How to make Double-Blanched Garlic

Bring a small saucepan of water to a boil. Near the stove, place a bowl filled with ice cubes and water. Meanwhile, with a small, sharp knife, carefully cut off the tips and root ends of however many garlic cloves you need.

Add a little salt to the water and carefully drop in the garlic cloves. Boil for 30 seconds.

Drain the garlic thoroughly and pat dry with paper towels. Remove the skins, which should slip off easily. Prepare as directed in the recipe.