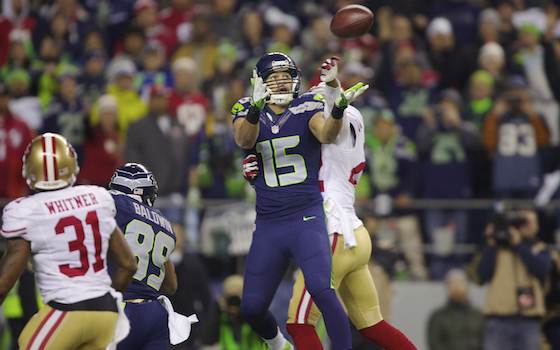 After a major blunder to start the NFC Championship game, Seahawks quarterback Russell Wilson remained undaunted, coming up with a 4th-and-7 TD pass that will live forever in Northwest sports history

Just after the nadir moment Sunday in the NFC Championship, when Russell Wilson fumbled away the ball on the game's first scrimmage play, FB Michael Robinson looked over at the Seahawks quarterback on the sidelines.

Yes. Yes, he was. He was wrapped in the serenity he generates when everyone else is going street-rat crazy.

Three hours later, craziness was still pulsing at the Clink, but it was from euphoria, not despair, over a sprawling clash between splendid teams. In a game seemingly lost, then won, put in nearly unbearable jeopardy, then saved a final time, Wilson, a man apparently made of pure resilience, took the final snap in the 23-17 triumph over the formidable 49ers.

"To be honest, at the at last snap," he said, smiling, "I was thinking I could have been playing baseball right now."

When the world zigs, he zags.

For that remarkable virtue, the Seahawks are in the Super Bowl for the second time in franchise history. That resilience will be the theme, should he outplay the great Peyton Manning and the Denver Broncos in the biggest show in sports.

After that strip-sack fumble generated by San Francisco's ferocious linebacker, Aldon Smith, which produced not only a field goal but a region-wide groan that may have been seismic, Wilson slowly pulled it back together over the next three periods. Despite a beating from the Niners' pass rush, Wilson avoided further mistakes and kept the game within reach.

Then he paid back Smith. Not with his legs, or his arm, but his voice.

Trailing 17-14 early in the fourth quarter, and facing a fourth-and-seven at the San Francisco 35-yard line, the Seahawks were looking at three choices: A punt, a 53-yard field goal, or going for it against a defense that had bludgeoned them.

"We were trying to figure out what to do," Wilson said. "I was kind of begging (coach Pete Carroll) on the sidelines, hey, let's go for it. And he decided we were going for it."

Armed with the breathtaking decision, Wilson went to the huddle and called the pass. Then he issued an alert.

"Hey, listen, we're going to go double-count right here," he said, referring to a change in cadence of the snap count. "Hopefully, they go off-sides. If they do, we take a shot down the field because it's a free play. Sure enough, they did.

"We practice this stuff all the time."

Smith jumped from his left end just enough that he was caught across the line when the ball was snapped. Flags went up, but the play was allowed to go on, just as Wilson hoped. Dropping back under pressure, he sent a laser straight down the middle to WR Jermaine Kearse in the end zone.

The kid they call Chop Chop, from Tacoma's Lakes High and the University of Washington, became a featured part of Northwest sports history when he leaped up against tight defense for the catch that put Seattle ahead, 20-17, for the first time in the game.

Perfect execution. And the start of the collapse of the 49ers, in their third consecutive NFC Championship.

"We had a great call and an incredible play by Russell and the protection," Carroll said. "And Kearse comes through with an heroic touchdown."

The game was not over, not by a long way. The lump stayed in the civic throat until the last last minute. But with a lead, the game was now in the hands of the defense -- precisely Carroll's plan.

"It was," he said, "exactly the way we'd like to see it -- close out with big momentum and the turnovers at the end of the game."

He was strip-sacked by DE Cliff Avril and DT Michael Bennett recovered. He threw a terrible ball that was easily intercepted by SS Kam Chancellor. And inside the final minute, from a first-and-10 at the Seattle 18, he lobbed a fade route to Michael Crabtree that the relentless Richard Sherman tipped to LB Malcolm Smith for the last of the Niners' failures.

Then came the whoosh of relief, followed by jubilation. The award podium was assembled at midfield, former owner John Nordstrom presented the Halas Trophy to current owner Paul Allen.

The most strenuous of sporting deeds had been done -- the Seahawks met their own expectations, and that of the football world.

"All I can tell you is it's quite a magical moment," said Carroll, winner of national college championship at USC with the chance to be one of three coaches (Barry Switzer and Jimmy Johnson) to add a Lombardi Trophy. "You can't quite grasp the reality of it -- is this really happening? Did we really do this?"

The same delighted bewilderment sloshed around Puget Sound after a week of high anxiety among fans unused to the expectation of success for a Seattle sports team. Many were the contributors, but none more astonishing than Wilson.

He flashed the thought about his since-abandoned career as a pro baseball player. But he also had another reflection in as the final seconds led to euphoria.