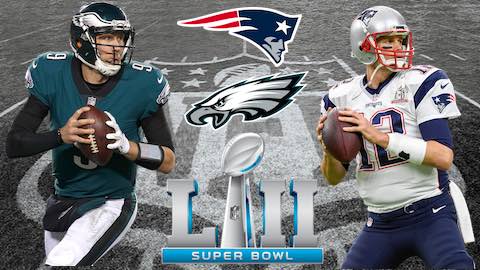 The Patriots are back. Again. They face in the Super Bowl the Eagles, a nice little team but one that couldn't beat the fading Seahawks in December. Ho. Hum.

In the first Seahawks-free NFL post-season in six years, Seattle fans may have a hard time feigning a rooting interest in the Super Bowl LII in Minneapolis, other than the universal appeal of rich people taking icy falls upon their wallets and purses.

Of course, it is imperative that the New England Patriots are rooted against, simply because they are the Borg, and the rest of humanity fears being assimilated by the remorseless Kraft-Belichick-Brady alien race.

But the prospect of cheering for the other side, the NFC champion Philadelphia Eagles, leaves something to be desired. Yes, nice 14-3 season. Yes, coach Doug Pederson was born in Bellingham and graduated from Ferndale High School, where he was all-state in football, basketball and baseball.

But the Eagles laid a dinosaur egg at the Clink Dec. 3, losing 24-10 to the Seahawks despite the presence of the precocious QB Carson Wentz, who later injured a knee and missed the 38-7 rout Sunday of the Minnesota Vikings in the NFC Championship.

Should the Eagles, a seven-point underdog Feb. 4, upset the Dastardlies, another layer of bitterness can be added to the Seahawks' seasonal outcome, this one of missed opportunity, because the Eagles aren't that good, and the Seahawks were more than their match, never mind the odious, 2-3 December finish for Seattle.

Part of the irony here is that over the past three seasons, the Seahawks are a combined 5-1 against this year's final four. The Seahawks in 2015 beat the Vikings twice, 38-7 in the regular season and 10-9 in the playoffs. In 2016, they beat the Pats in Foxborough 31-24, the same year they beat the Eagles 26-15, whom they thumped again last month, sending a ripple of surprise through the NFL.

The lone loss was to the Jaguars, 30-24, Dec. 10 in Jacksonville, where the Seahawks had the ball in Jags territory in the final two minutes with a shot to win the game.

What matters, of course, is the here and now, not history. Which is why Seahawks coach Pete Carroll is purging his coaching staff. For a variety of reasons, mainly injuries, the Seahawks became worse at the crucial time when the final four NFL teams continued to get better, and somebody has to pay for that. Margins in the NFL are wafer-thin.

But the Seahawks injuries were no more plentiful than what each final four team dealt with, perhaps with the exception of Jacksonville (Motto: "We're Florida's uncool city!").

When the Eagles lost Wentz for the season, vultures quickly circled the carcass. The backup was the singularly unimpressive Nick Foles. Following a modest career at the University of Arizona, Foles was taken 14 picks behind Russell Wilson in the 2012 draft and now is the most unlikely Super Bowl starting quarterback since Trent Dilfer of the 2000 Ravens.

Yet Foles threw for 352 yards Sunday against the NFL's stingiest defense, knocking the Vikings from their hometown Super Bowl, which preserves the NFL's remarkable clean sheet of never having a host city with its own team. Instead, Lake Wobegon will get for its party matchup Danny DeVito vs. George Clooney.

Brady enhanced his aura Sunday with an even more corny set-up: He was said to have cut his throwing hand in a practice collision with a teammate that required 10 stitches.

Gutty Tom threw 38 times, completing 26 for 290 yards and two fourth-quarter touchdowns with no turnovers. After Spygate, Deflategate and Murdergate, we must now add Stitchgate to the list of unresolved mysteries around America's most insufferable team.

The Pats' third Super Bowl appearance in four years evolved creepily like the one in Phoenix, which you may recall.

The Jags had a 20-10 lead early in the fourth quarter, just as the Seahawks led 24-14 with eight minutes to go in SB XLIX. Now, as then, Brady threw two TD passes, while defenders Myles Jack and Marcell Dareus came out of the game injured on consecutive plays, much as key Seahawks defenders were wounded three years ago. And the Jags had a late chance to rally for the win, but didn't.

Nor would it be a Pats game without some officiating shenanigans. Besides the 6-1 disparity in penalties, referees whiffed on a pivotal call at the end of a brilliant play by Jack, the Bellevue High School (and Academic Institute) grad.

Ahead 20-10 early in the fourth quarter but trailing receiver Dion Lewis after a long catch-and-run, Jack ripped the ball free from behind, recovered, leaped to his feet at the Jacksonville 33 and took off unimpeded. But the the play erroneously was whistled dead at the spot of the recovery.

Replays clearly showed he wasn't touched after he gained possession. The play was so improbable that officials didn't grasp it in real time or with replay. There's no guarantee Jack would have scored on the return, but they would have started possession well down the field.

The play could have been a game-changer, but the Jags still would have had to rely late on Blake Bortles. The much-abused QB exceeded everyone's expectations for him throughout the season. But the season had one quarter left, and Brady was smack-dab in the middle of it.

Buster Douglas, Bortles was not.

A shame. The Jags, 3-13 a year ago, would have made for a fun week in Minneapolis. Instead, we get the low growl of Belichick and ageless-wonder stories about Brady.

So, repeat after me: Go, Ferndale.