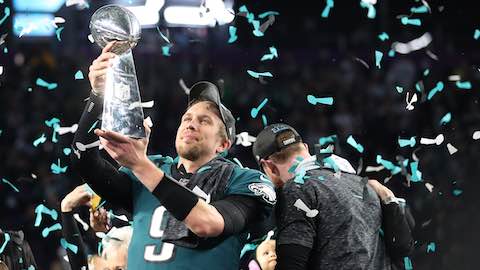 Philadelphia Eagles quarterback Nick Foles was voted the winner of the Pete Rozelle Trophy, awarded to the Super Bowl LII Most Valuable Player as the Eagles defeated the Patriots 41-33.

Foles completed 28 of 43 pass attempts for 373 yards with three touchdowns and one interception for a 106.1 passer rating. He is the third quarterback to start and win the Super Bowl after starting three or fewer games in the regular season, joining Doug Williams (Washington, Super Bowl XXII) and Jeff Hostetler (New York Giants, Super Bowl XXV).

Foles, who also had a one-yard touchdown reception from tight end Trey Burton, is the first player in NFL history with a touchdown pass and a touchdown catch in a Super Bowl. He is the only quarterback in NFL history to have a 100+ passer rating in each of his first four career postseason starts (minimum 20 attempts per game).

The MVP award is chosen by a panel of 16 comprised of members of the Pro Football Writers Association of America, selected members of the electronic broadcast media and by fans interactively through the National Football League's official website, NFL.com.

"I am speechless. All glory to God first and foremost. I wouldn't be here without Him. To be a part of this organization, to be in this moment is something you dream about as a kid. To be right here with the confetti flying with the greatest group of men, I am about to be with my family at some point."

Nick Foles on his teammates who showed up during the Super Bowl:

"Yeah, that was a hard-fought game. New England is a tremendous team, one of the greatest quarterbacks (Tom Brady) and coaches (Bill Belichick) of all time, and just for us, the team all year just fought till the end, just kept leaning on each other. And that's just what this season has been about. That locker room is a special locker room, and you can see it throughout the course of this game. No matter what happened, we just kept sticking together, kept leaning on each other. We have an amazing coaching staff, and amazing personnel staff. Just to be in this moment, unbelievable."

Nick Foles on his touchdown catch:

"That's something we've been working on, and Doug (Pederson) and I were talking. I was like, ‘Let's just run it.' It was a good time, and the end was a little wider than I thought, so I was like, ‘I really need to sell like I'm not doing anything.' And it worked. Trey (Burton) made an amazing throw, right on the money. I just looked it in, and yeah, we've repped it for a while, so I was excited to get it run in the Super Bowl."

Nick Foles on recently considering retirement to winning the Super Bowl and what changed in his life along the way:

"We talked a lot this last week about a couple years ago, there was a time where I was thinking about hanging up the cleats, and I think as people, we deal with struggles. And that was a moment in my life where I thought about it, and I prayed about it. I'm grateful that I made the decision to come back and play. I wouldn't be out here without God, without Jesus in my life. I can tell you that first and foremost. I don't have the strength to come out here and play this game like that. That's an everyday walk. We have struggles as people, and that's just been my rock and my family."

Nick Foles on if he saw Patriots QB Tom Brady postgame and if they spoke:

"I didn't get to see Tom (Brady). I was looking for Tom. It got pretty crazy really fast. He's one of the greatest of all time. Guy does it right. He has been unbelievable. He was unbelievable tonight. I can't say enough about him."

Nick Foles on playing relaxed throughout the game:

"I felt good. You never really know what it's going to be like when you're going into a Super Bowl. I've never been here before, so there are normal nerves. You've got butterflies. It's a big game. It doesn't get any bigger than this, but I felt good. I felt calm. I think the big thing that helped me was knowing that I didn't have to be Superman. I have amazing teammates, amazing coaches around me, and all I have to do is go play as hard as I could and play for one another, play for those guys and not look at the scoreboard, not look at the time. Just go out there and play. Don't worry about it, and came away with a victory."

Nick Foles on his mindset and playing aggressively:

"I didn't switch my mindset. I wasn't worrying about the scoreboard. I wasn't worried about the time. I was just playing ball. I think sometimes you start worrying about that so much, and it starts creeping into your brain. I was just playing. Whatever play Doug called, I was just going to go out there and rip it, and that was sort of our mindset going into this. We had to play a strong 60 minutes, and it took 60 minutes to win this game."

Nick Foles on if he was excited or nervous for the chance to catch a pass:

"No, I'm excited. A quarterback going out on a route? I was pumped to go over there and talk to Doug [Pederson], and we agreed on it. Like I said, we worked on it for a long time, and we executed it perfectly. That's probably the best it has looked. So, we hit it at the right time."

Nick Foles on how long they have worked on the trick play:

"We've probably been working on it for a month."

Nick Foles on standing on the Super Bowl podium with his family:

Nick Foles on what it means to be part of the Philadelphia Eagles first championship and what he would say to the fans:

Nick Foles on when he began to believe that this outcome was a possibility:

"I was really staying in the moment. This is always the outcome, the goal, but I feel like if you put it on a pedestal, you start forgetting to do the little things -- the preparation, the practice. You start forcing balls because you're trying to play at a level that … so, when this became reality was when we won the NFC championship game because (we were) staying in the moment, and I wanted worried about the next day. I was worrying about that moment, and that's what I did today, we did today, just staying in this moment, doing everything you can in the moment to be successful, and the outcome was we were world champs."