Holiday Foods That are Good for You 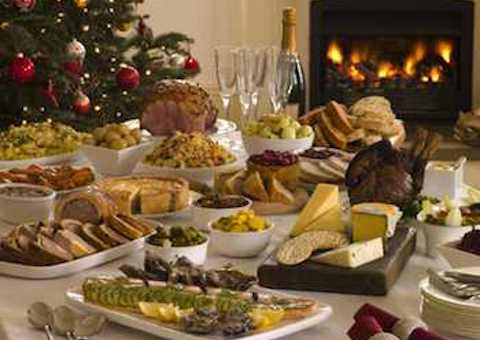 Holiday Foods That are Good for You

To save on calories, sprinkle nuts or seeds atop vegetables and fruits rather than serving them alone or in desserts

It's hard to avoid indulging during the holidays. But do you have to? Actually, holiday foods aren't all bad. Excluding, say, eggnog, fried latkes, and other calorie-laden treats, some things that could land on your plate this season are in fact healthy.

Oysters -- which supposedly taste best in the winter months -- are an example. Traditionally served in stew on Christmas Eve, the mollusks contain more zinc than any other food. Zinc is a mineral that helps fight off infections and heal wounds, making oysters good for the immune system. They also contain vitamin B12 and iron, required to make red blood cells, and omega-3 fatty acids, which are good for heart health.

Maybe you have a favorite holiday dish: green bean or sweet potato casserole -- or, perhaps, oyster stew. Recipes for these and many other festive dishes usually call for whole milk or cream and butter. But with that slice of pecan pie, made with sugar and eggs, a single celebratory feast could easily max out your daily allowance of calories.

Still, you can make lighter, healthier versions with a few improvements. Top green bean casserole with sliced almonds instead of fried onions, and use fat-free cream of mushroom soup instead of the regular kind, suggests Bethany Thayer, a registered dietitian and spokesperson for the American Dietetic Association. In her dishes, Thayer uses skim milk and egg whites in lieu of whole milk and whole eggs.

Enjoy foods that make the holidays for you, she says, but minimize your fat intake by abstaining from sides and desserts, or by tweaking their recipes. And once you've committed to cutting back, maximize your meal's healthfulness by adding these ingredients:

Walnuts, peanuts, pistachios and a variety of other nuts and seeds contain fiber and plant sterols, which may help lower cholesterol. A host of studies have shown that nuts favorably affect the risk of heart disease, says Penny Kris-Etherton, a nutrition professor at Penn State University.

One strike against nuts is their calorie content, so snacking on more than a handful or so is a mistake if you're planning to have other fattening treats with your meal. A better way to eat them? Sprinkle nuts or seeds atop vegetables and fruits rather than using them in desserts, suggests Kris-Etherton. The American Heart Association recommends people eat at least 4 servings per week to improve cardiovascular health.

Pumpkins, squash, and sweet potatoes are orange because they contain the plant pigment beta-carotene, an antioxidant that scientists believe protects against heart disease, cancer, and other age-related diseases. Beta-carotene is also a precursor to vitamin A, which is necessary for good eyesight. So go on, have that slice of sweet potato pie -- minus the crust and whipped cream.

Anthocyanins in cranberries give them their red color, and like beta-carotene, these chemicals have antioxidant properties. In addition to preventing cellular damage in the body, anthocyanins appear to have an anti-inflammatory effect, important since "inflammation can certainly contribute to cardiovascular disease, as well as certain cancers," says Diane McKay, an antioxidant researcher at Tufts University, Boston, Mass.

Resist the urge to camouflage their bitter taste with loads of sugar. Instead, says Thayer, prepare cranberries with sweeter fruits such as chopped apples or pineapple to avoid adding extra calories.

Antioxidants in cocoa are believed to improve the flexibility of blood vessels and lower blood pressure. Dark chocolate has a higher concentration of cocoa than does milk chocolate, and thus, contains more of the helpful compounds. It might also help relieve stress. Nearly an ounce and a half a day for two weeks lowered levels of stress hormones in stressed-out volunteers, a 2009 study found. Chocolate is not without calories, though, so eat in moderation.

Ginger, cinnamon, cloves, and other oft-used holiday flavorings are beneficial, too. Research has found that ginger helps relieve nausea, for example, and ginger tea is a home remedy for colds and certain viral infections. Some research suggests cinnamon may help diabetics better manage their blood sugar levels, but that doesn't mean binging on maple-cinnamon pumpkin pie is healthy.

"(Cinnamon) does not antidote carbs," says Adriane Fugh-Berman, a specialist in herbal medicine and dietary supplements at Georgetown University, CITY. Clove oil has historically been used to dull toothaches, while oil from peppermint -- another seasonal favorite -- is a centuries-old aid for digestion. In the heartburn-prone, however, peppermint may cause more pain than pleasure, says Fugh-Berman.

One big bonus of using herbs and spices: They may reduce the need for salt or sugar, Thayer notes.

"Holiday Foods That are Good for You"