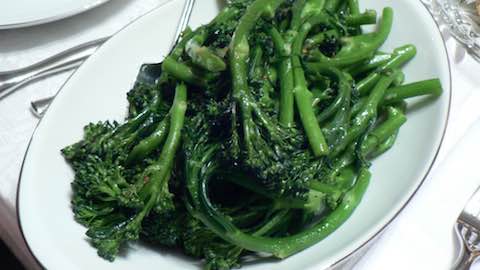 A centuries-old staple in Italian and Chinese cuisine, broccoli rabe (pronounced "rob") is gaining popularity on the American plate. Despite its name, this dark leafy green is actually a closer relative of the turnip family than broccoli. While it was originally cultivated in the Mediterranean and China, it is well known around the world by many names, such as rapini, Italian or Chinese broccoli, and turnip broccoli.

Because both are members of the Brassica genus, the resemblance between broccoli and broccoli rabe (Brassica rapa) is unmistakable. Yet broccoli rabe's ruffled leaves and tiny florets have a softer look that's countered by a bitter flavor more reminiscent of mustard greens or kale than broccoli. Its bite is as bold as its nutritional contribution: A one-cup serving provides more than 100 percent of the daily value ( percent DV, based on 2,000 calories per day) of vitamin K (shown to help build bone density in women) and the powerful antioxidant vitamins A (21 percent DV) and C (13 percent DV.) In addition, broccoli rabe contains folate, iron and calcium.

Broccoli rabe, like all Brassicas, has cancer-preventing potential due to substances called glucosinolates that serve as a natural defense system to protect the tender buds from pests. Glucosinolates are converted in the body into bioactive compounds called sulforaphanes. Studies suggest that they may protect against cancers of the stomach, lung, esophagus, colon and breast. Broccoli rabe also contains lutein and zeaxanthin, phytonutrients that protect the retina of the eye from oxidative damage and may slow the onset of age-related macular degeneration. Studies show that those who get the most lutein have a 20 percent to 50 percent reduced risk of cataracts when compared to those who eat the least.

Its slightly bitter edge is the ideal counterpoint to the sweet and spicy flavors of China and the starchy dishes of Italy. Yet it's prepared as simply as any American green. Every part of broccoli rabe is edible, though the tough stem bottoms are usually removed before cooking. Blanching them briefly in lightly salted water will reduce bitterness. Broccoli rabe is available year round, but peak season is late fall to early spring when cool weather softens its flavor. Choose young rabe with crisp, vibrant-colored leaves for milder flavor. Wrap loosely in plastic and refrigerate up to three to four days. Enjoy broccoli rabe steamed, stir-fried, sauteed, or braised, just as with any greens. It combines well with pasta and rice, especially in Asian and Italian dishes.

In a large pot, bring lightly salted water to a boil. Trim bottom 1-2 inches from rabe stems. When water is boiling, add broccoli rabe for 1 minute, drain, and set aside.

Heat olive oil in a saute pan over medium heat. Add garlic and red pepper flakes, and saute until golden. Add broccoli rabe and sundried tomatoes to pan and toss to coat, about 2-3 minutes.

Season lightly with salt and pepper as desired and top with toasted pine nuts.