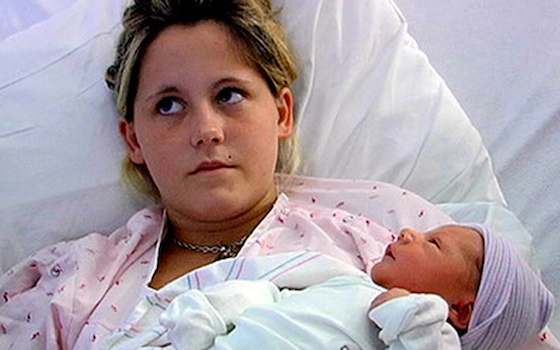 Do MTV's teen mom shows really lead to lower teen birth rates, or not? Where you stand depends on whose scientific study you believe.

A new university study made headlines with a sunny observation about MTV's controversial "reality shows" about the struggles of teenage moms, "16 and Pregnant" and its "Teen Mom" spinoffs: Since their 2009 debut, they may have led to lower teen birth rates.

If so, that would tend to confirm a theory of mine: Nothing could frighten teens away from the notion of getting pregnant like watching other teens grow up real fast under the endless 24/7 chores, worries and obligations of childrearing.

But as news of that study broke, another story from the caught my attention: A study of the shows by two communications researchers concluded that heavy viewers of such programs had dangerously unrealistic views about how glamorous the life of pregnant teens could be, especially if you get to star in a TV show.

Both studies sound about right, but they're looking at different things.

The optimistic study comes from economist and his co-author, economist of . Their findings, published by the on Monday, compared viewer ratings with what was trending on Twitter, Google Trends and Topsy among teenagers.

As the overall birth rate for teens between the ages of 15 and 19 declined between 2009 and 2012, the researchers attributed 5.7 percent of the decrease to watching and talking about the shows in the 18 months following the shows' premier.

"You can look at the tweets," Levine told The . "People are saying, '16 and Pregnant' is the best form of birth control.' "

But two assistant communications professors dispute that conclusion in a new study accepted by the journal .

at and at the compare the views of the shows' most frequent viewers with other, less devoted fans and concluded, "Heavy viewing of teen mom reality programming positively predicted unrealistic perceptions of what it is like to be a teen mother."

Compared to casual viewers or nonviewers, Martins and Jensen wrote, heavy viewers of teen mom reality programs were more likely to believe that teen mothers have a high income, involved fathers, easy-to-find child care and a lot of time to themselves to finish high school and other cool stuff.

"The fact that teens in the study seemed to think that being a teen parent was easy might increase the likelihood that they'll engage in unsafe sexual practices," Martins said, "because that's not a real consequence to them."

The original show, "16 and Pregnant" debuted in by following different girls on each show dealing with the hardships of their pregnancies.

It led to several "Teen Mom" spin-offs that, in the fashion of more conventional reality shows, followed the same four girls throughout the season.

This has led, also in typical reality-show fashion, to national stardom for the young women, including cover stories on celebrity magazines that unsurprisingly feed the impression that, hey, maybe getting pregnant in high school can be pretty cool.

It's not cool. As politicians and public policy specialists in this season observe the 50th anniversary of declaration of a War on Poverty, the strong links between out-of-wedlock births and poverty, including crime and poor performance in schools, are more painfully obvious than ever.

The context and content of TV shows matters. To keep audiences coming back, commercial TV shows have to be, more than anything, entertaining. The ravages of real poverty are not very entertaining. That's why you're more likely to see the worst consequences of teen parenting on than .