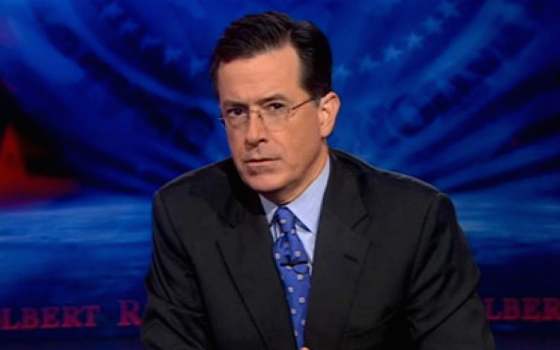 One of the unwritten but widely respected rules of satire is that somehow, somewhere, someone simply isn't going to get the joke.

And if they don't get the joke, you get taken seriously about something you don't really believe.

That makes , who has turned a satirical version of himself into a superstar of fake news, one of the bravest people on television.

It is therefore appropriate that he has found himself caught up in a real-time example of a new hazard of the digital age: Satire and Twitter go together like drunks and driving.

"Who would have thought," he lamented on Monday night, "that a means of communication limited to 140 characters would ever create misunderstandings?"

No kidding. Or maybe he was. It's sometimes hard to tell when the real Colbert dives deeply into his self-described role as "," the "willfully ignorant" right-wing pundit.

He was responding in this instance to last week's angry Twitter eruptions over a segment in which he satirized owner new nonprofit. Aimed at helping Native Americans, it is called, yes, .

Colbert heard irony in Snyder's use of a racial slur to name a foundation that was created to perfume the slur that many, including me, hear in the pro football team's name. So fake-conservative "Stephen Colbert" responded by announcing his own group: the " to Orientals or Whatever."

Edgy? Uncomfortable? Yes. But satire is supposed to make you at least a little uncomfortable. In his show's context, the joke worked. The audience laughed with Colbert and groaned at Snyder's tone-deaf -- or tone-indifferent -- cluelessness.

Trouble came later, Colbert explained this week, when "a web editor I've never met" tweeted his Ching-Chong punch line without its set-up or even posting a link to any mention of Snyder's foundation.

Among those who were outraged by that naked tweet was , a 23-year-old writer and hashtag activist. To the uninitiated, that means she raises issues by attaching a hashtag (#) to them in the hope that they will get virally retweeted on Twitter.

Park rocketed to Twitter stardom in December with #NotYourAsianSidekick, a provocative invitation to a much-needed debate about Asian-American stereotypes that trended for several days. She since has been named one of The Guardian's "top 30 young people in digital media," an international fame that would make smile.

Her new cause, #CancelColbert, outdid her previous campaigns, triggering frontlash and backlash in every direction. Critics blasted Colbert and were blasted back by Colbert fans, political-correctness opponents and a broad zoo of general-purpose haters.

Genuine right-wingers in some cases used #CancelColbert as a golden opportunity to vent their long-held outrage at Colbert's fake conservatism. Snyder's R-word controversy was lost in the Twitter storm.

To his credit, fake "Colbert" asked people to stop attacking Park. "She's just speaking her mind," he said. "That's what Twitter is for, as well as ruining the ending of every show I haven't seen yet."

Quite right. For that, I give what the fake "Colbert" would call a "tip of the hat" to the real Colbert and a "wag of the finger" to the haters. We can disagree without being disagreeable, as President Obama likes to say, although you wouldn't know it from some of his critics either.

Satire is not dead, as some grumps have tweeted in response to this dust-up. But Colbert demonstrates that good satire does require a tad more than a birdbath's depth of thinking to create or appreciate.

It requires context to be provided by the satirist and understood by the audience. Context, more often than not, exceeds the capacity of a Twitter tweet, unless it includes a link to something longer than 140 characters.

Park has said in interviews that she usually likes Colbert's show, but hates the ways in which Asian Americans too often become a go-to group for comedians to ridicule. As an American, not just an African-American, I sympathize. When your only way to talk back is offered by social networks, every problem becomes a potential tweet.

Just keep it short, please. And if you're joking, let us know it.