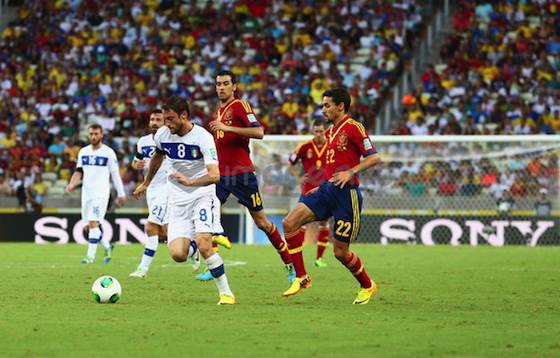 Claudio Marchisio of Italy in action during the FIFA Confederations Cup Brazil 2013 Semi Final match between Spain and Italy. (Photo by Getty Images/Getty Images for Sony)

World and European champions Spain overcame Italy 7-6 in a penalty shootout after surviving an energy-draining Confederations Cup semi-final that ended goalless after two hours in sapping heat and humidity.

Substitute Jesus Navas converted the game-winning penalty-kick past Italian Goalie Gianluigi Buffon to lift Spain to a 7-6 shootout win over Italy to book a spot in the final of the 2013 Confederations Cup at Castelao.

Spain, winner of the 2010 World Cup and the 2008 and 2012 European Championships, will play Brazil at Rio de Janeiro's Maracana stadium for the title in the World Cup preparation tournament.

Nobody missed in the shootout until Italy defender Leonardo Bonucci skied from 12 yards with the score tied at 6-6, giving Navas the chance to send Spain into the final.

Navas, who recently signed with Manchester City, did not disappoint as he calmly beat Gianluigi Buffon for the game-winning tally.

Italy manager Cesare Prandelli's decision to switch to a three-man defense paid dividends early as the Azzurri kept the Spaniards' attack at bay.

The Italians also looked superb on the counterattack with Christian Maggio leading the way. However, Maggio's header from Andrea Pirlo's pass was deflected by Iker Casillas in the 17th minute while Daniele De Rossi's glancing header missed the target 60 seconds later.

Spain also had several chances, with the last coming from Fernando Torres but his shot was way off target.

With La Roja failing to show an increased threat, Vicente Del Bosque introduced Jesus Navas in the 50th minute. Navas immediately felt his presence felt when he drove a shot from 20 yards but Buffon was there to deflect it.