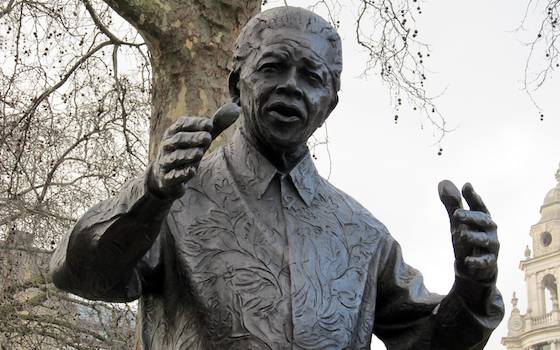 When of The and I were granted an interview with inside Pollsmoor Prison near Capetown, South Africa, in August 1985, it was a rare occurrence, personally approved by then-South African President over the objections of his foreign minister.

Mandela gave us a tour of the prison. The guards, apparently, allowed him to roam almost at will. He showed us a small garden he tended of which he seemed proud.

The first thing we noticed about him was his gentle spirit. Whether this was the result of more than two decades in prison that had robbed him of the fire that raged in his revolutionary belly as a younger man, I could not say. When we sat down in a sparse room to interview him, guards would not allow any recording, only handwritten notes.

The Mandela celebrated by world leaders following his death was not the Mandela we interviewed. He received a life sentence in 1964 for attempting to sabotage the apartheid government, but had been offered his freedom several times. He only had to promise not to engage in any more violence. Mandela told us, however, that if he were released from prison he would be back "in a day," because he saw "no alternative" to violent revolution to end apartheid. There's no room for "peaceful struggle," said the man who would upon his release engage in peaceful struggle that would result in his becoming the first black South African president.

Strangely, he asked if I knew Sen. . I said I did. Perhaps he assumed that made me a political ally.

Mandela denied he was a communist. in London, however, reported in 2012 that Professor , a British historian, found "new evidence" proving that during Mandela's early activist years he held a "senior rank in the , or SACP. ... to enlist the help of the communist superpowers for the ANC's campaign of armed resistance to white rule."

Mandela told us communism is "better" than apartheid because communism has no color bar and gives "equal opportunity to everybody." Under communism, he said, "everybody would be living better." Not exactly.

In an address just days before our visit, President Botha told an audience in Durban, South Africa, about a court document in Mandela's handwriting which read, " members are the most advanced revolutionaries in modern history ... the enemy must be completely crushed and wiped out from the face of the earth before a communist world can be realized."

When asked about this, Mandela admitted writing those words, but claimed they had been taken "out of context." He denied in court that he was a communist.

Since the end of apartheid in 1994, some violent crimes, such as murder and armed robbery, have declined, but according to Young People in International Affairs, an organization that helps African youth interested in international affairs, South Africa, dubbed in various media reports as "the rape capital of the world," estimates that 360 women are raped every day. Unemployment is high (25.2 percent in the fourth quarter of 2012), according to Civitas: , and economic growth has been sluggish. The post-apartheid record in South Africa is mixed.

Many violent revolutionaries became peacemakers once their oppressors were removed from power. Whether Mandela experienced a "conversion" after we met him, or simply adapted a more pragmatic path to his goals, I cannot say.

Let us charitably assume the best about a man revered by many who ended an evil and gave his country an opportunity to build something better.

In this quest, Mandela worked with Botha's successor, President , who reciprocated the graciousness Mandela had extended to him. In a statement following Mandela's death, de Klerk said South Africa had lost one of its founding fathers and "greatest sons."

No person could ask for higher praise or a better epitaph.