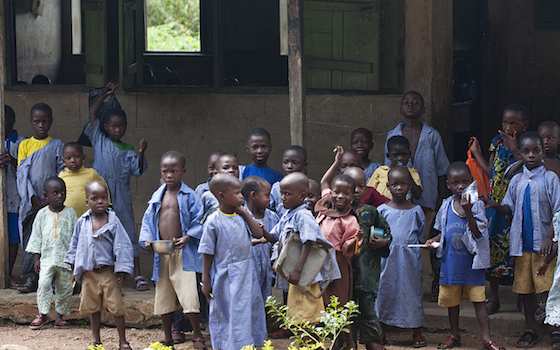 There was a method to this madness.

Meaning that night more than three weeks ago when a caravan of trucks and buses descended on a boarding school in rural Nigeria and more than 200 schoolgirls were abducted from their beds. As is often the case with acts of terror, this mass kidnapping was accomplished with a theatricality and audacity designed to inspire awe.

But the act of terror was also an act of fear. What the 2012 shooting of in Pakistan suggested, the mid-April taking of these Christian and Muslim children makes abundantly clear: Extremist Islam is scared of little girls. These big, bad men who claim the imprimatur of God himself for their actions, quake in their sandals at the intelligence and potential of girls -- and the women they might grow up to be.

As well they should. A nation where women have access to education is a nation where Islamist extremists lose much of their power to cow and bully them. A little learning, as they say, is a dangerous thing.

The kidnappers concede as much in their very name: Boko Haram. It translates as, "Western education is a sin." The group issued a video this week. "I abducted your girls," says a man identified as group leader Abubakar Shekau. "I will sell them in the market, by Allah." The video is said to ramble for an hour, filled with condemnations of Western education. "Girls, you should go and get married," says Shekau.

The international response to all this can be characterized in a word: outrage. Protests and calls for action have risen from Dakar, Senegal to Los Angeles, Calif., to Washington, D.C., to London, England. A cross-section of luminaries -- Secretary of State , singer , Sen. , former Secretary of State and musician Questlove -- has demanded the girls' return.

I wrote this column to add my voice to theirs.

But I wrote it also because I felt a need to do more about this atrocity than talk about it. Which is how I happened to find online.

He is a retired educator in suburban Washington, D.C., but in the late 1960s, he was a volunteer in Nigeria. Though his service ended nearly 50 years ago, Hannans says that, like others who volunteered there, he feels a connection with the country that has endured the balance of his life. "The people are incredible in Nigeria," he says. "The culture is just so rich. ... They're very fun-loving people; they are very open and friendly."

So in 2003, he and a few colleagues formed a nonprofit organization, the . It offers scholarships for Nigerian girls, initially through a partnership with the Forum For African Women Educationalists, which works to provide education for women and girls in 33 African nations. Now it works with the , an NGO specifically targeting northern Nigeria. "There is a real disparity in girls' education up in the northern region," explains Hannans. "There's only like 4 percent of females that complete secondary school, so that tells you a lot about what's going on up there with this recent event."

PCNAF is a small group and it has made a small impact; by Hannans' count, they've assisted maybe 25 girls since '03. "Our scholarships are for a year for each one of our scholars. But is a lot of money, particularly up in the northern region."

No, it isn't a terribly significant gesture. Abubakar Shekau will never even feel the thumb in his eye it's meant to represent. Makes me feel better, though. Maybe you think that's crazy, and maybe you're right. But I tend to believe in the power of ripples in ponds.

There is method to this madness, too.