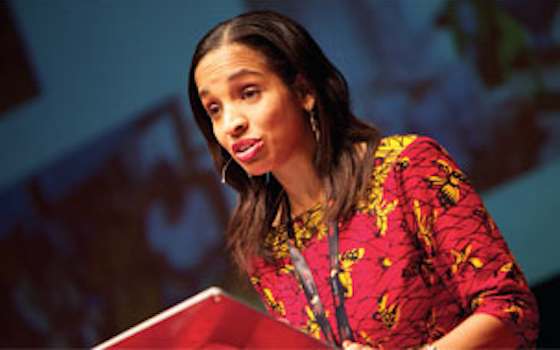 The Nigerian Diaspora is coming home, and not afraid to speak out on the need for political change

When sang "To be Young, Gifted and Black," she might have had Ndidi Nwuneli in mind: a degree from , a stint as management consultant with and named by in 2011 as one of the 20 Youngest Power Women in Africa.

On a trip to Ramallah, she was asked why she was in Palestine helping them while her country was in a 'mess'. The question prompted her to think about poor leadership in Nigeria. It filled her with rage, and led her to quit her job in the US and return to Nigeria to set up LEAP, a non-profit organization dedicated to breeding an 'army of committed change agents' -- young people, business owners and social entrepreneurs who cared about making a difference.

Her latest venture, moving into the for-profit arena, is an agribusiness and agro-processing company which aims to replace imports with locally sourced produce.

Ndidi attended a state-funded secondary school in Nigeria, and was lucky to have access to a university education in the United States. This marked her out as the stereotypical 'Nigerian in the diaspora'. Ndidi did not see this label as a status symbol, but recognized the responsibility it carried. On moving home, she refused to accept the way things were.

Many young Nigerians have experienced life in the West and developed a sense of how things could be in a well-run Nigeria. Many are investing their energy in projects to improve the daily lives of Nigerians.

Like Ndidi, , the founder of the online home video channel, iROKOtv, and , video blogger and founder of the hugely popular 'What's up Africa', are using new media to spread ideas out of Nigeria while creating sustainable businesses.

Ndidi, Ikenna, Jason and many other Africans like them have shared their stories at TEDxEuston, an annual event in London -- these days not necessarily being held in Euston -- where speakers drawn from the arts to business and public service hold discussions on African issues. It challenges the notion of the 'single African story' and encourages engagement.

A common theme is a passion to drive the continent to fulfil its potential. This message is amplified through social media and influences conversations all over the continent. There is increased optimism among Nigerians in the diaspora -- and in Nigeria too -- that democracy is here to stay. While acknowledging the challenges ahead, there is a consensus that building a better Nigeria will require ordinary people to get more involved in holding elected politicians to account.

The next frontier will be translating this engagement into real change in the way politics is conducted. Nigerian governments can no longer ignore political controversies for weeks, as they did in the past. The current Nigerian president has a special adviser on social media. His chief spokesman is on Twitter -- @abati1990 -- and has over 80,000 followers.

The sacking in January of Nigeria's top military chiefs was announced on Twitter. One of the most vibrant Nigerian citizen journalism websites, Sahara Reporters, is edited primarily by Nigerians in the diaspora, but draws most of its readers from within Nigeria, who fuel a lively comments section.

We live in interesting times. An increasing number of Nigerians are returning to re-engage with the country. Many are doing this primarily to participate in the economic opportunities that are emerging, and having spent time abroad, they are bold enough to voice opinions.

This mix of engaged citizens and social media platforms will play an increasingly important role in Nigerian politics. More savvy politicians are developing their social media skills and engaging their audiences in debates on the things that matter to them; others still ignore social media or outsource their presence, often to poorly qualified assistants. The effect of this activity on the 2015 elections in Nigeria is difficult to predict, especially as many poor Nigerians outside urban areas remain cut off from social media, but it is likely that this is the last generation of politicians who can ignore these trends.

As Ndidi Nwuneli has said, the biggest challenge for those in the diaspora is not to simply get angry but to channel that anger into the things that matter most, in building the country of our dreams. She calls this a 'rage for change'.

Ndidi reflects the ideas of a new generation of African thinkers and leaders, committed to re-engaging with the continent.