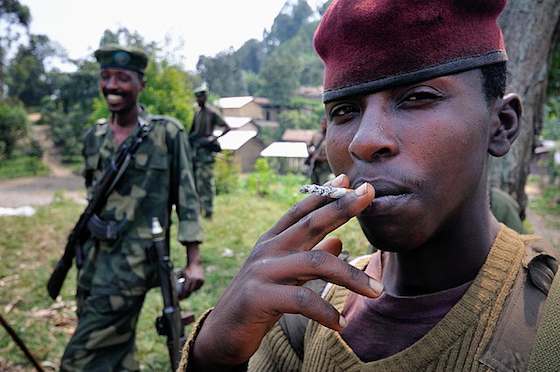 In a reprise of the military operation that helped secure independence for the Democratic Republic of the Congo in 1960, the United Nations finally got tough. It unleashed MONUSCO, its in-country peacekeeping force, to join forces with the Congolese Armed Forces in a full-scale military operation to route the rampaging rebel group, the M23. Too often peacekeepers have been reduced to bystanders, most shamefully in Bosnia and Rwanda.

U.S. ambassador to the UN and genocide authority Samantha Power is often taken to task for advocating humanitarian intervention in an age when many Americans of conscience believe it's only a cover for implementing our own agenda. The odds of that are rolled back to some extent when it's authorized by the UN. In a November 5 press release reacting to MONUSCO's success, she stated (emphasis added)

We look forward to the final declaration providing for the timely disarmament and demobilization of the M23, as well as accountability for perpetrators of war crimes and crimes against humanity. In this regard, we continue to call for the establishment of "mixed chambers," a hybrid domestic-international court that would prosecute the worst perpetrators of atrocities. We reiterate our calls for the DRC government to hold accountable all those who have committed abuses in the Congolese army, as well as militia members.

We know war criminals can be tried at the International Criminal Court in the Hague or, at the other extreme, testify before Truth and Reconciliation Commissions in cases where such large segments of the population are implicated, that realistically -- ostensibly, anyway -- it would be impractical to try them. But the concept of "mixed chambers" may be new to you, as it was to me. In fact, it's a product of the Human Rights Watch. From a 2009 document introducing the initiative, created specifically for the DRC.

Human Right Watch has worked closely and extensively with the Congolese justice system in a number of ways, including through providing materials and evidence to military and civilian prosecutors and monitoring trials, by taking part in national conferences to discuss reforms of the justice sector, and by working closely with Congolese partners to represent victims of crimes. Drawing from this experience, we have put forward the merits of creating a “mixed chamber” – a national judicial institution with the temporary inclusion of international staff – as a mechanism to hold to account perpetrators of war crimes, crimes against humanity and acts of genocide committed in the Democratic Republic of Congo.

Including international experts with knowledge about how to handle complex criminal investigations, prosecutions and trials can therefore be essential where exposure to and experience with such cases at the national level is more limited, such as in Congo.

Domestic turmoil, which, arguably (I haven't any statistics to hand) is at least as great a source of violence on a large scale as are foreign states or terrorists. Perhaps both MONUSCO and mixed chambers could pave the way, a generation or three hence, forone-world government. The former could help set a twenty-first century precedent for military intervention by a world body, thus circumventing the suspicions about motives, such as when the United States was contemplating intervening in Syria and when it and NATO attacked Libya. The latter could act as a prototype for judicial proceedings that don't make a state feel like a world body is interfering with its affairs, such as those of the ICC might, or that's too lenient, forgiving to a fault like truth and reconciliation commissions.