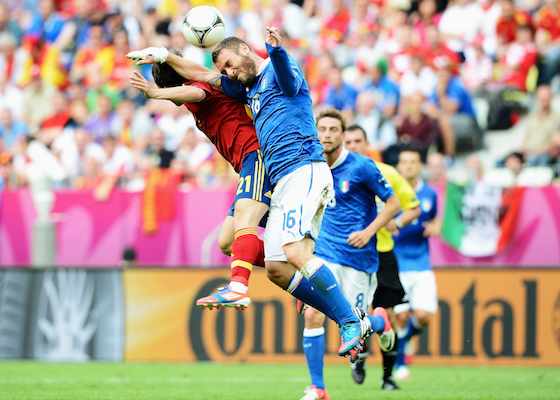 David Silva of Spain and Daniele De Rossi of Italy jump for the ball during the UEFA EURO 2012 group C match between Spain and Italy at The Municipal Stadium on June 10, 2012 in Gdansk, Poland. (Photo by Claudio Villa/Getty Images)

Rather than yield a positive result, Spain's false nine formation backfired as the reigning European champion was held to a 1-1 draw by Italy in the opening match of European Championship 2012 Group C at the PGE Arena.

Later, Croatia grabbed the lead in Group C with a 3-1 victory over Ireland at Stadion Miejski.

Before the match, Spain coach Vicente del Bosque announced he will not field a usual striker in his starting lineup, opting to play Cesc Fabregas instead of forward Fernando Torres.

Although the formation had its moments of promise, the lack of offensive firepower from a legitimate striker doomed Spain's chances of starting its title defense with a victory.

Substitute striker Antonio Di Natale drew first blood for Italy in the 60th minute, finding the corner of the net past Iker Casillas from a wonderful pass by Andreas Pirlo.

Fabregas delivered for Spain four minutes later, slamming the ball past Gianluigi Buffon from a pass by David Silva.

After 74 minutes, Del Bosque finally inserted Torres into the line-up but he missed several opportunities that could have given Spain the lead.

Torres tried to round Buffon but the Juventus goalkeeper made a clean tackle and 10 minutes later, his attempt went harmlessly over the goal.

"We could have won or lost. I would not say it's a setback, but is a result that could have been better. We have to win all of our remaining matches now. What matters is that Spain must win whatever the situation or the opposition," Torres told goal.com after the game.

Meanwhile, Mario Mandzukic scored in the third minute with a header against Shay Given before Ireland tied the count behind Sean St. Ledger's header in the 19th minute.

Croatia regained the lead after Nikica Jelavic scored outside the six-yard box in the 43rd minute before Mandzukic sealed the victory with another goal in the 48th minute.

The victory propelled Croatia on top of Group C with three points with Italy and Spain tied in second with one point apiece.

To keep its hopes alive, Ireland needs to win against Spain while Croatia next faces Italy Thursday.

Italy Hopes to Get Key Players Back vs Germany

England and France Move On to Euro 2012 Quarterfinals

Spain And Italy Move on to Euro 2012 Quarterfinal Round