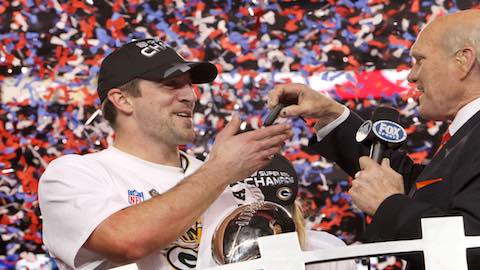 Green Bay Packers quarterback Aaron Rodgers was voted the winner of the Pete Rozelle Trophy, awarded to the Super Bowl XLV Most Valuable Player. Rodgers, 25, completed 24-of-39 pass attempts for 304 yards for a passer rating of 111.5 in leading the Packers to their fourth Super Bowl championship.

"He played great. We put everything on his shoulders. He did a lot at the line of scrimmage for us against a great defense. He did a hell of a job."
-- Packers Head Coach Mike McCarthy on Aaron Rodgers

The award is chosen by a panel comprised of 16 members of the Pro Football Writers Association of America, selected members of the electronic broadcast media and interactively through the National Football League's official website, NFL.com.

Rodgers collected 17.5 votes of the possible 20 cast in the process, with Packers wide receiver Jordy Nelson collecting two votes and Packers linebacker Clay Matthews garnering half a vote. More than 1.64 million fans voted for the award. 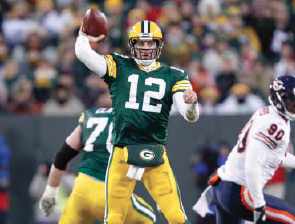 Later in the second quarter, Rodgers took advantage of an interception by Green Bay defensive back Jarrett Bush and promptly tossed his second touchdown pass of the game, a 21-yard strike to wide receiver Greg Jennings.

Rodgers finished the first half of play with 11 completions on 16 pass attempts for 137 yards, two touchdown passes and a passer rating of 134.6 as the Packers took a 21-10 lead into halftime.

In the second half, Rodgers completed 13-of-23 passes for 151 yards and another key touchdown pass to Jennings.

In a pivotal drive with the Packers holding a 28-25 lead, Rodgers marched the Packers 75 yards in 10 plays, completing four-of-five passes on the drive for 64 yards. The Packers took 5:27 in time of possession off the clock on their final scoring drive and widened their lead to 31-25 after Crosby's 23-yard field goal, which proved to be the final margin.

On being named MVP, Aaron Rodgers:

"It's a special honor to be one of the leaders of this football team. I've said it once and I'll say it again: no one person has ever won a game by themselves. This is a team effort and a great group of men. Special guys, and I'm just blessed to be one of the leaders on this team. Individually, it's the top of the mountain in my sport -- my profession. It's what you dream about as a kid and think about in high school, junior college, D-I: getting this opportunity and what would you do? I'm fortunate and blessed to play for a team that believes in us. At the same time, I wanted to make sure I was the most prepared guy on the field to have this type of performance."