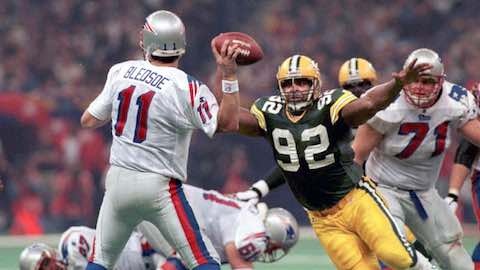 Desmond Howard picked the grandest of stages to carve out his niche in NFL history, totaling more than 250 combined yards on his kickoff and punt returns in a 35-21 win over New England. The key play to his selection as MVP was a 99-yard kickoff return touchdown that dashed hopes of a comeback by the Patriots. Signed as a free agent in the offseason, the former Heisman Trophy winner from Michigan helped the Packers to their first Super Bowl title since the Lombardi era.

Super Bowl XXXI featured two teams that were considered losing teams for much of the late 1980s. The Packers' fortunes turned after head coach Mike Holmgren and quarterback Brett Favre joined the team in 1992. The Patriots' rise began in 1993 when Bill Parcells was hired as head coach, and the team drafted quarterback Drew Bledsoe. Under their respective head coaches and quarterbacks, the Packers posted an NFC-best 13--3 regular season record, while the Patriots advanced to their second Super Bowl after finishing the regular season with an 11--5 record.

The game began with both teams combining for a total of 24 first-quarter points, the most in Super Bowl history.

It was Favre's arm that struck first, as he hit Andre Rison for a 54-yard touchdown pass on the Packers' second play from scrimmage to take a 7-0 lead. Two plays later Doug Evans made a diving interception of Drew Bledsoe's pass at the 28-yard line, setting up Chris Jacke's field goal and giving the Packers a 10-0 lead just 6:18 into the Super Bowl.

The Patriots answered with touchdowns on their next two possessions. Craig Newsome's pass interference penalty set up the first touchdown and a 44-yard completion from Bledsoe to Terry Glenn preceeding Ben Coates's touchdown gave New England its first and only lead. The 24 combined first quarter points were the most in Super Bowl history.

Green Bay struck again 56 seconds into the second quarter as Favre hit Antonio Freeman with a Super Bowl-record 81-yard touchdown bomb. Jacke booted his second field goal on Green Bay's next possession. After a Mike Prior interception, Favre orchestrated a 74-yard, nearly 6-minute drive that concluded with a diving Favre touching the ball against the pylon to give Green Bay a 27-14 halftime lead.

Curtis Martin brought the Patriots to within a score by running in from 18 yards out with 3:27 left in the third quarter. But Howard broke the Patriots' spirit by returning the ensuing kickoff a Super Bowl-record 99 yards. Favre found Mark Chmura for the 2-point conversion to finish the scoring.

Bledsoe was intercepted twice in the fourth quarter as the Patriots never crossed midfield in four fourth-quarter possessions.

After the game, Favre reflected on his long road to becoming a Super Bowl champion, which included the death of his friend Mark Harvy in a car accident during the season. "Through everything I really believed I'd be here today. Right here in this stairwell, talking about being world champions. My best friend's gone forever. Trouble never seems to be far away, and the future won't be all rosy, but they can't take this away from me. Thirty years from now, the kids will be getting ready for Super Bowl LXI, and NFL Films will drag out Steve Sabol -- he'll be around 102 then -- and he'll talk about how Brett Favre fought through such adversity. And there will be other players and coaches. But I know this: We etched our place in history today."

Antonio Freeman was the top receiver of the game, finishing with 105 receiving yards and a touchdown on only 3 receptions. Dorsey Levens was the game's leading rusher with 61 rushing yards, and caught 3 passes for 23 yards. Favre completed 14 out of 27 passes for 246 yards and 2 touchdowns, and had 12 rushing yards and another touchdown on 4 carries. Favre became the first Super Bowl-winning quarterback to have at least three touchdowns (2 throwing, 1 rushing) and not be named Super Bowl MVP. 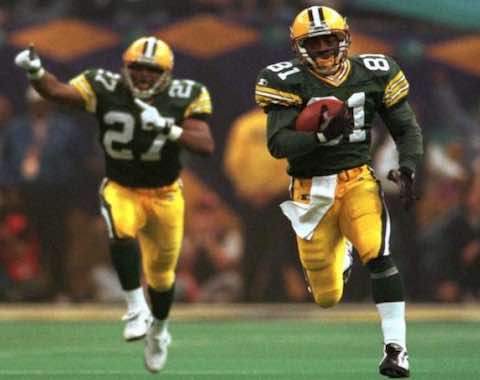 The key play to his selection as MVP was a 99-yard kickoff return touchdown that dashed hopes of a comeback by the Patriots. Signed as a free agent in the offseason, the former Heisman Trophy winner from Michigan helped the Packers to their first Super Bowl title in 29 years.

Desmond Howard enjoyed a celebrated college football career, winning the Heisman Trophy while starring at the University of Michigan in 1991. His pro football career, however, was judged more by potential than actual production.

But in 1996, Howard finally made his mark in the NFL. He picked the perfect stage, too, to showcase his ability -- Super Bowl XXXI. 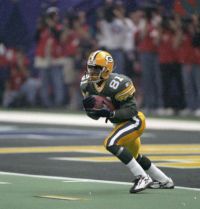 Signed as a free agent, Howard found his niche as the Packers' return specialist. He led the NFL with a 15.1-yard punt return average and punt returns for touchdowns with 3. He took back a punt 92 yards for a TD in Green Bay's regular-season finale against Detroit and continued his roll into the postseason.

Against the 49ers, Howard set a team record with 117 punt return yards on just two attempts, including a 71-yarder. In the NFC Championship Game against the Panthers, Howard returned 4 kickoffs for 104 yards, including a 46-yarder, as the Packers advanced to their first Super Bowl in 29 years.

Then against New England at the Superdome, Howard made his mark in Super Bowl lore, personally putting a stop to the Patriots' third-quarter comeback with a record 99-yard kickoff return for a TD.

Ironically, Howard didn't think he had a chance at winning the MVP. "I really didn't expect them to be kicking the ball that much," he said.

Howard got his kicks -- and then some -- in Super Bowl XXXI. 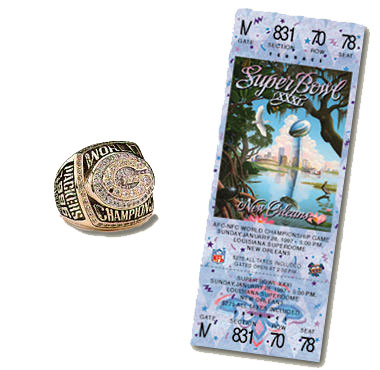