United States Ties with Mexico's Military Have Never Been Closer 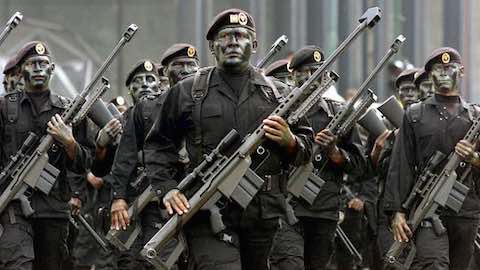 United States Ties with Mexico's Military Have Never Been Closer

The United States continues to provide military support and equipment to Mexico in order to help combat its drug cartels. Unfortunately, all is not what it seems. As Jesse Franzblau reminds us, some of the aid has gone to rights-violating security units and even fallen into the hands of the cartels.

The kidnapping and disappearance of 43 students from a teacher-training college in Ayotzinapa, Guerrero has sparked renewed attention to the devastating effects of the U.S.-backed drug war in Mexico. More than six months have passed since the students’ disappearance, and while dozens of police officials and local drug gang members have been arrested, the investigations are marred with allegations of coerced confessions, and investigators are accused of covering up the truth by suppressing information.

Currently, a “caravan” of family members of the victims is traveling around the U.S. to bring attention to the terrible consequences of the war against drugs in Mexico. Felipe de la Cruz Sandoval, spokesperson for the group of parents and a member of the Rural Teachers College of Ayotzinapa Guerrero, said the caravan aims “to shed light on the foreign policy of the United States, specifically the Mérida Initiative and its connection with the socioeconomic conditions and violence in Mexico.”

The Mérida Initiative was negotiated behind closed doors between former presidents George W. Bush of the U.S. and Felipe Calderón of Mexico in March 2007, and was inaugurated in December 2008. The former U.S. ambassador to Mexico, Antonio O. Garza, said months before it was approved that it was “the most aggressive undertaking ever to combat Mexican drug cartels.” U.S. funding for judicial processes, forensic services, investigative capacity, and Mexico’s judicial reforms doesn’t seem to have had much impact so far: impunity remains rampant in Mexico, with 98.3 percent of crimes going unpunished . According to a recent U.N. report, Mexican security agents regularly engage in torture. The U.N. Committee on Enforced Disappearances has also found that the problem of disappearances of civilians at the hands of the police and military is worsened by the government inaction.

I recently discussed these issues, by email, with Jesse Franzblau – a policy analyst who has been researching U.S. foreign policy and human rights in Mexico and Latin America since 2006. Franzblau has carried out research and written articles for the National Security Archive, The Nation, Al Jazeera, NACLA, Columbia Human Rights Law Review, the Universidad Nacional Autónoma de México’s Law Review and other outlets. Last year he was nominated, along with Mike Evans of the National Security Archive, and three Mexican journalists Carmen Aristegui, Daniel Lizárraga and Irvin Huerta (all formerly of Mexican news network MVS Noticias ), for the 2014 Gabriel García Márquez Award for investigative journalism for their coverage of secret U.S. surveillance programs in Mexico.

Q: Can you provide some background on U.S. security assistance, training, and intelligence sharing in Mexico?

The U.S. has maintained a strong presence in Mexico, and has had a deep influence on the country’s political, social and economic affairs. Mexico was strategically important during the Cold War, when the CIA relied on Mexico’s high-level government officials for intelligence, including security chiefs, government ministers, and former presidents of the PRI [Institutional Revolutionary Party] governments, which ruled the country unabated for seven decades straight, until 2000. The CIA maintained contacts with the upper-echelon of the PRI throughout the “Dirty War” period of the 1960s-80s; when three successive presidential administrations orchestrated systematic campaigns of violence against social movements. Intelligence gathering was a high-priority in Mexico for the U.S. during this period, and human rights were not a concern. The U.S. was well-aware that the Mexican government was committing grave human rights violations , but made no effort to publicize the fact to Congress, or elsewhere.

Declassified U.S. documents on watershed events, such as the infamous 1968 Tlatelolco Massacre of student protestors, show that the CIA helped protect Mexico’s ruling party from bearing responsibility for the massacre, delivering a misleading account of the killing back to Washington. The U.S. was also supporting the counterinsurgency campaign waged in Guerrero against the guerrilla movement led by Lucio Cabañas, a teacher from the Ayotzinapa teacher-training normalista school, in the early 1970s, which led to hundreds of enforced disappearances.

U.S. intelligence, mainly FBI and CIA, also worked closely with Mexico’s now-defunct Federal Security Directorate (DFS), which carried out urban counterinsurgency campaigns that led to enforced disappearances. The DFS became so closely intertwined with drug trafficking in the 70s and 80s that it was disbanded in 1985 following revelations that it was behind the murders of a DEA agent and a Mexican journalist. After the DFS was abolished, some 1,500 unemployed agents found their way into organized crime, and brought [with them] their training in covert activities and brutal counterinsurgency operations.

After the end of the Cold War, the U.S. continued to exert significant influence in Mexico under the pretext of fighting drugs, launching new counterdrug and border security programs in the early 1990s. Training for security forces increased, including counterinsurgency military training for special forces units, such as the army’s elite Grupo Aeromóvil de Fuerzas Especiales (GAFE). Members of the GAFE later defected to provide protection for the Gulf Cartel, and went on to form the notorious Zetas criminal organization, bringing the army’s most sophisticated weaponry and surveillance equipment with them.

This is just some of the background on the roots of the type of criminal organizations that operate in Mexico today that have a history of government training, and deep links to the state.

Q: What has happened in Mexico since the advent of the Mérida Initiative?

Since 2008, the U.S. government has spent nearly $3 billion [PDF] on security aid to Mexico through the Mérida Initiative and through the departments of Defense and Justice. Much of this aid actually goes to contracts with U.S.-based defense firms, who make millions on everything from helicopter training to communications equipment and computer software to night-vision goggles, surveillance aircraft, satellites, etc. Christy Thornton wrote in a New York Times op-ed that this aid comes in addition to the direct sales of arms and other equipment to Mexico authorized by the State Department, which totaled $1.2 billion in 2012 alone. Last year, the figure reached over $1.15 billion in military equipment.

Training for security forces has skyrocketed. According to the U.S. Embassy, from 1996-2009, the U.S. trained nearly 5,000 military personnel. According to foreign assistance data , from 2010 through 2013, U.S. training reached over 8,000 members of Mexico’s security forces. In 2009, the U.S. Embassy reported internally that the cooperation with Mexico on intelligence and counternarcotics had never been better. In 2010, they noted that U.S. ties with Mexico’s military had never been closer in terms of equipment transfers and training, as well as intelligence sharing.

Q: What are some of the cases where we see U.S. aid going to security units connected to abuses?

Documents with information on the implementation of the Mérida programs contain regular reports on state involvement, complicity, and cover-up of human rights abuses. This includes intelligence authorities, migration authorities, military officials, and police. One document from June 2011 [PDF], for example, reported on a visit of U.S. officials to Tamaulipas in May 2011 to assess training needs for state security forces. The visit came as Mexico's federal authorities were trying to cover up the discovery of mass graves of victims of recent massacres in the region (the San Fernando Massacres). Even as U.S. officials were reporting on state involvement in the massacres, the embassy recommended further training for Tamaulipas security forces. The same document, from June 2011, discusses migration authorities implicated in kidnappings of migrants. Further down, it reports on the delivery of biometric data equipment to the same agency (the National Migration Institute, or INAMI).

U.S. training programs have at times extended to government agencies in states where drug trafficking organizations were, according to U.S. Embassy accounts [PDF], operating with near total impunity, in the face of “compromised local security forces.” U.S. Embassy and DEA officials, for example, were carrying out training programs for police from Nuevo León as U.S. Consulate officials were reporting that the security apparatus in that state had been compromised, with the governor admitting [PDF] that some state and police officials had been co-opted by the Zetas. The programs continued even while DEA officials reported on the arrests [PDF] of 13 active-duty and retired law enforcement officials in the state of Nuevo León, including directors of the federal police, for providing protection and assistance to drug-trafficking organizations.

In one of the more recent cases, the military battalion responsible for the extrajudicial killing of 22 young people that took place in June in Tlatlaya, Mexico State, had received U.S. training. The CIP Americas Program reported that the State Department confirmed that five individuals from the battalion were trained by U.S. agencies.

Q: What are the types of sources you are using to document U.S. security assistance, organized crime and human rights abuses in Mexico? What do the documents reveal?

The archival orbit of U.S. and Mexico declassified and leaked internal government records provides a wealth of information on the specific types of assistance, training programs, and equipment provided under the pretext of fighting drugs.

The documents include files released in response to requests filed through Mexico’s access-to-information law. For example, last December, I obtained adocument [PDF] from Mexico’s attorney general’s office with new information on police connections to the Zetas in the case of the San Fernando massacres, leading to widespread media attention in the Mexican and U.S. press. The release of the document also opened the pathway for disclosure of official records on the June 2014Tlatlaya killings andattempted cover-up, and army files relating to the Ayotzinapa student disappearances.

The disclosure of such documents has brought about a renewed discussion on state secrecy with respect to human rights atrocities. It also raises questions about the current role of the U.S. in aiding the cover-up of such abuses, as it did during the Dirty War years. As Mexico’s prominent historian and critical writer Sergio Aguayo said after the disclosure of the San Fernando document, the disclosure tells us what we have known for some years; that the U.S. is helping the Mexican government cover up information about grave human rights violations. Indeed, a thorough analysis of internal government files, released through Freedom of Information requests or through leaks, reveals a pattern of abuses and cover-ups, as U.S. reporting on the implementation of the Mérida programs parallels regular reporting on institutional state links to organized crime and abuses.

Mateo Crossa is an International Program Intern with the Center for Economic and Policy Research.