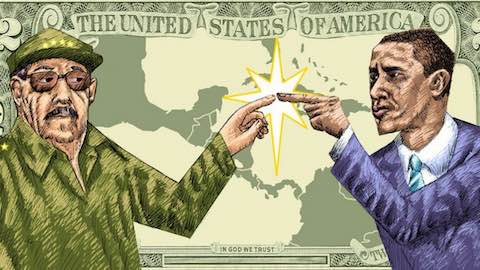 The road ahead for U.S. - Cuban relations is rocky, but at least it's new.

For the small island country of Cuba, the Seventh Summit of the Americas in Panama marked a kind of “coming out” party.

Banned from the for-capitalists-only gatherings from the time they began in 1994, Cuba was not only invited to participate in the summit this year, it was the belle of the ball (albeit the “belle” was a shaky, 83-year-old Raul Castro, who lacks his brother Fidel's charisma). Cuba's presence was heralded in the speeches of every nation's leader, and the handshake between President Obama and Raul Castro was the summit's Kodak moment.

In Raul Castro's long. 49-minute speech (in which he joked that because Cuba had been excluded from six prior summits, he deserved six times the recommended eight minutes), he gave a history lesson of past U.S. attacks on Cuba -- from the Platt Amendment to supporting the dictator Fulgencio Batista to the Bay of Pigs invasion and the opening of the Guantanamo prison. But he was gracious to President Obama, saying he was not to blame for this legacy and calling him an “honest man” of humble origins.

President Obama certainly won praise throughout the summit for turning this page in the Cold War. Some leaders insisted on clarifying, however, that Cuba was not at the summit because of Obama's nice gesture: Cuba was there because the leaders of Latin America insisted that there would not be another summit without Cuba. Colombia President Juan Manuel Santos, no lefty, recalled his position at the last summit, which he hosted, that Cuba must be invited to the next one. Bolivia, Nicaragua, Venezuela, and others had threatened to boycott any new gathering without Cuba.

Argentine President Cristina Fernandez Kirchner went a step further in taking credit away from Obama. She said Cuba was at the table because it had fought valiantly and defiantly for over 50 years while suffering under the U.S. blockade. Ecuador's Rafael Correa said the Obama's opening was good, but not good enough. He insisted it was time to end the “inhumane and illegal blockade” that had so damaged the Cuban people and to return the “occupied territory” of Guantanamo. Bolivia's Evo Morales dismissed any notion of the United States as a benevolent force now coming to aid poor Cuba. Instead, he said, the U.S. should justly compensate Cuba for over 50 years of damages to its economy.

There were expectations that President Obama would use the summit to announce that Cuba would be taken off the U.S. list of state sponsors of terrorism, a critical step in the normalization of relations. Unfortunately, that didn't happen at the summit, though Obama did recommend it a few days later.

It's hard for many Americans to understand the oversized significance Cuba has in the hemisphere.

Colombia's Santos thanked Cuba for its mediation of peace talks between his government and the FARC rebels. Other governments thanked Cuba for sending doctors to their countries, treating patients in poor areas where their own doctors refused to go, and for setting up medical schools or training their nationals in Cuban schools. There was praise for Cuba sharing its successful literacy program.

But what most North Americans fail to understand is the pride felt by so many people in Latin America -- even people who don't like Cuba's policies -- that for over 50 years, the tiny island has managed to fend off attempts by the U.S. goliath to overthrow it.

From the very beginnings of the Cuban revolution, the U.S. government has used every means it could conjure up to overthrow Fidel Castro -- from poison cigars to funding saboteurs to diplomatic isolation. History is littered with CIA and exile-sponsored dirty tricks, including the October 1976 attack on a Cuban jetliner that killed all 73 people aboard. Even in Panama, where the summit took place, there was a plot in November 2000 to kill Fidel Castro by blowing up an auditorium where he was scheduled to speak.

So the fact that Cuba has managed to thumb its nose at the United States for all these years is seen by many as nothing short of a miracle. “I was in Cuba on vacation,” Gabriela Gomez, a teacher from Panama told me. “I found its economy in tatters, with buildings literally falling apart. And I don't like the restrictions on free speech and free assembly. But I love the fact that Cuba has managed to survive as a communist nation in the face of so much outside aggression.”

But is the U.S. government really accepting Cuba as a sovereign nation that has chosen a different path? Or is it simply trying to overthrow the Cuban government by different means?

Reverend Raul Suarez, who runs the Martin Luther King Center in Havana, was in Panama for the civil society forum that preceded the Summit. He sees the same old intrigue, interference and manipulations. “Just look at what has happened at the civil society forum,” he said. “The Americans paid for Cuban dissidents who have no following in Cuba to come to Panama and participate as Cuban representatives of civil society. Meanwhile, many of the representatives of Cuba's mass-based organizations were not allowed in.”

“Half our delegation got here only to find that they couldn't get the credentials they were promised, and were shut out of the meetings,” said Gretchen Gomez Gonzalez of the Cuban Federation of University Students, “while dissident Cubans who don't represent anyone but themselves were given credentials to represent Cuban civil society.” Pro-government Cubans confronted the dissidents in the streets and at the meetings, calling them mercenaries for taking U.S. money and carrying photos showing some of them embracing convicted Cuban-American terrorist Luis Posada Carriles. They also say that former CIA operative Felix Rodriguez, blamed for killing revolutionary hero Che Guevara, was at the summit working with the dissidents.

The dissidents insisted they were being attacked by pro-government mobs simply for promoting free speech and free assembly. The U.S. State Department condemned what it said was “harassment” and “use of violence” against participants.

The cordial meeting between Obama and Castro showed the positive face of the opening, while the clashes on the streets of Panama City represent the rocky road ahead for U.S.-Cuba relations. But at least the path forward is a new one, with fresh momentum emanating from the Panama summit.

Obama said the U.S. opening could lead to more Americans visitors, more commerce, more investment, and more resources for the Cuban people. If the U.S. government could do that while leaving it to the Cuban people themselves to push for greater individual freedoms, that would be -- to take a page from the Castro brothers -- truly revolutionary.

Medea Benjamin is the cofounder of CODEPINK and the author of several books on Cuba.