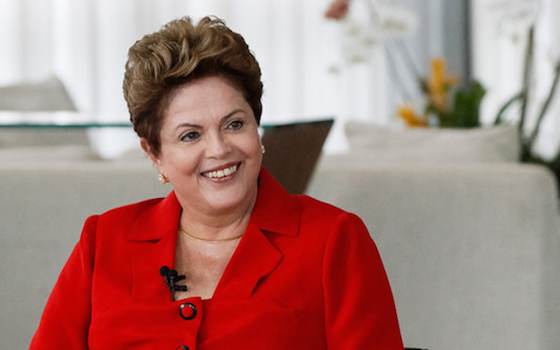 The presidential elections in Brazil on October 26 resulted in a narrow win by incumbent president Dilma Rousseff, from the Workers' Party (PT, Partido dos Trabalhadores). Her opponent, Aécio Neves from the center right Brazilian Social Democratic Party (PSDB, Partido da Social Democracia Brasileira), was ahead in the polls by a narrow 51 to 49 percent margin until mid-October. However, as the election date approached, Rousseff took over this narrow lead with a 53-47 percent advantage in the late polls and won with a 51.6 percent support against 48.4 percent for Neves.[i]

The campaigns run by both candidates were negative and aggressive with continuing mutual accusations of corruption. Big mainstream media tended to be on the side of Neves. This was exemplified with the early publication of the weekend issue of the weekly magazine Veja. Its cover accused president Rousseff and ex-president Lula of knowing about the on-going, major corruption scandal involving the improper use of Petrobrás funds for election campaigning.[ii] In the international press, The Economist similarly endorsed Neves based on a range of arguments that boiled down to the view that Brazil needed the reforms and policies he was promising to implement if elected.[iii] Voting behavior was clearly divided along regional and class lines. The poorest social groups dwelling in the most impoverished parts of the country and the most resource deprived areas of the large cities voted for Rousseff in a large majority, while Neves commanded a majority of the vote in the richest regions and an increasingly large majority in the higher income cohorts of voters.

The two candidates promoted two quite different national projects in terms of both how to foster the country's economic and social development, and how to measure Brazil in terms of its "place" and "role" in the international political system.[iv] Neves called for a market-oriented project characterized by economic openness, tax reductions, strict budgets and a reduced role for the state in the economy as the way to best stimulate renewed economic growth. He promised to maintain the popular Bolsa Familia program that redistributes small economic allowances to society's poorest families.[v] According to his national project for Brazil, the country should particularly develop closer ties with traditional Western powers like the United States, the European Union (EU) and their linked markets.[vi] Rousseff favored a mixed economy with a key role to the state in managing economic growth, with the active use of public banks. She continued to emphasize and expand on social policies targeted at the poor as well as promoting universal social services. At the same time, she stressed a continued focus on fiscal responsibility. According to her project for Brazil, the country should continue the autonomistline of diversifying relations with a priority given to regional integration and effective South-South cooperation.

At this moment, the future outlook for the country remains uncertain. Financial markets and the stock exchange in São Paulo reacted negatively to the victory of Rousseff and the coalition government led by the PT, but are now in recovery. The new government faces significant challenges in assuring renewed economic growth in a context of mild economic recession, difficulties at reaching the government's budget and inflation goals. Meanwhile, the population express persistent expectations in terms of a continued expansion of a Brazilian welfare state-like arrangement that has been under construction during the democratic period since 1985.[vii] An expansion of inclusionary social policies and universal welfare state services has been a priority during the ruling epoch of the PT and its supporters expect this to continue. At the same time, the country needs to unite politically in order to develop a compelling vision for the country based on dialogue between different interest groups and classes in the context of growing political polarization.

Brazil aims to promote a multi-polar ordering of the world. This suggests that the Global North centered on the Western heartland of the United States and the EU is likely to face a continued challenge. Emerging powers from the Global South, such as Brazil, are becoming more prominent in terms of leadership and are beginning to greatly influence various world regions and multilateral institutions.