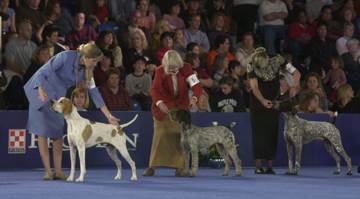 Arguably, even more than the legendary parade, the dog show, hosted by the , has a little something for one everyone in the family. That's a rarity on TV these days, when most programs concede they target an increasingly fragmented audience. Like the old "Ed Sullivan Show" (which invariably featured a dog act), the National Dog Show appeals to children and seniors, men and women, even families without dogs. It seems that watching the dogs prance proudly around a ring, and offering at-home commentary is universally appealing.

"If you have a dog, it's the alma mater factor; you compare your own dog lying on the sofa next to you with the Champion Golden Retriever or Brittany you see on TV," says David Frei, returning as one of the two show commentators. "Everyone (watching at home) wants to play dog show judge."

Also providing commentary will be John O'Hurley, actor (J. Peterman on "Seinfeld") and author ("Before You Dog Can Eat Your Homework. First You Have to Do It: Life Lessons From a Wise Old Dog To A Young Boy").

After nearly a lifetime of living with dogs, more than three decades of showing dogs, and 20 years broadcasting the famous Westminster show, Frei is still awed by what dogs can do. After his first experiences watching animal-assisted therapy dogs in action, Frei certified his own dogs as therapy dogs, and four years ago started a therapy dog program called Angel on Leash (www.angelonaleash.org). The non-profit program began as a charitable activity of the , but today supports therapy dog activities at 11 sites, including in New York City; Ronald McDonald Houses in New York City and Milwaukee, WI; , Memphis, TN; in New York City, and of Milwaukee, Wis.

Angel on a Leash is the perfect name for the program because that's what these dogs are, living angels. They visit children and adults undergoing cancer treatments, Alzheimer's patients, people in rehabilitation centers and even in hospice care. In animal-assisted activities or basic petting programs, trained and socialized animals are brought into facilities for patients to pet. In animal-assisted therapy settings, the dog becomes a part of the actual therapy regime. For example, for stroke patients, gripping and tossing a tennis ball to a dog is both therapeutic and fun.

"Of course, the dogs offer unconditional love," says Frei. "They don't care if the patient is a burn victim or in a wheelchair."

A special guest at this year's National Dog Show will be Rufus, the Colored Bull Terrier who won the show in 2005, then went on to snatch Best in Show the following February at Westminster. Rufus is a certified therapy dog, working mostly with kids.

"Rufus dispels so many myths," says Frei. "Some communities target the breed, calling them dangerous merely based on appearance. Of course, it's ridiculous, and Rufus is out there proving how ridiculous it is. He adores children. He's also proof that show dogs are out there, participating in world, doing much more than appearing at dog shows."

During the broadcast, Frei will take advantage of the opportunity to tell an audience of about 20 million what therapy dogs can do.

It's interesting that since 2004, most Westminster winners have become working therapy dogs.

Josh, a Newfoundland, took Westminster and the country by storm in 2004. Between TV appearances, he helped out seniors. Today, a senior himself, Josh is retired.

James, an English Springer Spaniel, was already a working therapy dog when he won Westminster in 2007. Frei says, "He may be the best therapy dog I've ever seen. He instantly knows what specific patients need. You can capture it in photographs -- just look at James and look at the eyes of the patients -- and their connection with one another."

Uno the Beagle who won Westminster in 2008, is a working therapy dog, and like most Beagles, he's not shy about telling everyone (mostly children) what he thinks.

Of course, Frei doesn't know why so many recent Westminster winners are also therapy dogs. It could be coincidence. It could be these show dogs, who were well socialized and trained to control their impulses in the ring, are particularly good prospects for therapy dogs.

In any case, being former Westminster winners, they're all terrific ambassadors. As a result of the PR generated by the dogs, and from Frei himself, trained and certified therapy animals and the good they do is increasingly accepted in all sorts of agencies -- from nursing homes to rehab facilities and hospices.