Dogs: How to Play Soccer With Your Dog 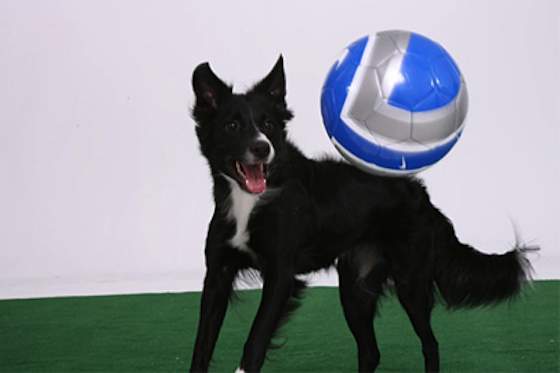 While it may be hard to imagine your beloved Fido out on a field dribbling a soccer ball, shooting on a goal and scoring, in fact there are many dogs that do just that—and love it! Whether you've seen them strut their stuff at a half-time show, on a TV talent competition, or in family films like 1999's Soccer Dog: The Movie, here are three reasons we can't get enough of dogs playing soccer.

When Mark Lucas saw a dog dribble a soccer ball at the halftime show of a professional soccer game, he became determined to train dogs the same way. Soon after, he founded Soccer Collies, a troupe of dogs who can run with the ball, bounce it off their noses, and even catch it between their paws and their chin. Lucas brings his dogs to interact with kids and adults at schools, charity functions, and sporting events. BEK and Ms. Z, his two beloved Collies, are even able to shoot (and score!) on a goal.

The first step in teaching a dog to play soccer is finding out whether they're 'ball motivated,' says Lucas. The simplest way to figure that out is to bounce a basketball in front of them. If they seem excited and eager to play, then they will likely enjoy learning tricks with a soccer ball. "All breeds that like a ball will play soccer," Lucas added. At first your pooch might not know quite what to do with a ball that's too big for him to pick up in his mouth, but soon enough he'll figure out how to pounce on it and move it with his paws. "People shouldn't get discouraged, it does take time," says Lucas. Start simple by having your dog bring you the ball. If you reward him with praise and treats, he'll be much more inclined to keep up the good work. Of course, it becomes even more fun when you get in the game and run, pass, and steal.

In the wild, dogs spend their days moving, running, and scrounging for food. Domestic dogs, on the other hand, often spend their days relaxing, sleeping, and lounging around. That's why walks and play are so incredibly important for keeping your dog healthy and happy. Dogs that aren't getting enough physical activity often display negative behaviors like digging, chewing, barking, jumping, hyperactivity, and sometimes even aggression. Getting your dog to run around with a soccer ball is a great form of exercise, not to mention an opportunity for you and your dog to bond. "The dogs are getting a great physical workout," says Lucas, "and they're also getting a mental workout. The more you play, the more they want to play, and that's how they get to be so good."

Dogs: How to Play Soccer With Your Dog