Dogs: What Is Freestyle Dancing With Dogs? 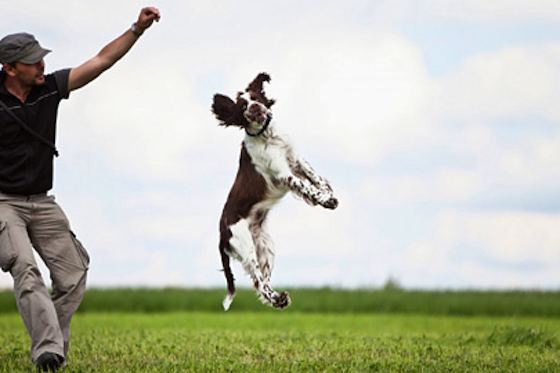 If you've ever seen a dog dance, then you know it can be hard to look away. There is something incredibly captivating about watching a canine cut a rug, and in recent months, the sport -- which is officially called Canine Freestyle -- has been featured on America's Got Talent, Chelsea Lately, 20/20 and more. People just can't seem to get enough.

So, what is it, exactly?

Canine Freestyle had its beginnings in Canada in the late eighties/early nineties, but when dog lovers in England and the United States caught wind of the new phenomenon, it quickly spread. It is thought to have been inspired by the competitive equestrian sport, dressage, and today it's a recognized event at dog shows and competitions around the world.

Simply described, it's a display of an owner and their dog's obedience training and tricks set to music.

The first step in teaching a dog to dance is making sure it's well trained. One of the first skills he'll need to acquire is the ability to heel on both sides of your body, as opposed to just the left side, which is traditional.

Some of the most popular (and impressive!) freestyle moves include weaving in and out of the owner's legs, spinning, jumping, rolling over, scooting backwards and the dog standing and 'dancing' on its hind legs. Some of the shows for beginners allow the handlers to use treats and toys during the performance, while the more advanced dancers do not.

In some competitions, costumes have become an important part of the acts and are coordinated with the music choice. And while many, many hours of training go into each routine, the cuteness factor of the sport has certainly served as great publicity, helping to get a younger generation of dog handlers interested in competition and racking up millions of views on beloved YouTube videos, like this one.

Handlers rave about the bonding that takes place when you spend one-on-one time with your dog daily during training for Canine Freestyle, and those relationships play a huge role in the performances. Audiences love to see pair who seems to be having fun and enjoying each other's company.

Then again, what's not to love about a dog wearing a bowtie dancing to disco?

Dogs: What Is Freestyle Dancing With Dogs?