When Should You Tell Your Dog 'No'? 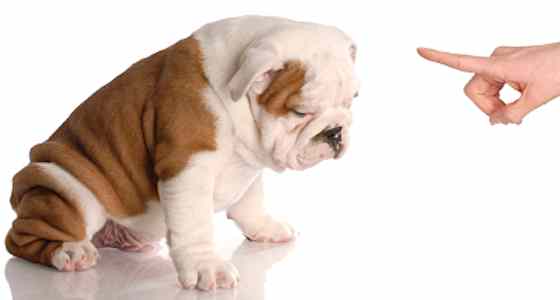 I recently read that clicker trainers tell people not to say "No" to their dogs, and I wondered where that idea came from.

We certainly advocate concentrating on what your dog is doing right and rewarding that. For example, if you're teaching heeling, you click-and-treat when your dog is in the correct position rather than leash-popping or scolding all the times when your dog isn't. But few people are really inclined to say "No" to train new behaviors -- it usually comes when we're trying to stop unwanted old behaviors.

So how do you stop old behaviors you don't like? Management is always your first step. Do what you can to prevent your dog from practicing the bad habit. For example, keep him inside when you're not around to prevent digging in the yard, or stand on the middle of his leash to prevent him from jumping on guests.

Creating New Habits for Your Dog

Next, figure out a different action your dog can do instead -- one that is incompatible or prevents the bad habit because your pup can't do the new, nice behavior and the old, bad behavior at the same time. For example, teach your dog to sit -- and not jump on guests -- when the front door opens. When the occasion arises, he will have to make a choice. As you practice the new behavior, reward it generously with praise, toys, attention, food and a variety of other rewards so that it becomes something your dog is eager to do.

Then, when you allow your dog to make a choice between the old behavior and the new one, he will be more likely to choose the new desired behavior. If your dog chooses right, reward him generously with a jackpot reward.

Stopping Bad Behavior in Its Tracks

What do you do in the moment, when your dog jumps on your test guest? Interrupt your dog and stop the behavior while it's happening. A short, sharp low sound is great for interrupting behavior and getting the dog's attention. "No!" fits the bill nicely. So does "Eh-eh!" "Stop!" or even "Woof!"

When you interrupt your dog, you've created a behavioral vacuum, as noted dog behaviorist Jean Donaldson says, and you're going to need to fill it. Here's your opportunity to cue the new behavior and reward it. This is the true meaning of "correction": teaching the correct response. So you say, "No!" and then immediately "Sit!" and then, hopefully, "Good dog, you did it!"

If your dog doesn't respond to the command right away, make it happen. Use a lure, move your dog away from the distraction or gently guide him into position. Whatever it takes!

Saying "No": Be Clear With Your Dog

One reason trainers avoid telling people to say "No!" is that "No!" is ambiguous. It doesn't clarify what your dog is doing wrong. If you say "No!" to a dog that is jumping on your guest, your dog might think it was the friendly greeting you don't like. Your dog might think, "What, I should be barking and threatening this person?" or something else about the performance. Even if you say something like "No jump!" have you really taught your dog what "jump" means? Have you taught a "Jump!" command so he knows the contrast?

Go ahead and say "No!" when, in spite of your prevention efforts, your dog engages in annoying or dangerous action. Stop that action in the moment. Then be sure to follow up with an informative, familiar command such as "Sit," "Come" or "Leave it." "No!" by itself puts an immediate stop to the behavior -- but only a temporary one. If you don't replace the undesired behavior with another one, you have no long-term improvement.

Put the focus on the action you want rather than the action you don't want. Instead of a frustrated mantra, "No!" becomes a quick tool for interruption so you can go back to working on the behavior that you want.

Pets | Dogs: When Should You Tell Your Dog 'No'?