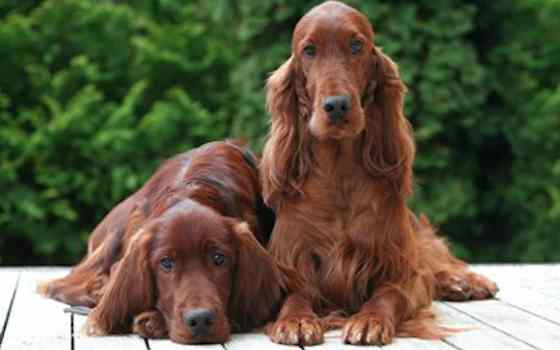 Even people who don't know much about dogs can identify an Irish Setter because of the breed's distinctive silky red coat. But most people don't know that the Irish Setter's original color was red and white. In the 19th century, the Irish bred out the white to create the all-red Setter we see today in the AKC Sporting group. The breed was originally bred to set (i.e., crouch) by hunted game. These dogs still have a very strong hunting instinct, though today's hunting Irish Setter points and flushes game without setting.

The Irish Setter is still a hunting dog, but it's also a great friend and pal for the right family. Irish Setters are large -- I've had some over 100 pounds -- so you need to be big enough to physically control them. (It typically takes an adult or an older child.) They're also very energetic and need exercise in order to be physically and mentally healthy, so make sure to provide them with plenty of off-leash romping time in a fenced yard, a dog park or another safe space. They're a lot of fun, and they're beautiful to watch as they run, jump and play.

If you're not home all day to let them stretch their legs, look into a doggie day care service. Irish Setters love to run, so if you're a hiker or walker, you'll give them sufficient exercise. (Plan on trekking at least 2-3 miles per day.) If you can't make the commitment, look for a more sedentary breed.

The rollicking, happy-go-lucky Irish Setter is a love bug. It wants to be with its people and shares a lot of the same characteristics as kids: mischievous, spirited and curious. However, because of its size and enthusiasm, it's not the best choice for small children. And because the Irish Setter is a hunting dog, introducing new pet birds or cats can cause trouble!

Irish Setters have a reputation for being hyperactive. The 1962 movie Big Red made the breed too popular. They were consequently overbred to meet the demand for puppies -- to the detriment of the breed.

Today, overbreeding is not a concern, but the Irish Setter is still an incredibly active breed by nature. I recommend a six-week basic obedience class for any energetic dog breed.

Irish Setters respond best to gentle, positive reinforcement -- nothing harsh. They need to know you're in charge. For their own safety, make sure to train them to come when called.

Well-trained Irish Setters make great therapy dogs. And many have been certified as Canine Good Citizens by the American Kennel Club (AKC), a reward for good-mannered dogs that is also the foundation for other AKC activities (like obedience and agility).