How to Play Tug-of-war With Dogs 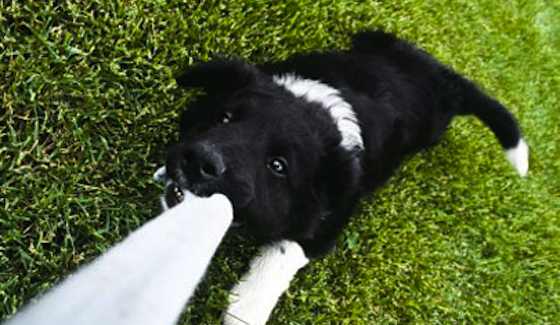 Learning to play tug-of-war can be very useful for dogs -- as long as they play by the rules. Actually, this is true of a number of games because they teach your dog impulse control, or how to maintain control even when he's excited. At the same time, the games can be used as rewards for training specific commands, like "Sit," "Down," "Come," "Drop it," "Leave it," etc. Many agility competitors, police dog trainers, search-and-rescue teams and other professional trainers use "Tug" as a high-powered reward for their dogs' work. And, of course, games are fun!

How to Start Tug-of-war With Your Dog

Here's how to play tug-of-war:

The toy should be comfortable for both you and the dog to hold. Longer toys are especially important when playing the game with excitable dogs or children.

Pick up the toy

Encourage your dog to pick it up too. Give a particular cue that the game has started, like "Let's tug!" Some dogs will refuse to do this with you, especially if they've been punished for tugging in the past. You can start small by clicking and treating them for holding one end while you hold the other. However, tugging is instinctive for dogs (it's a cooperative act in pack-mate feeding), so your dog should catch on quickly.

Tug a few times, and then tell your dog "Drop it"

If your dog does not drop it right away, you can offer to trade the toy for a food treat or another toy; gently hold the dog's collar while also holding the toy; or drop the toy and walk away. When he drops it, you can reward him with either a treat or another round of tug (preceded by "Let's tug!").

How to Teach Your Dog Self-control

I usually try to interrupt vigorous play with commands. In other words, I'll play tug for a few seconds, then stop and ask the dog to "Sit" (or some other command he knows well -- perhaps "Down"). If he responds right away, you say "Good dog!" and the game starts up again right away. If he does not respond, you can give him one more chance. But if he still fails to listen to you, you can say "Too bad!" and the fun ends. You are letting your dog prove his impulse control, and the reward for him controlling himself is that he gets to play more.

Sometimes dogs who play tug engage in play growling, reminding me of the sounds that humans make when they're pretending to play rough games. We say "I'm gonna get you" or "Pow, you're dead!" or "Here comes the monster!" But we don't really mean any harm. While our young playmates might squeal as if in alarm, they're usually not really frightened either. It's all just play. However, the growling might instead be a sign of high arousal (getting overly excited), so you may want to keep your play at a level before that. Take a break to practice "Drop it," "Sit," "Down" or some other command.

When Your Dog Takes It Too Seriously

Of course, sometimes dogs do shift from a playful mood to a serious one. Warning signs to look for include stiffening or freezing, snarling (lifting the lips to show the teeth), or any change in your dog's overall attitude. When in doubt, or if you think she's working her way from fun to serious, take a break. Ideally, you'll ask her to drop it, reward her calmly for dropping it, and then switch to a less-intense activity. Sometimes these activities help change the pace and attitude: walking into another location, putting the toy away and sitting down with the dog. Or practice some calming signals, like sniffing, yawning or stopping to touch and look at some meaningless patch of ground (sort of the human equivalent of sniffing).

Stacy Braslau-Schneck is a longtime dog trainer and a professional member of the Association of Dog Pet Trainers. She works closely with the Human Society Silicon Valley and is the owner of Stacy's Wag'N'Train, which offers small group classes and private lessons in San Jose, Calif.

Living with Kids and Dogs ... Without Losing Your Mind

Pets | Dogs: How to Play Tug-of-war With Dogs