How to Get Your Dog Surfing This Summer 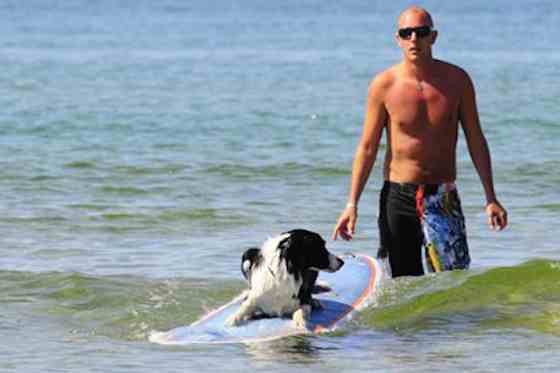 "Surfer dude" has new meaning these days, with both male and female hang-ten hounds catching waves at beaches from coast to coast. Does your dog have what it takes to surf? Our experts weigh in, sharing what you'll need to get Fido started and where you can go to see some of the most totally tubular canines.

Can Your Dog Surf?

Dogs aren't so different from humans when it comes to surfing. Some of us have that natural attraction to water and outdoor activities, while others prefer different pastimes. It likely has to do with genetics, early exposure, socialization, risk-taking habits, and other factors. The bottom line is that some dogs seem to enjoy surfing, while others run for their lives when they're near a surfboard or even water.

Rob Kuty of San Diego Pet Training helps run the Surf Clinics at the Helen Woodward Animal Center in California. Graduates can participate in the center's famous "Surf Dog Surf-A-Thon" competition, held on Sept. 9, 2012. "Only attempt surfing with dogs that really love the beach and water," says Kuty. "Dogs who fear or dislike either are almost impossible to train to surf, so you won't find those dogs at these types of competitions."

"Dogs are not successful surfing if they don't want to do it," he continues. "An owner will have a hard time getting his dog to surf just because he wants his dog to surf." If you surf and your dog is eager to accompany you to the beach, there's a good chance your pet will easily learn to ride the waves just as you do.

On the other hand, Michael Uy, owner of Abbie Girl, the most medaled dog in the surfing world and holder of the Guinness World Record for longest wave ridden by a dog, cautions that "many people are cashing in on the media tide with quick methods to get a dog on the board. But look at all the wipeout pictures and the body language to see the dogs don't enjoy it." He strongly advises that owners do not force their dogs to surf if they don't want to. "It's an extreme sport and must be treated so, for the sake of the dogs and your relationship with your dog."

Training a Dog to Surf

Uy says dogs should never be tied to the board so they cannot move forward, "which is just unthinkable." He instead supports an approach that he created called "Trust Not Training." Kuty puts emphasis on "desensitizing the dogs to the board." He explains that he helps dogs get comfortable standing on the surfboards on the sand, and reinforces that behavior with praise. "This has the positive result of making the dogs enjoy standing on the surfboards because they have been trained to understand that these boards are positive places to be," says Kuty.

After the dogs are comfortable on the boards, Kuty and his team then take their surfers-in-training out into the water. At that point, he and his team "hold the boards while letting the dogs feel the rhythm of the water and find their particular surf style." Bulldogs, for example, prefer to lie down, he says, probably due to the distribution of their weight. Other breeds prefer standing or sitting.

Equipment and Safety for Dog Surfing

A veterinarian should give your dog the OK first, says Betsy McFarland, The Humane Society of the United States' vice president for companion animals. "Dogs should not overexert themselves," she adds. Your dog should wear a canine life vest, and you should monitor your dog at all times when he or she is in the water, advises McFarland.

Southern California is the center of the dog-surfing world at the moment, with most major competitions held in this area. The Loews Coronado Bay Resort Surf Dog Competition at Imperial Beach is held in April. The Surf City Dog Surf event at Huntington Beach takes place September 28-30.

For the right dogs, surfing can "be a very good thing," says McFarland. Given some of the cool sunglasses and stylish clothing available for dogs, don't be surprised to find out the popular shades-sporting hipster attracting attention at your local beach has fur and a tail.

Pets | Dogs: How to Get Your Dog Surfing This Summer