The Poodle: More Than Just a Pretty Dog 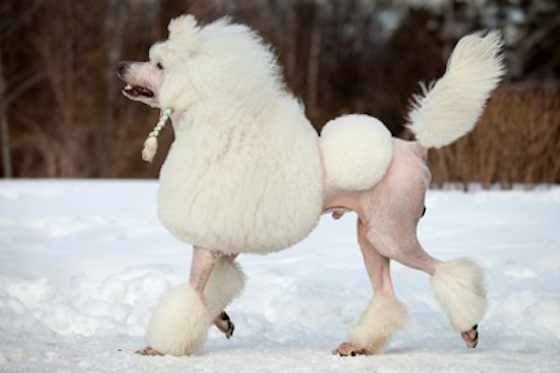 I got involved with dogs at age 7. I always admired the Standard Poodles and aspired to be like Anne Rogers Clark, who showed Poodles and was the first woman handler to win Best in Show at Westminster. It wasn't until some 40 years later that I got my first Standard Poodle, Hannah -- a 10-month-old stray -- from the local pound. Then I got another, Tucker, from a rescue shelter. Since then, I have been raising and showing my dream dog.

I think the Poodle is so popular (the American Kennel Club dubbed it the no. 8 most popular dog breed in 2011) because there are many types to suit different people's lifestyles.

You start with the Toy, which can be carried in a purse. Then there's the Standard, which really is a big dog despite the Poodle's frou-frou reputation. Between them is the Mini, which can be a pampered breed but is also a fine athlete. I chose to work with Standards because they're simply amazing. They're intuitive, attentive, loyal, athletic, loving, highly intelligent, great companions. I can go on and on. They are very people-oriented and are not fussy about living requirements. They just want to be with you. And the icing on the cake: They don't shed or have that dog smell.

Be Aware of These Poodle Health Concerns

Before you become a Poodle owner, you should educate yourself about health problems that can affect the breed. Like many other breeds, Poodles are susceptible to bloat, aka gastric torsion, which causes the stomach to twist and trap fluid and gas. Bloat is a horrifying, tragic occurrence that tends to be related to large, deep-chested dogs -- in this case, Standard Poodles. It's thought to have a genetic component; thus we can hope that a breeder would never breed a dog that has bloat.

After years of studies, we're also learning that environmental triggers may very well increase the possibility of bloat. Every owner of a Standard Poodle should learn the symptoms and signs of bloat: discomfort, distended abdomen, difficulty breathing and hypersalivation.

Poodles also are prone to Addison's disease, which is an insufficient production of adrenal hormones by the adrenal gland. Addison's disease affects many Standard Poodles, and there are several very encouraging studies taking place to find the mode of inheritance and to help breeders make fully informed choices in keeping or choosing their breeding dogs. A diagnosis of Addison's is not a death warrant and is manageable with medications.

The Poodle Health Registry shares pedigrees and health information, both good and bad, voluntarily submitted by owners. While it's still in its infancy, it is a valuable resource if you're trying to find a puppy from healthy parents, or if a breeder is looking for a mate for a dog.

There's Nothing Frou-frou About the Poodle

The Poodle is not a delicate or fancy dog. Part of that reputation might come from the Poodle look you so often see in show dogs -- an AKC-required haircut called the Continental Trim. The beautiful, curly Poodle coat can be groomed and trimmed in an endless variety of looks; it's not necessary to give your dog bouffants or sculpted pompons on their legs.

Don't be scared off by the Poodle's grooming needs. I've found most Poodles need to visit the groomer every six weeks or so. It really depends on how closely you trim your dog and what activities you'll be doing. Depending on where you live, a full groom can run from $60 to $100.

Generally speaking, Poodles are fabulous family dogs. Since they're so easily trainable, it is not difficult to teach them the proper behavior with small children and babies. Poodles are very human-oriented, gregarious and smart. They love enjoying human companionship, playing games, having a job to do and having their mind kept busy.

Poodles are not hyper dogs by nature, but they tend to not do well if they're left to their own devices. I personally prefer to place my puppies only in homes that have a full-time parent or a plan for the puppy during any work time (which has to be minimal), such as a play group or doggie day care. Puppies learn from their parents and then their humans. If no one is there to guide and teach them, they will do what puppies do: chew, bark, act out, have anxieties, etc.

Of course, every dog is different, and some adapt well to being left on their own for long periods. But with a Standard Poodle, it's like having a racy Corvette and then only driving it to the grocery store. Why wouldn't you want to coach the most out of what you have in front of you?

Pets | Dogs: The Poodle: More Than Just a Pretty Dog