Does Food Taste Different to Cats and Dogs? 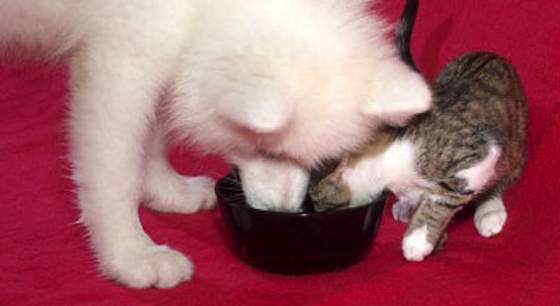 Though cats and dogs are the most common household pets in North America, the similarities practically end there. Their needs and preferences for food, water and socialization are quite distinct. Below, Illinois-based cat- and dog-nutrition expert Linda Case and Dr. Trisha Joyce of New York City Veterinary Specialists reveal some key differences.

As cats and dogs were becoming domesticated, they developed according to the food sources available to them. "The evolutionary history of the dog suggests a predilection for a diet that is more omnivorous in nature, while the history of the cat indicates that this species has consumed a purely carnivorous diet throughout its evolutionary development," explains Case.

Cats evolved into meat-eaters that need a whole lot of protein (about 26 percent of their total caloric intake), but dogs can subsist on a more varied diet (only about 5 percent protein). Joyce says dogs can eat many different foods, but cats would have serious nutritional deficits because they require protein from meat.

Their taste buds differ as well. While both dogs and cats have a high proportion of taste buds that are sensitive to amino acid flavors (or proteins), only dogs respond to sweet foods. This means, for one, that you don't have to hide that pan of brownies from your cat. "You have to be careful to keep a dog away from chocolate," says Joyce. "It's dangerous for them. Cats can't metabolize it either, but the concern is not the same because they would never eat the massive quantities of it that a dog would."

Both dogs and cats become accustomed to eating at specific times, but only dogs seem influenced by the social setting of the meal. "Dogs tend to increase food intake when consuming food in the presence of other dogs in their social group," says Case. "This process is called social facilitation." For most dogs, social facilitation causes a moderate increase in interest concerning food, as well as a tendency to eat faster.

Dogs are so prone to the influence of others that even their owners can impact their food choices. In one study summarized by Case, a group of dogs had the choice between a small and a large portion of kibble. Most chose the large. But when their owners were brought in and the dogs watched as they chose the smaller plate, their own choice changed in the second trial, as they chose the tiny serving. A similar experiment used equal portions in two different bowls. Each dog was consistently more interested in whichever bowl its owner preferred.

Joyce adds that cats seem to be emotional eaters. "My clients often tell me that their cats go to the food bowl when they're happy, like when the owner arrives home."

While both dogs and cats need an adequate supply of clean water, the definition of "adequate" differs between the two. "Dogs typically consume more water per unit body weight than cats do, and respond more rapidly to mild dehydration by voluntarily increasing their water consumption," says Case.

Cats' relatively weak thirst drive is attributed to their evolution from a desert-dwelling species. As a result of low water consumption, cats produce more concentrated urine than dogs, which helps to conserve the little water they do take in. However, it also leaves them at greater risk for bladder stones, rock-like deposits that can interfere with their ability to urinate, causing symptoms like blood in the urine and passing urine outside of the litter box.

One Meal a Day vs. Many

"Cats are natural grazers," says Joyce, noting that it's more common for cats to be on free-feed diets than dogs. The reason for this may be partly a function of anatomy. While the stomach of each animal acts as a reservoir for the body, allowing food to be ingested as a meal rather than continuously throughout the day, a dog's stomach expands more readily. "The proximal section of the stomach is capable of expansion, a function that is assumed to be of greater importance for dogs, which tend to eat large meals at a given time," says Case.

Keeping the above differences in mind, pet owners can rest assured that they are adhering to what nature intended -- and continues to insist on.

Pets | Does Food Taste Different to Cats and Dogs?