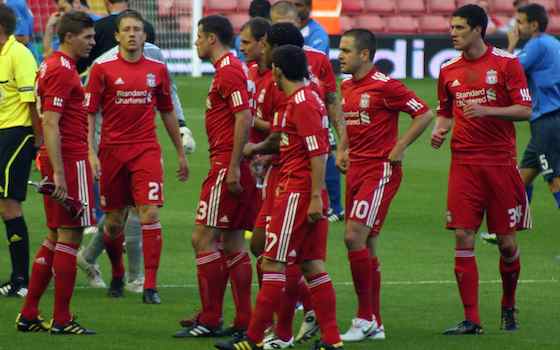 Luis Suarez scored his 29th goal of the season as Liverpool took over the Premier League top spot after after brushing aside Tottenham Hotspur, 4-0, at Anfield.

With his performance, Suarez surpassed Robbie Fowler's club record of 28 set during the 1995-96 season.

Philippe Coutinho and Jordan Henderson completed the scoring in the second half while Younes Kaboul put Liverpool early with an own goal in the 2nd minute.

The win earned Liverpool an eighth straight league victory and sent them two points clear of Chelsea at the summit, while Tottenham remain sixth, four points behind Everton.

"The dream is for our supporters, they want to win the title - but it is not in my thinking. My thinking it is to prepare the team and perform well and if we do that we can continue to win games and then we can see where that takes it," Liverpool manager Brendan Rodgers said.

Liverpool got off to a flying start, taking the lead through Kaboul's own goal in the second minute.

Johnson sent in a low cross from the right and, after a slight deflection off Vertonghen, the Frenchman got his feet in a tangle and diverted the ball into the net from inside the six-yard box.

The visitors suffered a further setback midway through the half when they lost Vertonghen through injury, and his replacement Dawson's mistake led to Liverpool's second.

In trying to lay the ball off to Kaboul, Dawson's pass allowed Suarez to get the better of the center-half before racing clear and finishing across Lloris into the bottom right-hand corner for a 2-0 lead.

In the 55th minute, Coutinho gave Liverpool a 3-0 lead after firing past Hugo Lloris from 25 yards out before Henderson wrapped up scoring in the 75th minute as Liverpool moved a step closer to a first league title since 1990.

Meanwhile, Everton boosted its top-four hopes with a 3-1 triumph over Fulham at Craven Cottage.