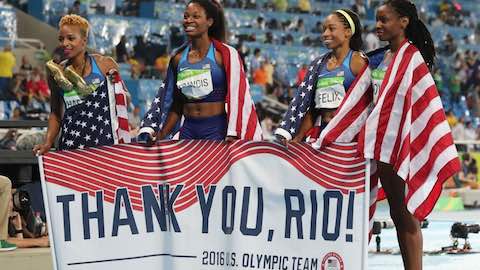 The Rio 2016 Olympic Games drew to a close following 17 days of competition between more than 11,300 athletes representing 205 nations. The Rio Games, which marked the first Olympics to be held in South America – saw Team USA top the medal chart in every category for only the seventh time in Olympic history and the first since 1948, leading all nations with 121 medals, including 46 golds, 37 silvers and 38 bronzes.

The United States is one of only five nations to have accomplished the feat at the Olympic Games in summer competition and the first to do in 40 years.

The winning campaign extended Team USA’s reign atop the overall medal chart to six straight Games, dating back to 1996.

Overall, 213 American athletes contributed to the medal count, including 32 multiple medalists and 13 who won multiple gold medals. Of the 27 sports in which U.S. athletes competed, the U.S. brought home hardware in 20. 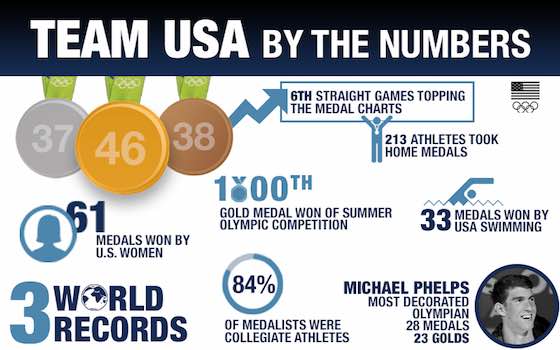 “I don’t think there’s anything better than having the opportunity to hang gold medals on American athletes and listen to the Star-Spangled Banner,” said USOC Chairman Larry Probst. “Overall, these have been a terrific Games – the venues have been spectacular and the volunteers were very friendly and did a fantastic job.”

For the second straight Olympics, China finished second with 70 medals (26 golds), ahead of Great Britain, which completed the Games with 67 medals (27 golds) to rank third among all nations. Team USA’s 51-medal margin of victory is the second largest at a non-boycotted Olympics, ranking second behind its previous high of 61 in 1924.

“This has been an incredible Games for Team USA by any measure, and I’m so proud and amazed by the spectacular performances of our athletes, the quality our coaching and the way our organization came together to support them,” said Alan Ashley, USOC chief of sport performance and Team USA chef de mission. “There have been so many first-time performances by so many athletes in different sports and our hats go off to the Rio 2016 Organizing Committee for creating an environment in which our athletes could thrive and reach their potential.”

Team USA collected the most medals in swimming and track and field, combining for 65 podium finishes across the two sports – the most since 1972 and tied for fourth-best of all time.

U.S. swimmers topped all nations in both the overall (33) and gold-medal (16) charts – marking the team’s greatest medal haul since 2000. Winning five of the six relays, the U.S. garnered nearly half of the 34 gold medals up for grabs, while no other country won more than three.

Making his fifth – and what he says is his last – Olympic appearance, Michael Phelps further cemented his legacy as the greatest Olympian of all time with 23 gold medals and 28 overall. With five golds and one silver, the 2016 Games marked the fourth straight in which Phelps led all multi-medalists across all nations and sports dating back to 2004. Sharing the spotlight in the pool was teenage phenom Katie Ledecky, who set two world records en route to winning four golds and one silver and became only the second swimmer to sweep the 200-, 400- and 800-meter freestyle titles at a single Games.

American athletes also impressed in track and field, winning 32 medals and 13 golds, highlighted by the first-ever U.S. podium sweep in the women’s 100-meter hurdles from Brianna Rollins, Nia Ali and Kristi Castlin. Taking their place in history, Allyson Felix took home three medals to become the all-time winningest woman in Olympic track and field with six golds and nine overall, while Ashton Eaton tied an Olympic record to become the first U.S. decathlete to repeat as Olympic champion since Bob Mathias (1948 and 1952).

The U.S. women’s gymnastics team was equally spectacular, winning nine medals and surpassing the team’s previous high of eight from the 2008 Games in Beijing and 1984 Games in Los Angeles. Propelled by four medals from individual all-around champion Simone Biles, the nine medals are the most won by any nation since 1972 (Soviet Union, 10). Widely considered the best gymnast of her generation, Biles became the first American gymnast to win four golds at a single Games, helping Team USA medal in every event for the first time since 1984.

“This experience has been the dream of a lifetime for me and my team, and I consider it a privilege to represent my country, the United States Olympic Committee and USA Gymnastics,” said Biles, who was selected by her peers to lead the U.S. delegation into the Closing Ceremony. “My first Olympic experience just keeps getting better and I want to thank Brazil for hosting an incredible Games.”

Multi-medalists Biles, Felix and Ledecky were among a strong contingent of American women, who for the second straight Olympics, set a record with 61 medals, exceeding its previous high of 58 from London in 2012. Had American women competed as their own country, they would have ranked fourth among all nations in the overall medal chart and tied for second in the gold-medal count with 27. Highlighting the list of firsts by American women, Gwen Jorgensen and Helen Maroulis gave the U.S its first gold medals in triathlon and women’s wrestling, while Kim Rhode (shooting) became the first woman from any nation to win a medal at six straight Olympic Games. Kayla Harrison (judo) and Claressa Shields (boxing) became the first Americans in their respective sports to successfully defend their Olympic titles, while Kerri Walsh Jennings (beach volleyball) and Venus Williams (tennis) became the most decorated Olympic female athletes in their sport with four and five medals apiece.

“Title IX paved the way and created so many opportunities for women in sport,” said Felix. “I feel so proud and so inspired by the strong women on our team. It’s such an amazing group to be a part of and I think about all the images of successful women reaching young girls back at home – those are the things that last. These performances will inspire future Olympians, and I am just so humbled and honored to be a part of these amazing women.”

Of the 213 Americans who earned medals in Rio, nearly 85 percent competed in NCAA collegiate athletics, with the majority of those coming in swimming, track and field, and team sports. Overall, the U.S. collected 28 medals in team events, including three golds (basketball and water polo) and two bronzes (indoor volleyball) in traditional team sports. Highlighting the list of team accomplishments, the U.S. women’s eight extended its gold-medal reign to 11 straight Olympic and world championship titles, winning its third straight Olympic gold medal in Rio. The U.S. also continued its winning traditions in basketball and water polo. Led by tournament MVP Maggie Steffens, the U.S. women’s water polo team became the first to successfully defend its Olympic title and the only nation to medal at each of the five Olympic Games since the sport debuted in 2000. A day later, the U.S. women’s basketball team extended its Olympic women’s record to six straight Olympics titles and eight overall.

With the U.S. men’s basketball team winning its third consecutive gold medal – and 15th overall – on the final day of competition, the Rio Games also marked the first time Team USA won both the first and last gold medal at a summer edition of the Olympics. Shooter Ginny Thrasher helped the U.S. to a strong start on day one, setting an Olympic record to claim the first gold medal awarded in Rio.