Michael Phelps: The Greatest Olympian Ever 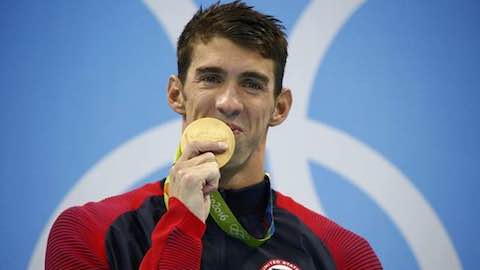 Michael Phelps: The Greatest Olympian Ever

Michael Phelps -- the most decorated Olympian of all time -- ended his career after his fifth Olympic Games, in Rio, after winning five gold medals and a silver, taking his tally to 23 Olympic titles and 28 medals. A record unlikely to be beaten any time soon.

Michael Phelps made his Olympic debut at the 2000 games in Sydney as a 15-year-old. He reached the finals of the 200-meter butterfly, but finished fifth -- one of only two times that Phelps failed to medal in the Olympics.

At the 2004 Athens Olympics, Phelps took the swimming world by storm winning six gold medals. He took individual gold in the 100 and 200-meter butterflys, the 200 and 400-meter individual medleys, while earning bronze in the 200-meter freestyle. His also earned gold in the 4×200 freestyle relay and 4×100 medley relay and added a bronze in the 4×100 freestyle relay. Phelps set three individual Olympic records and one world record.

At the 2016 Rio Olympics, Phelps focused on his best events. At 31 years old, Phelps medaled in all six of his races -- three individual races and three relays -- earning five golds and one silver. If he truly retired, Phelps finishes his Olympic career with an all-time best 28 medals. In 18 individual events, he earned 16 medals, 13 of which were gold. Phelps broke an Olympic 2,168 year-old record. Leonidas of Rhodes had held the record for most individual Olympic wins since 152 BCE with 12.

Olympians with Most Summer Gold Medals