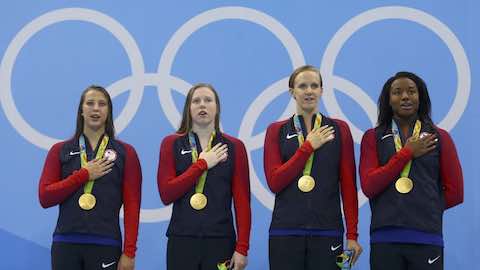 “One thousand gold medals is a remarkable achievement made possible by the culture of sport that is the fabric and foundation of Team USA,” said USOC CEO Scott Blackmun. “It is a testament first and foremost to our athletes, but it also reveals the impact of the support provided by our National Governing Bodies, our sponsors and donors, and American fans. This is an accomplishment we celebrate together.”

Several USOC sponsors will generously donate gifts to the swimmers in recognition of the milestone. The gifts will have a theme of 1,000 to highlight the longevity of Team USA's success.

Team USA entered the Rio Olympics with 977 gold medals in summer competition, and the relay team’s podium-topping performance marked the 23rd of the Games for the Americans. The U.S. Summer Olympic team left Rio with 1,022 Gold medals

The former Soviet Union is second on the all-time list with 395 gold medals, while Great Britain is second among active countries with 245.