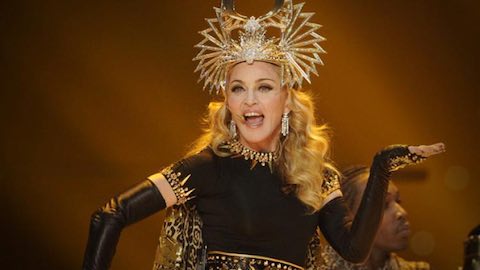 Madonna promised that her Super Bowl halftime show would not feature any wardrobe malfunctions.

The singer delivered on that promise, but the 11-minute show was not without controversy.

During the live performance with Madonna and Nicki Minaj, rapper M.I.A. flashed her finger at the cameras for a brief, but not unnoticed, moment.

Twitter went a-twitter after viewers caught the "royal salute." NBC and the NFL have since apologized.

NBC spokesman Christopher McCloskey said, "The NFL hired the talent and produced the halftime show. Our system was late to obscure the inappropriate gesture and we apologize to our viewers."

NFL spokesman Brian McCarthy said, "The obscene gesture in the performance was completely inappropriate, very disappointing, and we apologize to our fans."

It was the first significant controversy during a Super Bowl halftime act since the 2004 performance at Super Bowl XXXVIII, which starred Justin Timberlake and Janet Jackson and the now infamous "wardrobe malfunction." In the years that followed, the NFL went with more traditional acts and there were no surprises.

M.I.A. is a British singer, songwriter and rapper. The Grammy-nominated star cites guerrilla art and fashion among her influences. She has been called a muse among fashion designers such as Donatella Versace.

M.I.A. landed on Vogue's 10 Best Dressed List of 2008. That same year, she turned down her inclusion in People's 50 Most Beautiful People in the World.

Madonna's performance during the halftime show has received mixed reviews, but most critics have applauded the Material Girl's show.