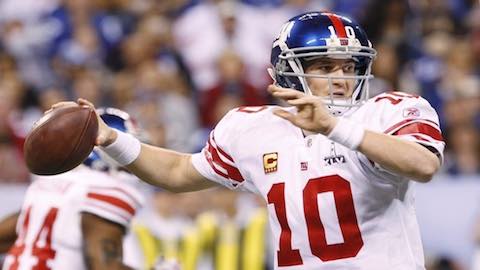 Eli Manning told the media he considered himself one of the league's elite quarterbacks, he went out and proved it in Super Bowl XLVI.

Eli Manning told the media he considered himself one of the league's elite quarterbacks, he went out and proved it Sunday night.

Manning got the better of Tom Brady in a Super Bowl for the second time and earned his second Super Bowl MVP award in the process. He led the Giants on a nine-play, 88-yard scoring drive to take a 21-17 lead with 57 seconds to play and give the Giants their second Super Bowl victory over the Patriots in five seasons.

Manning completed 30 of 40 passes for 296 yards and a touchdown. Perhaps his biggest throw of the game came on that final drive, when he dropped in a pass to Mario Manningham for a 38-yard gain to midfield.

"These are the situations you like to be in," Manning said. "I'm just happy. I'm very fortunate and very blessed."

New England led 10-9 at the half and took a 17-9 lead early in the third quarter when Brady hit tight end Aaron Hernandez for a 12-yard TD.

Manning then led the Giants to two scoring drives in the third, both of which resulted in field goals by Lawrence Tynes to cut the lead to 17-15.

The win and MVP award puts Manning in elite company. He is one of only five players in NFL history with multiple Super Bowl MVP awards, joining Brady, Terry Bradshaw, Bart Starr and Joe Montana, who is the only player with three.

Manning also won the game in Indianapolis where his brother Peyton has won four regular-season MVP awards and one Super Bowl title.

"It just feels good to win a Super Bowl. Doesn't matter where you are," said Manning. 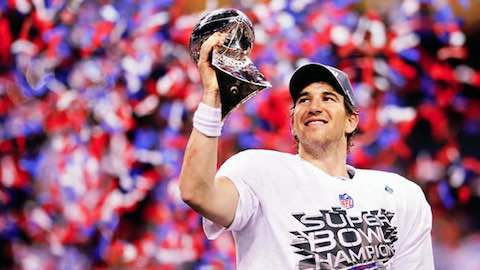 Eli Manning on the win

"It just feels great. It was a great game with two great teams. We played to the very end. It was just a great effort on both sides. There were some big plays being made."

"I'm excited to win a championship. I'm excited for my teammates. There are a number of guys, this is their first one. There are some other ones who are getting their second and more, but I'm just excited for them. I'm excited for Coach (Tom Coughlin, all of the coaches and the Giants organization. This isn't about one person. This is about a team coming together, getting this win. I'm just proud of our guys, proud of the team and how we fought all year. (We never got discouraged, kept their faith and kept their confidence and just fought to the very end."

Eli Manning on the game

"It's just tough. It's tough out there on both sides. Offensively, we did well, but it was tough getting in the endzone, tough to score touchdowns. It's great toughness and great faith by our guys just believing; and some big-time plays by a number of guys. We spread the ball around, taking what they gave us. (We got the ball out quickly and a number of guys played big-time today."

"They were in cover-2. Usually that is not your match-up. They had us covered pretty well to the right. I looked that way. I saw I had the safety cheated in a little bit and threw it down the sideline. Great catch by him (Mario Manningham), keeping both feet in. That's a huge play in the game right there; when you're backed up, to get a 40-yard gain and get to the middle of the field. That way we can pace ourselves a little bit, run the ball a little bit. It was a big, big, big-time play right there."

"We've had a bunch of them this year. We've had some 4th quarter comebacks. The whole second half -- right before halftime, New England drives down and gets a touchdown, first possession of the second half, they drive and get a touchdown. That could've sucked the momentum right out of us, but we responded, we went back. We drove down there, got a field goal, again, got another field goal, got a turnover by our guys. We were very close. We obviously had some penalties that cost us -- some very close third-downs. They did a good job of knocking the ball out, but offensively, I thought we played very well. We played smart; there at the end when we had an opportunity in the fourth quarter, we'd been in those situations and we knew that we had no more time left. We had to go down and score and guys stepped up and made great plays."

"It's tough. It is tough. I knew there wasn't that much time. With New England, they're never out of it. Tom Brady is a tremendous quarterback. He did a great job of converting on a fourth-and-16. All of a sudden they throw one in the endzone; it's up there. That's nerve racking. We've completed a hail mary this year. I was hoping another one wouldn't be completed tonight for them. Great job by our defense, stepping up, getting a sack and doing some great things."

Eli Manning on the fan support

"All the New York Giants fans, thank you. Thank you for your support all year long. Thank you to the people that came to Indianapolis, we appreciate that. We had a great crowd tonight. They were loud. The majority were Giants fans, it seemed like tonight. We have the greatest fans in the world. They will be celebrating for us back in New York and we'll be celebrating on Tuesday with them."

"You know, you try to have it where nothing changes. You know the circumstances. You say, ‘Hey we've got to score a touchdown right here.' We knew a field goal would work also. Obviously, we had a great first play, hitting Mario (Manningham) for 40 yards almost. That changes the field position. All of a sudden now, you are getting close to scoring range. A couple of other big plays: Mario on a curl route; Hakeem (Nicks) on a slant, and some other nice plays by those guys getting us into a scoring situation."

"I think you have to try to be. That's important."

Eli Manning on the story being him having two Super Bowl MVPs; both against Tom Brady

"I don't think that's the story. I think the story is the New York Giants are World Champions. That's what I'm proud of. That's all that matters. The only important thing is for this organization -- the Giants, these guys that are on this team, the coaches -- (to have) an opportunity to say ‘We are the World Champions.' That's the story."

"Well, Bear (Pascoe) obviously did a great job. We were doing a lot of two tight end stuff. That took that away, but we kind of went to three receivers some, and a fullback and a tailback to throw it and run the ball. They were giving us some different looks, but we can adjust. I think that's the great thing about this offense. We are flexible. Some of those formations we haven't practiced all week, but we get right to it and guys know what they are doing. That's the advantage of having a veteran group of guys who have been here, and they understand this offense and they can play well."

"How brilliant can Easy-Eli be? And he will never again have to answer questions, 'Do you consider yourself and elite quarterback and in Tom Brady's class?'" Rodney Harrison on Eli Manning: "We knew this game was going to come down to the fourth quarter, and everyone thought I was crazy a week ago when I said I trust Eli Manning more in the fourth quarter than I did Tom Brady. I think you saw tonight why I said that. Tom Brady had a couple opportunities, missed some opportunities down the field. Eli didn't. He won this football game."

"I was in New York with the Giants last week and every defensive player told me how much confidence they had in Eli Manning. Justin Tuck said, 'We know if we can just get that stop in the fourth quarter Eli will win it for us.' And he proved them right tonight."