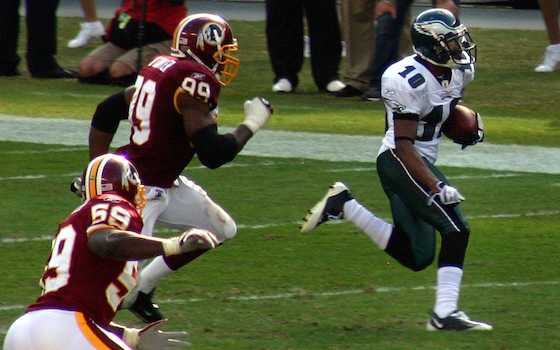 The Philadelphia Eagles have released wide receiver DeSean Jackson, after the team uncovered information about his off-field connection and activities, according to sources.

A source said the Eagles decided to release Jackson rather than trade him to another team that might be unaware of the information about his activities.

"After careful consideration over this offseason, the Philadelphia Eagles have decided to part ways with DeSean Jackson. The team informed him of his release today," the Eagles said in a statement.

Earlier, a report by NJ.com said the Eagles had become increasingly concerned about Jackson's off-the-field activities and his reputed ties to Los Angeles street gang members.

Another source said the Eagles decided to release Jackson for a number of reasons due mostly to "work ethic and attitude."

The Eagles learned about Jackson's associations in Los Angeles and that report "raised their level of concern," the source said.

Coach Chip Kelly, general manager Howie Roseman and owner Jeffrey Lurie discussed the situation with the club's lawyers over the past 24 hours and decided the best course of action would be to release Jackson.

After his release, the 27-year-old Jackson issued a statement that both thanked the Eagles for initially giving him a chance and denounced "misleading and unfounded" reports.

"First I would like to thank the Eagles organization, the Eagles fans and the city of Philadelphia for my time in Philly," Jackson said. "I would also like to thank [former] coach Andy Reid for bringing me in.

"Secondly, I would like to address the misleading and unfounded reports that my release has anything to do with any affiliation that has been speculated surrounding the company I keep off of the field," he added.

"I would like to make it very clear that I am not and never have been part of any gang. I am not a gang member, and to speculate and assume that I am involved in such activity off the field is reckless and irresponsible," the wideout said.

Jackson was due to make $10.5 million in 2014 and was owed $30.5 million over the remainder of his contract, but none of that money was guaranteed.

At least six teams already have reached out to Jackson's agent, according to a league source. One that may be interested is the Carolina Panthers, who need a wide receiver after releasing Steve Smith earlier this month.