The Islamic Scramble for Jerusalem 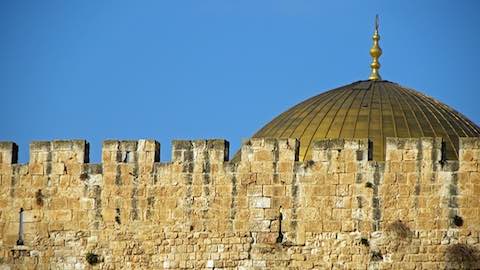 The Islamic Scramble for Jerusalem

We're dealing with narratives, concepts and emotions that no logical arguments or facts can change or influence when it comes to Jerusalem.

Three recent articles in The Strategist about President Donald Trump's Jerusalem declaration -- by Peter Rodgers, Mike Scrafton and Richard Haass -- demonstrate that we're dealing with narratives, concepts and emotions that no logical arguments or facts can change or influence. Being a retired Israeli diplomat and a resident of Jerusalem, I believe that any attempt from my side to add more will be to no avail. However, I was stationed in three interesting cities which may offer some perspective and ideas.

My first posting abroad was at the Israeli embassy in The Hague, the Netherlands. The Hague isn't the capital of the Netherlands; Amsterdam, just a 45-minute drive northeast of there, is. I don't know why or who decided that it should be as it is. Nor can I recall that anyone was bothered by that situation.

It also happens that I lived in New Delhi and discovered that the city of Chandigarh is the joint capital of two important Indian states, Punjab and Haryana. And it works. And finally, I was stationed for more than nine years in Amman and have some insights into the crucial importance of Jerusalem to the Hashemite Kingdom of Jordan.

The Hashemite dynasty descends from the Prophet Muhammad, the founder of Islam. This lineage provides respectability and authority to Jordan's king in the eyes of both Jordanians and Muslim believers living abroad. The crown's stability is frequently attributed to this heritage. Accordingly, Jordan's special role in the Muslim holy places in the city is recognised in the peace agreement with Israel: 'Israel respects the present special role of the Hashemite Kingdom of Jordan in Muslim Holy shrines in Jerusalem.' The Hashemite Kingdom of Jordan contributes to maintaining these shrines and pays the salaries of officials and staff.

Jordan is very sensitive to current developments and is seriously looking for ways to tackle them. But it faces many other contenders in the Arab and Islamic world who also claim a role in Jerusalem, each for their own ends and motives. The Palestinian Authority, for example, has designated Jerusalem the capital of the future Palestinian state and is working hard to take the lead. That puts the Palestinian Authority, consciously or unconsciously, in competition, and eventually on a collision course, with Jordan about which country will have the special role in Jerusalem's holy shrines.

But there's another Arab Muslim state whose king also hails from the Prophet Muhammad's family: the Kingdom of Morocco, headed by King Muhammad VI. The king, like his father before him, chairs the Al-Quds Committee (Jerusalem Committee) of the Organisation of Islamic Cooperation (OIC), which is an umbrella for 57 Islamic states. The committee promotes Muslim claims to Jerusalem.

Turkey is another strong player in the arena. In recent years it has sought openly and systematically to restore the heyday of the Ottoman Empire. It remembers very well its 400 years of custodianship of Jerusalem (1517--1917). Last month, it hosted an emergency meeting of the OIC to discuss President Trump's declaration. But Jerusalem is only one facet of the broader Turkish effort. The recent visit of President Recep Tayyip Erdoğan to Sudan yielded an interesting result: a long-term contract to restore an old Sudanese port on the shores of the Red Sea. The port was used during the Ottoman period to transfer Muslim pilgrims from Africa to the holy shrines in Mecca and Medina. The contract facilitates, among other things, the presence of Turkish navy vessels in the port, which has caused discomfort to Arab countries in the neighbourhood.

And in the flanks, casting a long shadow, looms the Islamic Republic of Iran with its Quds Force, a special operations unit of the Revolutionary Guard Corps dedicated to the liberation of Jerusalem, which adds a Shia dimension to the already complex competition. Needless to say, the force was established long before the current American president was sworn in.

As one can see, the picture is much more complex than meets the eye. Ignoring all these factors won't contribute to a realistic assessment or solution.

The multiple actors competing between themselves may resort at some stage to more populist steps, such as allowing 'volunteers' to march in the direction of Jerusalem or calling for jihad. That shouldn't surprise anyone; only 100 years ago, during World War I, British propaganda depicted the Palestine campaign as 'the last crusade'. The stage is wide open to miscalculations and eventually to unintended consequences.

Jacob Rosen-Koenigsbuch served as Israel's ambassador in Jordan from 2006 to 2009. He is currently an independent consultant on demographic mapping and collects books about Lawrence of Arabia. Image courtesy of Pixabay user heathertruett.

"The Islamic Scramble for Jerusalem"