Trump's Jerusalem Rationale and Its Consequences 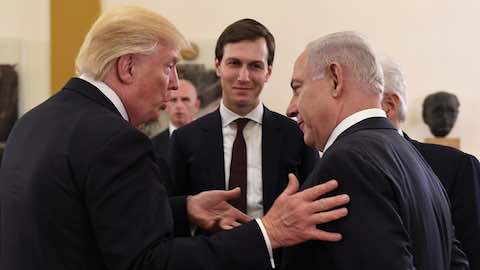 By Richard N. Haass (The Strategist)

Trump's attempt to change US policy while arguing that little had changed did not persuade many. Most Israelis were pleased with the new US stance, and most in the Arab world and beyond were incensed.

It is 50 years since the Six-Day War -- the June 1967 conflict that, as much as any other event, continues to define the Israeli--Palestinian impasse. After the fighting was over, Israel controlled all of the West Bank, Gaza and Jerusalem, in addition to the Sinai Peninsula and the Golan Heights.

Back then, the world saw this military outcome as temporary.

United Nations Security Council Resolution 242, the backdrop to what was to become a diplomatic solution to the problem of the stateless Palestinians, was adopted some five months after the war ended. But, as is often the case, what began as temporary has lasted.

This is the context in which President Donald Trump recently declared that the United States recognised Jerusalem to be Israel's capital. Trump stated that the US was not taking a position on the final status of Jerusalem, including 'the specific boundaries of the Israeli sovereignty' there. He made clear that the US would support a two-state solution if agreed to by both sides. And he chose not to begin actually moving the US embassy from Tel Aviv, even though he could have simply relabelled what is now the US consulate in Jerusalem.

The attempt to change US policy while arguing that little had changed did not persuade many. Most Israelis were pleased with the new US stance, and most in the Arab world and beyond were incensed.

Just why Trump chose this moment to make this gesture is a matter of conjecture. The president suggested it was simply recognition of reality and that his predecessors' policy failure to do so had failed to yield any diplomatic benefits. This is true, although the reason diplomacy failed over the decades had nothing to do with US policy towards Jerusalem, and everything to do with divisions among Israelis and Palestinians and the gaps between the two sides.

Others have attributed the US announcement to American domestic politics, a conclusion supported by the unilateral US statement's failure to demand anything of Israel (for example, to restrain settlement construction) or offer anything to the Palestinians (say, supporting their claim to Jerusalem). Although the decision has led to some violence, it looks more like an opportunity lost than a crisis created.

What made this statement not just controversial but potentially counterproductive is that the Trump administration has spent a good part of its first year putting together a plan to resolve the Israeli--Palestinian conflict. This announcement could well weaken that plan's already limited prospects.

What the Trump administration seems to have in mind is to give outsiders, and Saudi Arabia in particular, a central role in peacemaking. Informing this approach is the view that Saudi Arabia and other Arab governments are more concerned with the perceived threat from Iran than with anything to do with Israel. As a result, it is assumed that they are prepared to put aside their long-standing hostility towards Israel, a country that largely shares their view of Iran.

Progress on the Israeli--Palestinian issue would create a political context in the Arab world that would allow them to do just this. The hope in the Trump administration is that the Saudis will use their financial resources to persuade the Palestinians to agree to make peace with Israel on terms Israel will accept.

The problem is that the only plan to which this Israeli government is likely to agree will offer the Palestinians far less than they have historically demanded. If so, the Palestinian leaders themselves may well determine it is safer to say no than to sign on to a plan sure to disappoint many of their own people and leave them vulnerable to Hamas and other radical groups.

The Saudis, too, may be reluctant to be associated with a plan that many will deem a sellout. The top priority for the new Saudi leadership under Crown Prince Mohammed bin Salman is to consolidate power, which the prince is doing by associating himself with an effort to attack corruption in the kingdom and by pursuing a nationalist, anti-Iranian foreign policy.

But neither tactic is going entirely according to plan. The anti-corruption effort, while so far popular, risks being tarnished by selective prosecution of offenders (which suggests that it is more about power than reform) and reports about the crown prince's own lifestyle. And the anti-Iran efforts have become inseparable from what has become an unpopular war in Yemen and diplomatic embarrassments in Lebanon and Qatar. Meanwhile, ambitious plans to reform the country are proving easier to design than to implement, and are sure to alienate more conservative elements.

The problem for Trump and Jared Kushner, his son-in-law who leads US policy in this area, is that the Saudis are likely to prove much less of a diplomatic partner than the White House had counted on. If the new crown prince is worried about his domestic political standing, he will be reluctant to stand shoulder to shoulder with an American president seen as too close to an Israel that is unwilling to satisfy even minimal Palestinian requirements for statehood.

All of which brings us back to Jerusalem. Trump argued that recognising the city as Israel's capital was 'a long overdue step to advance the peace process and the work towards a lasting agreement'. More and more it appears that Trump's move will have just the opposite effect.

Richard N. Haass is president of the Council on Foreign Relations and the author of A World in Disarray: American Foreign Policy and the Crisis of the Old Order

. This article is presented in partnership with Project Syndicate. Image courtesy of Flickr user Israel Ministry of Foreign Affairs.