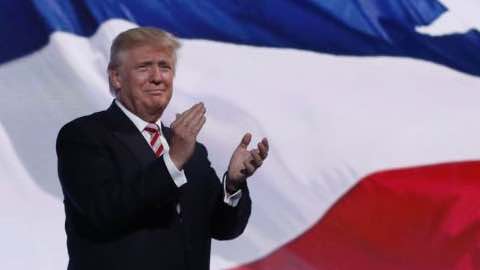 After Donald Trump's dismal fundraising totals from May, the Republican Party's presidential nominee turned it around in June, collecting $26,721,706. That is by far his largest one-month haul of the campaign.

Following dismal fundraising totals in May for Donald Trump's campaign, the Republican Party's presidential nominee turned it around in June, collecting $26,721,706. That is by far his largest one-month haul of the campaign.

The latest data from the Federal Election Commission and the Sunlight Foundation, released July 20, also reveals the Trump campaign spent just $7.8 million. That provides a crucial boost to the campaign's cash-on-hand figure, which now stands at about $20.2 million. For perspective, in May, Trump had just shy of $1.3 million in the bank.

It's yet another example of Trump's uncanny ability to defy expectations this election cycle.

Trump has dodged an array of darts that would have poisoned most other political campaigns, from a rocky relationship with the GOP establishment, to a loud and proud pack of conservatives who are so anti-Trump they've popularized the #NeverTrump hashtag on social media, to a near constant stream of articles anticipating Trump's downfall. Plus, his campaign staff remains incredibly lean and he has spent comparatively little on advertising. According to data collected by Graphiq politics site InsideGov, as of the end of May, Trump has spent about a third of what his Democratic rival, Hillary Clinton, has spent on ads.

Yet Trump continues to find success with American voters.

Whether that continues into the general election, of course, remains to be seen. The Republican National Convention, typically an event focused on party unity, has revealed a fissured GOP still working through what it means to have Trump at the top of its ticket. On Monday afternoon, the convention floor broke out in chaos as anti-Trump people mounted one last protest. And on Wednesday evening, Sen. Ted Cruz delivered his prime-time speech without endorsing Trump, a controversial and almost unheard of move that got the Texan booed off the stage.

The 2016 contest makes a hard pivot to the general election next week, when Democrats convene in Philadelphia for their convention. Although that primary had its fair share of bumps, it wasn't nearly as rancorous as the Republican fight. After weeks of back-and-forth between the campaigns, Vermont Sen. Bernie Sanders finally endorsed Clinton in mid-July.

Other hold-outs in the Democratic Party have thrown their support behind Clinton since she solidified the nomination in early June. Indeed, she just clocked her third-best fundraising month of her presidential campaign, bringing in $36,355,965.

The Clinton campaign spent heavily, too, doling out close to $34.5 million in June. But after months of solid fundraising, Clinton still has an enviable stockpile, with about $44 million cash on hand.

Both Clinton and Trump have more cash on hand now than at any other point during their respective campaigns. It positions each of them well in the kickoff to what promises to be a combative general election.

The next round of fundraising reports come out August 20, and will show how much money candidates raised in July. That data -- along with polls and prediction markets, of course -- will indicate the impact the conventions have had on the race.