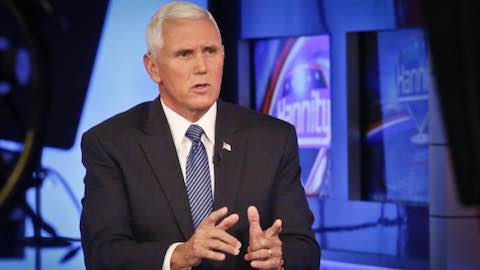 Your covered with a Mike Pence cheat sheet, highlighting key facts and figures that have defined Mike Pence's career.

Mike Pence is ready for his close-up. Donald Trump picked the Indiana governor for the number-two spot on the Republican presidential ticket, meaning Pence is fast becoming a household name. His national profile will only increase with Wednesday evening's prime-time address to the Republican National Convention in Cleveland.

An Indiana native, Pence represented his home state in the U.S. House of Representatives for six terms. In 2012, Pence left Capitol Hill for Indianapolis, when his fellow Hoosiers voted him in as the state's 50th governor. It might end up being his only term as the state's top dog: Pence ended his 2016 re-election campaign in order to run for VP, meaning he is putting all of his chips on the success of the Trump-Pence ticket.

What else do you need to know about the potential next vice president of the United States? Graphiq politics site InsideGov has you covered with a Mike Pence cheat sheet, highlighting key facts and figures that have defined his career.

Host with the Most

Before entering public service, Pence hosted a weekday radio program as well as a morning television show. "The Mike Pence Show" was syndicated on 18 radio stations in Indiana, and ran from 1994 to 2000. (At the time, Pence called himself "Rush Limbaugh on decaf." He's often described himself as conservative but "not angry about it.")

In 1995, Pence added TV host to his résumé. His politics show ran on Sunday mornings in the Indianapolis area.

In 2016, the gay rights movement has been ignited by a spat of so-called bathroom bills that aim to codify which restroom transgender people can use. In 2015, Indiana's Religious Freedom Restoration Act had a similar effect.

The bill argued the government "may not substantially burden a person's exercise of religion." Supporters said it protected businesses and individuals from doing things against their religion; opponents said it allowed discrimination of the lesbian, gay, bisexual and transgender community.

Pence signed the bill in March 2016, and the fallout was almost immediate. Tech companies and businesses criticized the measure, and Angie's List said it wouldn't go through with a $40 million expansion of its headquarters in the state.

Although Pence defended the law, a few days later, he signed another bill clarifying that the original legislation did not permit discrimination. When he signed the second bill, Pence stated: "Over the past week this law has become a subject of great misunderstanding and controversy across our state and nation. ... Last weekend I called upon the Indiana General Assembly to clarify that this new judicial standard would not create a license to discriminate or to deny services to any individual as its critics have alleged. I am grateful for the efforts of legislators, business and other community leaders who came together to forge this clarifying language in the law."

The move quieted the controversy in Indiana, but look for this issue to pop up again during the general election.

According to data from OnTheIssues, Pence clocks in as the most conservative governor in the United States. He shares the spot with Gov. Butch Otter, a Republican out of Idaho.

While in the House, Pence supported the war in Iraq -- first in 2003 for the initial invasion and then in 2007 for the troop surge. These votes reflect his in-general support for a muscular foreign policy and a large military.

That's a significantly different perspective than that of Trump, who has repeatedly come out against the Iraq invasion. But if you're expecting that to trip up Trump-Pence unity, you've got another thing coming. When asked what he thought of his running mate's stance on Iraq, Trump simply said, "I don't care."

According to a recent New York Times article, throughout his career in politics, Pence has benefited from his connections with deep-pocketed conservative donors Charles and David Koch. The Koch brothers have said they will likely stay out of the presidential race, and instead focus their monetary might on Senate and House races.

Even if the Kochs don't get involved in the top-of-the-ticket contest, Pence's relationships with that larger network of donors could prove helpful to the campaign. Trump's fundraising efforts have been spotty at best. The latest campaign finance data reveals Trump has brought in about $64.5 million and spent a little over $63 million.

The next round of campaign finance data, which covers financials from June, will be made public July 20. But keep your eyes peeled for the data that gets released in August, since that will cover fundraising totals from July -- and could reveal the impact Pence has on the ticket.