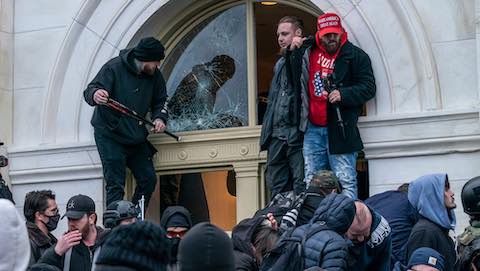 One year after the January 6 insurrection, is the United States on the verge of break-up?

When does a country stop being a country?

This critical moment takes place before a civil war breaks out or an official ceremony of dissolution is held. At some point, the citizens of the country stop thinking of themselves as members of a common association. At some point, the mystic chords of memory transmogrify into mutual disgust and incomprehension.

At that moment, the us is over.

For Yugoslavia, that moment came sometime in the late 1980s when the ubiquitous phrase "brotherhood and unity" – bratstvo i jedinstvo – no longer held sway among the majority. Nationalist populists were coming to the fore in Serbia, Croatia, Bosnia, and other republics. Economic gaps between those republics were growing untenable. Cultural practices increasingly diverged, and buried resentments resurfaced.

Actual civil war would come later, in 1991. But before Yugoslavia ceased to exist on paper, before it was extinguished on the battlefield, it disappeared from people's hearts.

Here in the United States, we've not yet reached another Fort Sumter moment. But perhaps we're at the Harpers Ferry stage with the January 6 insurrection serving the same function as John Brown's thwarted raid on a federal arsenal in 1859.

Brown's raid came 18 months before the start of the Civil War. We are now observing the one-year anniversary of the January 6 insurrection.

Is there no longer an us in the U.S.?

This country is no stranger to deep divisions, which culminated in the Civil War and have persisted ever since: North-South, urban-rural, Black-white, rich-poor, coasts versus heartland, liberal against conservative. In the 2000s, these divisions crystallized into Red vs. Blue, which was more than just predominantly Republican states squaring off against largely Democratic ones. Political polarization was coming to resemble nothing less than the Blue vs. Grey standoff that tore the country apart 150 years earlier. Barack Obama's appeal to a Purple America seems impossibly quaint in light of what has happened since.

Indeed, what had once been a matter of partisan competition has become something a great deal more serious. It is no longer simply a question of disagreements over what proportion of the federal budget should go into which pot or who should be empowered to make those decisions. It isn't a matter of governing ideology or judicial philosophy.

The current debate is not actually a debate. The two sides don't even share a common political language or understanding of recent events.

The defeat of Donald Trump in 2020 was supposed to put an end to America's official foray into delusional politics at the national level. The quashing of the January 6 insurrection – and the brief, near-unanimous revulsion among members of Trump's party for that violence – provided some hope that the fever dream of an illiberal takeover had passed.

The last year has demonstrated quite the opposite. Trumpism, which started out as a simple-minded rejection of the liberal status quo, has become something else: a thorough rejection of democratic procedures and a darkly conspiratorial hatred of federal power. This corrosive ideology is now orthodoxy within the Republican Party, and that party remains popular enough – and ruthless enough – to win back control of Congress this year and, potentially, the White House in 2024.

Those who adhere to Trumpism have recast the insurrectionists as heroes – "patriots who love their country," in the words of Virginia State Senator Amanda Chase – and are determined to block all efforts to determine who was ultimately responsible for what happened that day.

Consider the recent congressional debate over the investigation into the events of January 6 and whether Trump's former chief of staff Mark Meadows should be charged with criminal contempt for refusing to showing up to testify. Once a member of Congress, Meadows is now flouting the institution's authority.

But that act of disrespect pales in comparison with the support Meadows' refusal has generated among congressional members of Trump's party. When the issue came up for congressional debate, Trump's lapdogs talked about immigration, Hunter Biden, mask mandates, in short everything but Meadows' contempt of Congress.

"When the Republican members did address the matter at hand," Amy Davidson Sorkin writes in The New Yorker, "it was in startlingly vitriolic terms."

Representative Mary Miller, of Illinois, said that the committee's work is "evil and un-­American." Yvette Herrell, of New Mexico, said that it is setting the country "on its way to tyranny." Jordan called the committee an expression of the Democrats' "lust for power." And, inevitably, Marjorie Taylor Greene, of Georgia, said that its proceedings prove that "communists" are in charge of the House. It's tempting to dismiss such rhetoric as overblown, but Congress has become an ever more uneasy place. Last week, Steny Hoyer, the House Majority Leader, sent the Capitol Police Board a letter asking for clarification on the rules about where representatives can carry weapons in the Capitol.

Evil, tyranny, lust for power, communists: that's just the kind of language that prompted a pro-Trump rally on January 6 to become a mob intent on upending an election and re-installing a president determined to rule until the end of days. Nor is the rhetoric marginal within the Republican Party. In the vote on the House floor to charge Meadows, only two Republicans supported the measure: Adam Kinzinger of Illinois, who will be retiring after this session, and Liz Cheney, who has practically been drummed out of the party for her stand against Trump.

Republican lawmakers take these positions because they can safely count on the support of their constituents (those that haven't fled the party already because of Trump). According to recent polling, nearly 70 percent of Trump voters think that Biden was not legitimately elected president in 2020. Worse, 40 percent of Republicans believe that violence against the government can be justified. It's no surprise that, in 2021, DC authorities recorded nearly 10,000 threats made against members of Congress and the Capitol itself, the highest number to date.

A war of this nature requires a very clear drawing of lines. That has taken place in Congress, with the Republicans united in their opposition to anything Biden proposes. The divisions are even starker at the state level where the defiance of the administration goes well beyond the procedural.

The most egregious example of state pushback has been around the Biden administration's attempts to boost vaccination rates against COVID-19. Republican-led states have banned vaccine mandates in defiance of Washington. Oklahoma Governor Kevin Stitt even went so far as to fire the four-star commander of his state's National Guard who supported the Pentagon's vaccine mandate and replace him with a one-star lackey who shares the governor's spirit of resistance.

By mid-December, 19 states had pushed through 34 laws restricting access to voting, setting up a confrontation with a federal establishment committed to ensuring free and fair elections.

Texas has led the way in criminalizing abortion, passing a bill that deputizes individuals to enforce the law by filing civil suits against abortion providers. More than 20 states have prepared legislation to ban abortion as soon as the Supreme Court overturns Roe v. Wade, which the Trump-packed Court seems increasingly likely to do next summer.

The residents of Florida and Massachusetts speak the same language, use the same currency, and salute the same flag. On practically everything else, from gun control and environmental standards to immigration and schooling, they could already be living in different countries.

Let's be clear: the refusal to accept federal authority doesn't come only from one side. During the Trump years, California rejected a number of federal policies, most notably on environmental issues. Liberal constituencies also defied Trump's deportation orders, efforts to undermine Obamacare, and attempts to reopen the economy even as the pandemic continued to rage. At that time, plenty of liberals – myself included – agreed that a hitherto political confrontation had become a stark stand-off between good and evil.

It's hard to imagine any presidential candidate taking office in 2024 and healing this rift. As long as the two parties continue to aspire to take control of the federal bureaucracy – and, more to the point, federal resources – one side won't kick over the game board and walk away from the match. The problem arises when a major party, like the Republicans, develops such a disgust for federal authority that it decides not to play the game any longer.

Too Little, Too Late

In 1990, the Yugoslav government legalized opposition parties. It authorized democratic elections at the republic level. New efforts were underway to liberalize the federal government. Here was an opportunity to reinvent the country, to infuse bratstvo i jedinstvo with a new participatory energy. Membership in the European Union beckoned, as long as the country could get its act together. Previous Yugoslav governments kept the country from spinning apart through sheer force. In this hypothetical democratic future, the citizens would voluntarily cleave together.

Instead, the citizens voted to cleave apart. Those democratic elections at the republic level produced governments in Croatia and Slovenia committed to seceding from the country. Democracy ended up being a brief prelude to civil war and the end of Yugoslavia. Some of the successor states would join the EU, while others are still waiting in line 30 years later.

You can blame the short-sighted decision to hold democratic elections at a republic level before the federal level. Or you could argue that Yugoslavia fell victim to much larger forces that were irresistibly centrifugal.

The current polarization of political attitudes in the United States can also be seen as a reflection of much deeper demographic and cultural shifts in this country. Whites are increasingly anxious about their loss of dominant status as the white population dropped for the first time ever in the 2020 census. Religious conservatives decry creeping secularization as church membership dropped below 50 percent in 2020 for the first time ever. Poverty remains endemic in rural America, with extreme poverty counties existing only in the countryside, while Blue states have only gotten wealthier over the years.

The Democratic strategy has been to try resolve this last issue of economic inequality through targeted stimulus spending. The party is also fighting to promote voter access in the hopes that greater turnout boosts its electoral chances. If the Democrats can appeal to enough voters on economic grounds, they can win just enough elections before demographic and cultural changes shift the ground permanently in their favor. This is the promised land, the equivalent of EU membership for Yugoslavia: a liberal future for the United States with a strong social safety net.

But that's what Republicans want to stop at all costs. That's what makes the next few years so critical for the United States. Yugoslav liberals thought that their reforms would keep the country together, that the promise of a European future would be sufficient for Yugoslav voters to keep thinking of themselves as Yugoslavs. Instead, these voters opted for independence, greater polarization, and war. Yugoslavia had already died in their hearts.

The same can be said about all those who broke into the Capitol on January 6, who have threatened lawmakers over the last year, and who embrace the multiple "big lies" of Trumpism. Of course, they think of themselves as Americans. They even say that they love America.

Energized by all their MAGA mania, however, they may end up hugging America to death.