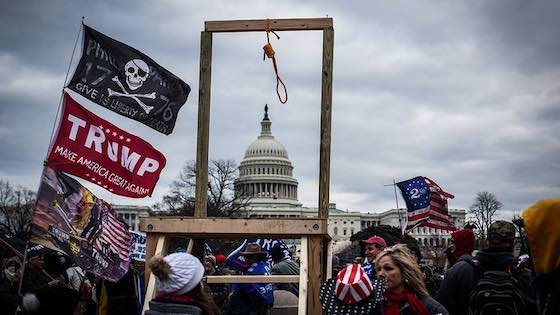 Far-right extremists are attempting to incite an insurrection to hasten the downfall of what they see as a deeply corrupt U.S. government. Some could resort to deadly acts of terrorism.

Among the many memorable images captured by photographers on January 6, 2021, is the photograph of a scaffold with a noose erected on the mall in front of the U.S. Capitol Building. The scene evoked the infamous "Day of the Rope" recounted in The Turner Diaries, the dystopian 1978 white supremacist novel – when corrupt, self-serving, liberal politicians are made to account for their misdeeds. The 2021 true-life version revealed the dangerous, continued resonance of the so-called accelerationist strategy that the novel advocates.

Accelerationism and Its Apostles

Accelerationism holds that the modern, Western democratic state is so mired in corruption and ineptitude that true patriots should instigate a violent insurrection to hasten its destruction to allow a new, white-dominated order to emerge. Indeed, some of the foremost exponents of accelerationism today were at the U.S. Capitol on January 6. They included: the Oath Keepers, whose grab-bag ideology states that "paranoid anti-federalism envision[s] a restoration of ‘self-government' and ‘natural rights';" QAnon adherents, who remain convinced that the 2020 presidential election was stolen and that former President Donald Trump was thwarted from saving the world from a Satan-worshipping pedophilia ring run by Democrats, Jews, and other agents of the deep state; and, of course, Trump's own die-hard "Stop the Steal" minions, who, against all reason and legal proof, seek to restore the former president to office.

The Violent Road to Revolution

The objective of accelerationism is to foment divisiveness and polarization that will induce the collapse of the existing order and spark a second civil war. For example, this was the strategy embraced by Seth Aaron Pendley, a January 6 protester turned would-be terrorist. The twenty-eight-year-old Texan was arrested last spring and sentenced to ten years in prison for plotting to blow up an Amazon data center in Virginia with the erroneous belief that doing so would "kill off about 70 percent of the internet" and disrupt digital communications of the FBI, CIA, and other federal agencies. Pendley thought this act of destruction would "provoke a reaction" [PDF] from the ruling "oligarchy" that would thereby convince the American people to take up arms against the "dictatorship."

Pendley's path from being a disgruntled conspiracy theorist to a would-be bomber is yet another red flag signaling today's toxic and increasingly volatile political climate. A recent Washington Post-University of Maryland poll found that just over one-third of people surveyed believe that, in certain dire circumstances, violence against the U.S. government would be justified. It's reportedly the largest portion to respond this way in various surveys that have asked this question over more than twenty years.

Assessing the Threat Ahead

The threat of far-right terrorism remains high heading into 2022 and could even grow in the lead-up to the 2024 presidential primaries and election. Disaffected individuals and armed extremist groups will likely continue to see terrorism as a means to incite a revolution and ensure that the deep state doesn't "steal" another election.

That Americans today cannot even agree on what occurred a year ago when rioters stormed the U.S. Capitol underscores the existence of a parallel universe fostered and sustained by these competing narratives. It is one where falsehood is accepted as fact and the threat of renewed violence lurks menacingly in the background.

This clash of competing realities, exacerbated by partisanship and amplified on social media, will continue to undermine government efforts to counter the domestic terrorism threat. The atmosphere today is ominously reminiscent of the period leading up to the 1995 Oklahoma City bombing – the deadliest domestic terrorist attack in U.S. history. Then, extreme right-wing rhetoric was calling on so-called patriots such as Timothy McVeigh to defend their fellow Americans against a predatory federal government. Today, there are many more McVeighs out there, men like Pendley. Sadly, it might require another horrific tragedy like the Oklahoma City bombing before the U.S. government takes decisive action against this threat.