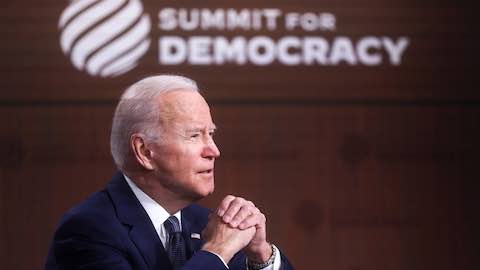 After Trump's four years of abandoning and undermining the legacy of U.S. commitment to democracy, President Biden is seeking to steer the country -- and the world -- down a different course.

Eighteen months before he was sworn in as the forty-sixth U.S. president, and well before an insurrectionist mob stormed the U.S. Capitol, U.S. presidential candidate Joe Biden pledged to restore the United States' battered domestic political institutions and once more put "democracy back on the global agenda." To advance this goal, Biden promised to host a "summit for democracy" during his first year in office. That event, held virtually on December 9 and 10, attracted a blizzard of commentary, most of it deprecatory, and some of it premature. The coming year will determine whether anything enduring emerges from the Biden administration's initiative.

Biden's intentions in hosting the summit – one of his earliest and most concrete foreign policy proposals – were well-meaning. The retreat of global freedom, documented by Freedom House, the Economist Intelligence Unit, and the International Institute of Democracy and Electoral Assistance, is well into its second decade, and the United States has not been unscathed. The decline of democracy accelerated during the presidency of Donald Trump, who downgraded its advancement abroad and undermined its practice at home. Although U.S. democracy promotion has always been selective, Trump took U.S. cynicism to new heights, lionizing foreign autocrats while weakening the informal normative guardrails that are the ultimate bulwark against domestic despotism. Biden hoped his summit would begin to "renew the spirit and shared purpose of…the free world" and "honestly confront" democratic backsliding, including in the United States, by focusing on three pillars: defending democracy from authoritarianism, fighting corruption, and promoting respect for human rights.

The summit's critics – and they were legion – were unimpressed. Realist scholar Steven Walt dismissed the event as an imprudent distraction from concrete national interests, particularly those requiring cooperation with authoritarian powers. Others disparaged the White House for hubris and hypocrisy, underscoring the utter absence of U.S. moral standing to lead on this issue. Still others criticized the guest list for being both too expansive and not inclusive enough. It is unclear by what criteria manifestly "not free" countries like Angola and Iraq made the cut while "partly free" Singapore and Sri Lanka were rebuffed. Strategic considerations inevitably played some role: India and Poland, important counterweights against China and Russia respectively, were included despite their dubious democratic credentials. Yet the same strategic logic was not applied to NATO allies Hungary and Turkey.

Notwithstanding these concerns, the summit's symbolic value should not be discounted. In holding the event, the United States and its democratic allies shifted the global conversation from lamenting the fragile state of freedom to asking what countries with shared values could actually do, individually and collectively, to turn the tide against pernicious internal and external autocratic influences. The framing of the gathering – a summit for democracy – reflected Biden's thesis that the contest between democracy and authoritarianism "will define our future" – requiring the world's free, open societies nations to stand by one another in this moment of peril.

If putting autocracies on the defensive is a desired metric, the gathering succeeded. The indignant Chinese and Russian responses to the summit suggested that its symbolism had indeed struck a chord. The two countries' ambassadors to the United States jointly decried it as the "product of [U.S.] Cold War mentality." Beijing was especially apoplectic, critiquing the multiple shortcomings of U.S. politics and extolling its own political system, absurdly, as a "democracy that works." Both China and Russia, of course, have been working "assiduously to drive a wedge between the United States and its allies" and create their own collaborative networks of like-minded repressive partners. Biden's summit signaled that, going forward, democracies do not plan to take this lying down.

Among the most common critiques was that the summit would divide the world into two camps, democratic and authoritarian, complicating cooperation on shared challenges. On closer examination, this charge loses some of its potency. To begin with, the world is already divided, a reality that cannot solely, or even primarily, be blamed on the United States and its allies. It is the product of a conscious effort by Beijing, Moscow, and other authoritarian governments to promote an alternative world order to the open, rule-bound international system the West has championed, by and large, since 1945. Second, neither the Chinese nor the Russians are letting their objective need to cooperate with the United States on global issues like nuclear proliferation inhibit their international campaigns of repression. As such, it is unclear why the United States and company should unilaterally disarm rather than push back.

Having held their summit, the Biden administration and its partners now move into the significantly more challenging part of their democratic endeavor: the "year of action." Participants were encouraged, though not required, to make new commitments aligned with the summit's three pillars and "report back" on progress at a second summit in 2022. The United States, for its part, announced the Presidential Initiative for Democratic Renewal, intended to support democratic reformers abroad. The European Union launched a 1.5-billion-euro Global Europe Human Rights and Democracy program to promote human rights, fundamental freedoms, democracy, and the rule of law through 2027.

Success is hardly assured. The summit provided scant details on how the parties would monitor and measure delivery on such commitments, or whether different yardsticks would be used to assess progress based on varying levels of democratic strain. Senior officials blithely expressed hope that "civil society" would help hold governments accountable for their promises, though a far better approach would be for participating governments to submit themselves to a system of ongoing peer review.

Beyond holding one another accountable, the Biden administration and its democratic partners should refine how they characterize and assess democracy's merits. Too often, Biden defends democracy in instrumental terms, as a political system that can "‘deliver' prosperity and security in a way that autocracies cannot." This framing mistakenly suggests that democracy is important only to the degree that it provides material benefits. Autocracies often invoke the same logic to justify their regimes and repudiate democracies that fail to record similar progress. China, for instance, frequently hails its success "in creating prosperity and stability" for its population while Western democracies contend with rife social unrest, political discord, and racial divisions. Instead of playing into China's hands, open societies should, as Jan-Werner Müller argues, "make the case for democracy [on] its fundamentals."

For all the accusations of hubris, the Biden administration approached the summit "from a place of humility," acknowledging that the United States does not have all the answers. It would be wise to stick to this line. The biggest obstacle to realizing the president's vision of a global democratic revival, and to U.S. credibility on this agenda, is the divisiveness of U.S. domestic politics. The toxic levels of partisanship in Washington testify how thoroughly the Republican Party has abandoned the defense of democracy as a cornerstone of U.S. foreign policy. More than sixty percent of Republican rank-and-file believe that Trump actually won the 2020 presidential election, and Republican state legislatures are working overtime to disenfranchise Democratic-leaning citizens through gerrymandering and voter identification laws. Given the parlous state of its own polity, the United States is in no position to assume the role of "bouncer" at a democratic club, throwing out those nations whose credentials it finds suspect.

The arrival of a new year is often a time when people take a hard look at themselves and resolve to do better. For the Biden administration, it also offers an opportunity to ask what the United States can do, in the coming "year of action," to better protect and promote its own democratic experiment, to affirm the intrinsic values of democracy, and to restore the nation's legacy as a beacon for others. At midnight on January 1, the United States should save a toast for democracy – and then "get to work."