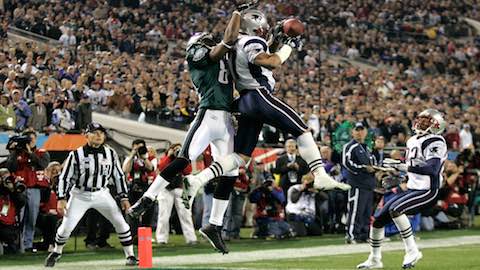 The Eagles threatened first, driving to the Patriots' 8 late in the first quarter. On first down, Mike Vrabel sacked Donovan McNabb for a 16-yard loss and, after a penalty overturned an interception, Rodney Harrison stepped in front of a pass for an interception at the Patriots' 4.

Early in the second quarter the Eagles drove 81 yards, keyed by Todd Pinkston's 40-yard catch, and capped by McNabb's 6-yard touchdown pass to L.J. Smith on third-and-goal for a 7-0 lead.

The Patriots responded by driving to the Eagles' 4, but Tom Brady fumbled on a fake handoff attempt and Darwin Walker recovered. Later in the quarter, a 29-yard punt by Dirk Johnson allowed the Patriots to drive just 37 yards, keyed by Branch's 7-yard catch on third-and-3, and capped by Brady's pass to David Givens on the right side of the end zone to tie the game with 1:10 left in the half.

New England began the second half with a 9-play, 69-yard drive, including four receptions, two on third down, by Branch, and capped by Vrabel's 2-yard catch.

The Eagles put together a 10-play, 74-yard drive later in the third quarter, keyed by Brian Westbrook's 4-yard catch on third-and-3, and followed on the next play by his 10-yard touchdown catch to tie the game.

The Patriots' defense forced a three-and-out, and Branch's 19-yard catch set up Adam Vinatieri's 22-yard field goal with 8:40 to play. Tedy Bruschi intercepted McNabb's pass at the Patriots' 24 with 7:20 remaining.

The Eagles forced a punt, and beginning at their own 21 with 5:40 to play, needed 13 plays to drive 79 yards, capped by McNabb's 30-yard touchdown pass on a post-pattern to Greg Lewis with 1:48 to play.

Eagles quarterback Donovan McNabb completed 30 out of 51 passes for 357 yards and 3 touchdowns, but threw 3 interceptions and was sacked four times. Westbrook was the Eagles' leading rusher with 44 yards, while also catching 6 passes for 70 yards and a touchdown and returning 3 punts for 19 yards. Pinkston caught 4 passes for 82 yards, while Owens was the Eagles' top receiver with 9 catches for 122 yards, however neither of them scored a touchdown.

Tom Brady completed 23 out of 33 passes for 236 yards and 2 touchdowns. Dillon was the top rusher of the game with 75 yards and a touchdown, and had 3 catches for 31 yards. Branch's Super Bowl record 11 catches tied Cincinnati Bengals' Dan Ross in Super Bowl XVI and San Francisco 49ers' Jerry Rice in Super Bowl XXIII. Branch's 21 catches in Super Bowls XXIX and XXXIX are the most in back-to-back Super Bowls. Running back Kevin Faulk contributed 38 rushing yards and 27 receiving yards. 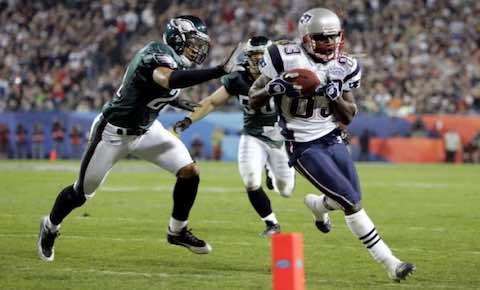 As the New England Patriots prepared for Super Bowl XXXIX, one of its most explosive, if lesser-known, players shrugged off a moment that later proved prophetic.

New England won its third Super Bowl in four seasons, and Deion Branch was named the game's Most Valuable Player.

Branch's future fortune was the prophecy of a New England assistant coach.

"One of my coaches asked me about this MVP stuff," Branch said, pausing as the full weight of the psychic moment rushed over him. "I'm just so happy."

Another clutch performance by Tom Brady appeared worthy of a third MVP award for the quarterback, but voters may have been swayed by the weight of history. Branch led all receivers with 11 receptions for 133 yards. His 11th catch in the third quarter tied him with Jerry Rice and Dan Ross for the most receptions in a single Super Bowl. It also gave him a combined 21 receptions in two Super Bowls, setting another record.

If Branch's impact on the game's outcome surprised anyone, they must not have been watching last year's Super Bowl when Branch recorded 10 catches for 143 yards and a touchdown in the Patriots' win over Carolina.

While a nagging injury reduced Branch's production to just 35 receptions for 454 yards and four touchdowns during the 2004 season, he re-established himself in the postseason. Branch entered Super Bowl XXXIX as the Patriots' most productive and dangerous receiver, having scored a touchdown in both of the team's postseason games. He continued his postseason streak by dominating a game-turning drive for the Patriots.

With the game tied 7-7 at halftime, the shaky Patriots used Branch to get over the hump. Brady opened the drive with a quick 8-yard completion to Branch, and then found him open for 27 yards near midfield. Three plays later, Brady found Branch sitting inside the zone for a 15-yard gain into Philadelphia territory. On the drive's eighth play, the Patriots picked up an Eagles blitz, allowing time enough for Branch to haul in a Brady pass for 21 yards down to the Eagles 2. Branch's third conversion of a first down on the drive set up Mike Vrabel's 2-yard touchdown pass on the next play and a 14-7 Patriots lead. In all, Brady looked to Branch on five plays of the nine-play drive, completing four of those passes for 71 yards. The drive gave the Patriots their first lead of the game and a glimpse of how they might solve the Eagles secondary in the second half.

Despite racking up more than half of his total yards on four plays, Branch shrugged off his prominence in the drive and New England's turn for the better.

"We picked it up," Branch said. "We went inside and regrouped, and figured out what we were doing wrong and had to capitalize on a lot of things."

The job of giving Branch his due fell to quarterback Brady.

"Deion make some big plays tonight," Brady said. "We figured out a way to get him the ball to begin the second half and he made the plays. I'm really happy for him."

After standing amidst the confetti of a postgame celebration, having Terry Bradshaw hand him the keys to a new Cadillac, and standing beneath the hot lights of the interview room, Branch still couldn't talk his way past the Patriots' unselfish and successful habit of playing within themselves and their roles.

"Our plan was to just come here and win the game," Branch said. "It doesn't make a difference who gets what." 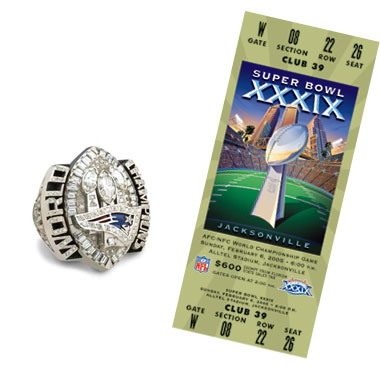