The Dallas Cowboys joined the San Francisco 49ers at the time as the only teams to win five Super Bowls, mostly due to the stellar play of cornerback Larry Brown, who intercepted two passes in the second half of Dallas's 27-17 victory over the Pittsburgh Steelers.

Cornerback Larry Brown's two interceptions led to 14 second-half points and helped lift the Cowboys to their third Super Bowl victory in the last four seasons and their record-tying fifth title overall. Brown's interceptions foiled the comeback efforts of the Steelers, and earned him the Pete Rozelle Trophy as the game's most valuable player.

Dallas scored on each of its first three possessions, taking a 13-0 lead on Troy Aikman's 3-yard touchdown pass to Jay Novacek and a pair of field goals by Chris Boniol. Neil O'Donnell's 6-yard touchdown pass to Yancey Thigpen 13 seconds before halftime pulled Pittsburgh within 6 points, and the Steelers had the ball near midfield midway through the third quarter. But O'Donnell's third-down pass was intercepted by Brown at the Cowboys' 38-yard line, and his 44-yard return carried to Pittsburgh's 18.

After Aikman's 17-yard completion to Michael Irvin, Emmitt Smith ran one yard for the touchdown that put Dallas ahead again by 13 points. The Steelers rallied, though, behind Norm Johnson's 46-yard field goal, a successful surprise onside kick, and Byron (Bam) Morris's 1-yard touchdown run with 6:36 to play in the game.

And when they forced a punt and took possession at their own 32-yard line trailing only 20-17 with 4:15 remaining, it appeared they might have a chance to break the NFC's recent domination in the Super Bowl. But on second down, Brown struck again, intercepting O'Donnell's pass at the 39 and returning it 33 yards to the six.

Two plays later, Smith barreled over from four yards out for the clinching touchdown with 3:43 to go. Pittsburgh limited the Cowboys' powerful running game to only 56 yards and enjoyed a whopping 201-61 advantage in total yards in the second half, but could not overcome the three interceptions (another came on the game's final play) thrown by O'Donnell, the NFL's career leader for fewest interceptions per pass attempt.

The Cowboys' victory was the twelfth in a row for NFC teams over AFC teams in the Super Bowl. 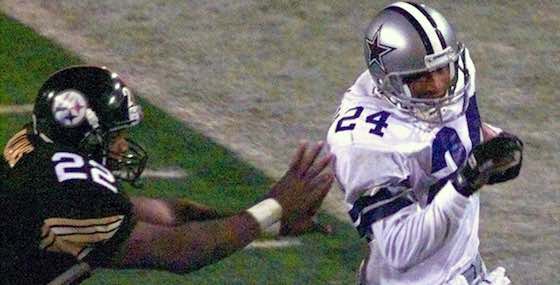 Both interceptions came in the second half -- which the Cowboys converted into touchdowns and stymied viable Pittsburgh drives -- setting up short rushing touchdowns by Emmitt Smith. Brown's opportunistic interceptions helped Dallas overcome a 13-7 deficit as well as preserve a 20-17 advantage in this eventual Cowboys 27-17 victory over the Steelers. 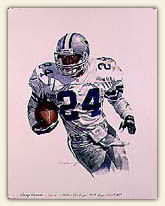 Trailing 13-7 midway through the third quarter, Pittsburgh had moved the ball close to midfield.

On third down, Steelers quarterback Neil O'Donnell was intercepted by Brown at the Cowboys' 38-yard line. Brown returned the pick 44 yards to Pittsburgh's 18, which led to a rushing touchdown by Cowboys running back Emmitt Smith.

Brown's second interception prevented a Steelers comeback. The Steelers scored 10 consecutive points to make the score 20-17 and had the ball on their own 32-yard line with 4:15 remaining. On second down, Brown again intercepted an O'Donnell pass and returned it 33 yards to Pittsburgh's 6. Moments later, Smith later scored on a 4-yard touchdown run to seal the victory. 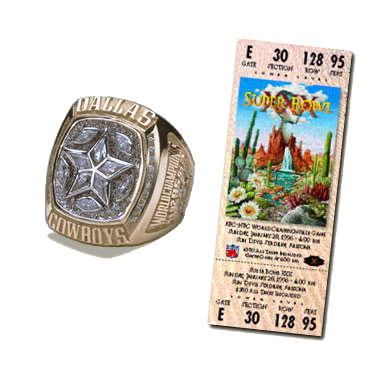 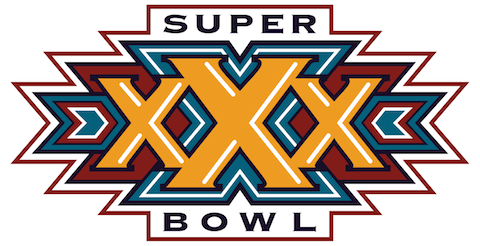