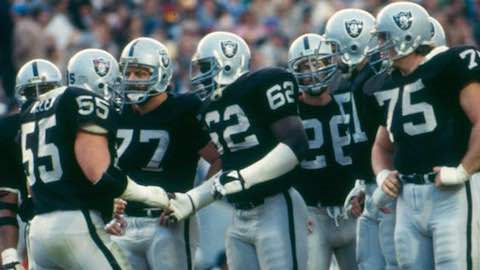 Shattering John Riggins' record for rushing yards established the previous year, Allen spun and juked his way to 191 yards rushing in Oakland's 38-9 victory over the Redskins. The agile Allen, who averaged nearly 10.0 yards per rush in this game, scored both of his touchdowns in the third quarter, sealing the victory.

The Raiders were the underdogs as they had been in their two previous Super Bowl wins. The Redskins were the highest scoring team in National Football history and had beaten the Raiders in Washington earlier in the season, 37-35, in the 1983 season's most exciting game.

To get into Super Bowl XVIII, the Redskins demolished the Rams, 51-10, then held off the 49ers 24-21 to win the NFC Championship. The Raiders advanced to Super Bowl XLVIII with a convincing 38-10 victory over the Pittsburgh Steelers, and then defeated the Seattle Seahawks in the AFC Championship Game, 30-14.

The Raiders took a 7-0 lead 4:52 into the game when Derrick Jensen blocked Jeff Hayes's punt and recovered it in the end zone for a touchdown. With 9:14 remaining in the first half, Raiders quarterback Jim Plunkett (Super Bowl XV MVP) fired a 12-yard touchdown pass to wide receiver Cliff Branch to complete a three-play, 65-yard drive.

Washington cut the Raiders' lead to 14-3 on a 24-yard field goal by Mark Moseley.

With seven seconds left in the first half, Raiders linebacker Jack Squirek intercepted Joe Theismann's pass at the Redskins' 5-yard line and ran it in for a touchdown to give Los Angeles a 21-3 halftime lead.

In the third period, running back Marcus Allen, who rushed for a Super Bowl-record 191 yards on 20 carries, increased the Raiders' lead to 35-9 on touchdown runs of five and 74 yards, the latter erasing the Super Bowl record of 58 yards set by Baltimore's Tom Matte in Super Bowl III.

Allen was named the game's most valuable player.

The victory over Washington raised Raiders coach Tom Flores' playoff record to 8-1, including a 27-10 win against Philadelphia in Super Bowl XV.

The 38 points scored by the Raiders were the highest total by a Super Bowl team. The previous high was 35 points by Green Bay in Super Bowl I.

In accepting the Super Bowl trophy Owner Al Davis appropriately memorialized the team, the organization and the overwhelming victory:

"Not only, in my opinion, are you the greatest Raider team of all time, I think you rank with the great teams of all times to have ever played any professional sport."

"Tom Flores isn't just a great coach in our league. With all due respect, he's one of the greatest coaches of all time.

"I want to say one thing to the fans and great players who wore the Silver and Black in the past all over the country. And I want to pay tribute to my partner, Ed McGah, who died earlier this winter. Again, you were magnificent. You dominated. And I love all of you, and you know that. Just win, baby!" 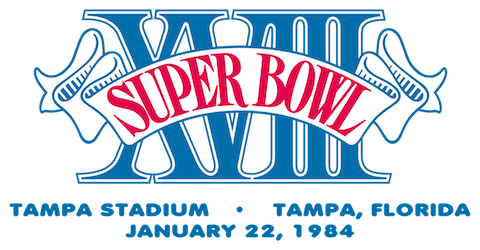 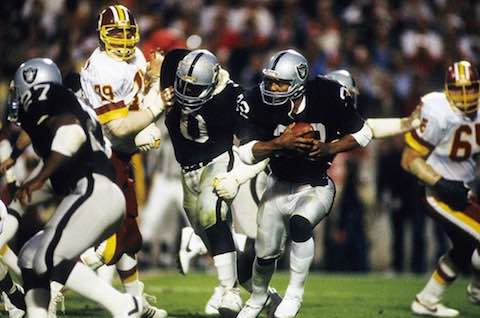 Shattering John Riggins' record for rushing yards established the previous year in Super Bowl XVII, Allen spun and juked his way to 191 yards rushing in Oakland's 38-9 victory over the Redskins.

The agile Allen, who averaged nearly 10.0 yards per rush in this game, scored both of his touchdowns in the third quarter, sealing the victory. He also had two receptions for 18 yards, giving him more than 200 yards from scrimmage.

As Washington's John Riggins had the year before, running back Marcus Allen made a spectacular run the signature play of the game.

While the Raiders set a Super Bowl record for points and victory margin in their 38-9 win over Washington, it was Allen's 74-yard touchdown run on the final play of the third quarter that was the highlight of the team's impressive victory.

After taking a handoff from quarterback Jim Plunkett, Allen headed around left end. Bottled up there, he reversed field, turned the right corner and evaded several Redskins' tacklers on the way to the end zone. The run broke a record of 58 yards set by Tom Matte in Super Bowl III.

Halftime Show: "Salute to Superstars of the Silver Screen" 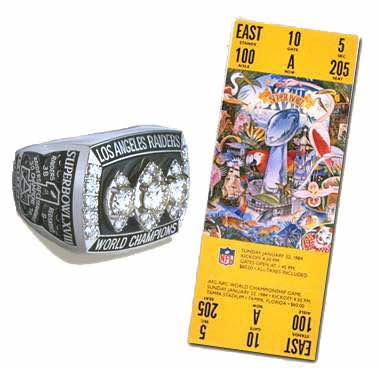