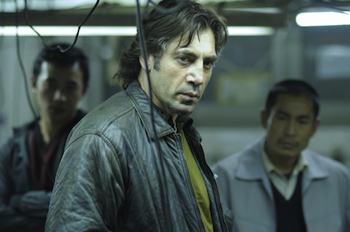 One of the great mysteries of filmgoing relates to a question the medium has posed since its infancy: When is "too much" just right?

If a director's obsessions connect with the ideal material, the effect is beyond logic, beyond rational experience -- and certainly beyond whatever was on the page. Yet one person's glorious excess is another's indulgence.

I found "Shutter Island," which has plenty of admirers, exhausting in its bravura. "Black Swan," similarly pulpy, struck me as even more exciting the second time. You never know.

This week's too-muchness stars Javier Bardem as a desperate yet soulful Barcelona fixer scrambling through his last weeks on Earth.

Bardem brings everything a fine, searching actor can bring to "Biutiful."

It's the picture for which the "No Country For Old Men" Oscar winner snagged the best actor award last year at the . He received an Oscar nomination. For many, this central performance will be more than enough. For others, the film will simply be too much.

With intensity levels starting at 11 and going all the way to 20, director and co-writer Alejandro Gonzales Inarritu's latest melodrama exerts maximum tension, maximum death-shrouded poetry, maximum maximalism. The man who made the bad-luck epic "Babel," "21 Grams," and the more modest and infinitely richer "Amores Perros" is a prodigious craftsman. So, what is it about Inarritu's technique that rivets some while striking others as high-pressure fakery?

I think it's because Inarritu is a sensationalist more than a dramatist. Bardem's character, Uxbal, isn't just dying of cancer. He's dying of cancer while his angelic children (the title comes from the way one of them spells "beautiful") shuttle between patient, saintly Uxbal and the toxic influence of their bipolar prostitute mother (Maricel Alvarez). Uxbal makes his living finding illegal factory work for Chinese immigrants as well as assisting Senegalese newcomers to Barcelona. But he has a sideline working as a spiritual medium, communing with the spirits of the recently deceased for a fee. Against a soundtrack of near-constant siren wails and infant squalls, we watch an increasingly frail Uxbal set his affairs in order before succumbing to his disease as well as to his boisterous city's final embrace.

Bardem does lovely things in the small moments, especially with Hanaa Bouchaib and Guillermo Estrella (as Uxbal's daughter and son, respectively). Yet the character is more beleaguered than complicated. He is a victim of misfortune -- in women, appliances, brothers, you name it. There's an infinite amount of grief and tenderness and humanity to be mined in the role, yet the component parts of suffering fail to add up to a person.

Undeniably Inarritu knows how to jack up the tension, whether the scene involves a young child kicking a table leg or a disorienting, cocaine-fueled nightclub excursion. The filmmaker's sense of parallelism is clangingly obvious, though. One second, the combustible wife is spilling red wine on someone's sheets; the next, we get the visual bookend shot of Uxbal urinating blood. The style isn't realistic; Inarritu has said he meant "Biutiful" to be a "sordid poem about an enlightened man." The filmmaker and his colleagues spin busy, noisy variations on the theme of parents and children. But am I the only one who sensed trouble when the painfully methodical spacing and timing of the opening titles suggested the heaviest, most medicinal tragedy of this or any other year?