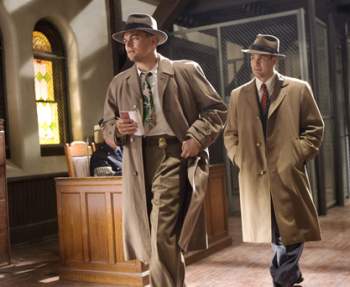 For Martin Scorsese's follow-up to the "crazy" (his word) Oscar-winning gangster picture "The Departed," the director has gone seriously bughouse with the thriller "Shutter Island."

It is less a film than a puny trampoline -- an occasion, though a grim one, for this most fervently movie-mad of American directors to show off his love for the various pulp genres mooshed together by the 2003 Dennis Lehane novel. That book has been adapted, faithfully, for the screen by Laeta Kalogridis.

Its mousetrap-like story, however, depends on a single major twist. Lehane managed to keep the secret a secret a good long while in the book. On screen, directed by a maximalist like Scorsese, that secret has a much harder time of it.

"Shutter Island" is hysterical, in the clinical and cinematic senses, followed by plodding, just when a potboiling contraption cannot afford to be.

By design "Shutter Island" is as hermetic and artificial a construct as the director's own "New York, New York," though the Scorsese film it most resembles in texture and sheer pulp hysteria is his remake of "Cape Fear."

"Shutter Island," set in 1954, starts at roughly that pitch, with U.S. Marshal Teddy Daniels, played as a simmering kettle of violence by Leonardo DiCaprio, arriving at the for the Criminally Insane.

The most murderous patient on the island has escaped, and with his amiable new partner (Mark Ruffalo) in tow, Daniels investigates. All he finds are ghouls, thugs and obstructionists, including the shifty Dr. Cawley (Ben Kingsley), whose clinic may harbor sinister doings in the name of progressive health care.

Daniels, a World War II veteran, has his own problems:

The worst of what he saw at the Dachau concentration camp haunts his dreams, as does the death of his wife (Michelle Williams), an apparent victim of an arsonist's match.

DiCaprio brings a kind of generalized anguish to the role. Scorsese's job here isn't direction: It's redirection and misdirection. That's all there is to this thing: mazelike fun and games, without the fun. Scorsese's (and Lehane's) use of concentration camp horrors is specious at best, offensive at worst. And while Scorsese has never been a stranger to pulp -- what is his masterwork, "Taxi Driver," if not the most disturbing vigilante fever dream ever committed to film? -- I think this time he's slumming or, rather, overcompensating for slumming by overcooking the stew.

Many admire the film's flagrant and unceasing display of atmospheric virtuosity: Scorsese's camera is positively boom-happy, craning this way and that when it isn't swish-panning right and left and right again. Cinematographer Robert Richardson pours his customary (and customarily hammy) hot, white light down on the sweaty protagonist. In Samuel Fuller's "Shock Corridor" (1963), an obvious influence on "Shutter Island," the reporter's lover tells him he's crazy to enter the asylum in the name of a good story. "You're on a hopped-up showoff stage. Get off it!" she says.

Scorsese has earned the right to show off on any stage he pleases. But not even supporting players as deft as Patricia Clarkson, Jackie Earle Haley and Emily Mortimer can make this more than classy, well-acted junk.