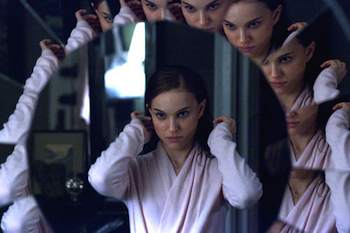 Mainlining Tchaikovsky's "Swan Lake" ballet score like a drug addict, "Black Swan" pushes its protagonist, a Manhattan ballerina devoted (and then some) to her craft, to the brink of insanity and then a couple of subway stops beyond.

Director Darren Aronofsky's film is with her all the way.

Its intensity risks absurdity in nearly every scene, even the ones not featuring Winona Ryder as the alcoholic castoff of the sneering ballet impresario played by Vincent Cassel.

Is "Black Swan" high-minded? I'm happy to say: No.

It is extremely high-grade hokum, which is to say it offers several different and combustible varieties.

Doubtless some audiences will resist it, or wonder how seriously to take the fantasy/reality games the screenplay plays with its central figure. We've seen a lot of what happens here before, in its depiction of artistic torment ("The Red Shoes," "All About Eve," "Showgirls") as well as its visual strategy. Aronofsky's previous film, "The Wrestler," relates to "Black Swan" in its over-the-shoulder hand-held chronicling of its central, embattled warrior. Yet the movie feels all of a piece. Aronofsky soaks the material in the ballet score, and uses Tchaikovsky's themes as well as composer Clint Mansell's variations to heighten each paranoid turn of the narrative. Guiding it all, Natalie Portman's performance as the dying swan is formidable in its nerve-racking expressivity. It is, in fact, a racked nerve, personified.

The original script located the backstage nastiness in a Broadway production fraught with tension between a star and her eager understudy. Rewrites, guided by Aronofsky, relocated the action to a New York City ballet company, where Nina (Portman) aches for the showcase double role of the virginal Swan Queen and her witchy opposite, the Black Swan.

Her chief rival is the brazenly sensual new kid in town, Lily, who struts into rehearsals like the female lead in a musical based on "Mulholland Drive." She's played by Mila Kunis, who keeps the characterization this side of caricature. Nina's slithering frenemy represents everything Nina has yet to explore. Exploration of any kind is tough for our poor heroine: Her cloistered life is confined largely to an apartment littered with stuffed rabbits and "Swan Lake" memorabilia, under the thumb of her former ballerina mother (Barbara Hershey). "It's all this pressure, isn't it?" she queries, desperately, inspecting mysterious scratch marks on Nina's back. The way she asks the question, you can sense the pressure increasing.

Everything good about "Black Swan" announces itself in the prologue. We're in Nina's dream. She is dancing the role destined to take over her life, with the male dancer (in the role of spell-casting Von Rothbart) digitally transforming into a birdlike monster, drawing her into the shadows. It's presented as if a single take. The music dominates, but Aronofsky does his best to match its fire and fearsome pull.

Portman did most of her own dancing in "Black Swan" and while Aronofsky often shoots from the waist or shoulders up, his penchant for lengthy, inquisitive hand-held shots adds an intriguing edge to what we see, whether it's a dream or a rehearsal sequence ruled by the ballet company's imperious rake of a director (Cassel). "Are you freaking out?" Lily asks Nina, after Nina's cast in the leading role. The answer is obvious, even before Nina's obsessive transformation begins in earnest.

Watching the film, which unfolds like an extended hallucination, I resisted some of the digital effects work in the transformation scenes. Elsewhere, one too many shots recall "The Wrestler" in an obvious way. And even by the standards of overheated backstage disaster pictures, some of the dialogue ("This role is destroying you!") settles for the wrong cliches, as opposed to the right ones.

These are small speed bumps in an otherwise propulsive movie. Co-screenwriter Mark Heyman has described it as a "ballet thriller." Aronofsky has only trace elements of wit as a filmmaker; he's more about pounding waves of intensity. But this is his most interesting film to date -- a steroidal melodrama built for speed, motion and cinematic delirium. There's not a more exciting fairy tale for grownups in theaters right now.