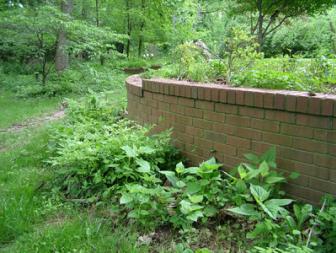 Ask the Builder by Tim Carter

Retaining wall construction is an art that has been around for thousands of years.

You can see these structures in just about any archeological photo of ancient building sites.

In almost all cases, the long-gone builders used stacked stone to build walls that still are in good shape today. All you have to do is understand what they perfected through trial and error.

Since you live in a cold climate, you will have two primary forces of nature trying to make your retaining wall fail. One is gravity, which affects all retaining walls. The other is frost in the soil. Natural erosion is at work against all retaining walls, but it can be very slow acting, so it is often not a major factor.

The soil you're trying to hold back is being pulled toward the center of the Earth, but there's also a down-slope component as well. You can readily demonstrate this with a small pile of dry sand. Build a small hill using dry sand; if you take some away at the bottom or the middle, the entire face of the hill moves down.

The retaining wall you construct has to be strong enough to offset the pushing force of the soil. Do not underestimate this force, as a cubic foot of moist soil can often weigh up to 100 pounds.

Large stones that have lots of surface area touching one another can often do the job. The friction of the stones rubbing against one another works against the pushing force exerted by the soil.

Tall retaining walls are at the greatest risk of failure. As the wall height increases, the force trying to topple the wall increases by a large factor. For example, if you double the height of a wall, the tipping force may increase by a factor of three or four!

My advice to you is to take a little road trip around your area to see if you can discover some old retaining walls made from stacked stone. See what kind of condition they are in, and study those that appear to be very old and in great condition. Measure the size of the stones, the height of the wall, what is above the wall and the construction method. Take lots of photographs -- they'll help you as you start to construct your wall.

Try to keep your retaining wall under 3 feet high. These small walls are fairly easy to construct, and the force of gravity against them is not too great. You may want to construct the wall so it leans back a bit and is not perfectly plumb. This technique offsets the center of gravity of the wall, making it harder to tip over.

Frost damage to retaining walls can be sinister. As soil freezes, it expands. On a normal flat area, this expansion force is normally in the up and down direction. Builders know this as frost heave, and water-works employees know that this pressure cracks water mains underground.

But the frost can push sideways when it is adjacent to a retaining wall. Frost will relieve its expansion pressure using the path of least resistance. Since the ground freezes from the top down, it pushes sideways against the top of the retaining wall, where the leverage force against the wall is greatest. One way to minimize frost damage to retaining walls is to backfill the wall with a well-drained material. Rounded gravel is ideal. The soil itself needs to be well drained so that water can't build up behind the retaining wall.

Be sure the base of the retaining wall is set down in solid soil. Do not just install the first row of stone on the topsoil. The organic material in the soil is not a sound foundation for the wall. Be aware of soil creep. The soil itself is being pulled down slope each year by gravity and frost.