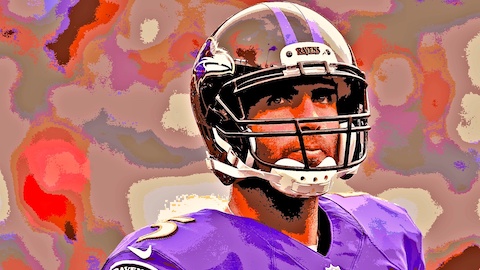 Joe Flacco completed 22 of 33 passes for 287 yards and three touchdowns with no interceptions for a passer rating of 124.2 to earn Super Bowl XLVII MVP honors.

On how winning the Super Bowl feels

On having no interceptions during the entire playoffs

"People mentioned that to me, but I never asked them what the number was or anything. I just kind of avoided the whole thing, for no reason. It's pretty cool. Joe Montana has been my favorite quarterback, so to be put anywhere next to him is pretty cool."

On touchdown to Jacoby Jones

"Unbelievable. It was third-and-10, so it was a perfect time to run that little pump that we ran. I kind of said to Q (Anquan Boldin), ‘You think we should pump it here?' Right as I was saying that, our coordinators were saying, ‘We're going to pump this.' It was just that perfect depth, third-and-10, just enough so that they could come up and bit on it -- think that we're throwing the ball to the sticks. I had to step up and throw the ball on the run and Jacoby (Jones

had great concentration. I didn't want to overthrow him there. He just did a great job coming down with that football and getting in the endzone."

On the 49ers coming back

"You've seen those guys do it. They have the ability to score and score quickly, and that's kind of what they did there. We got it to 28-6 and they were able to put a good drive together. We didn't get anywhere on first, second and third down, we punted it away. We got a good punt return to them. Boom. Next thing you know we turn the ball over. Boom. Games can go like that. That's why you have to take care of the football and get first downs. We have team, that no matter what the situation, we're going to overcome it to the best of our ability. It's kind of fitting that we won like that today."

On the Ravens defensive stand in the final two minutes

"It's unbelievable, especially right after. The 49ers drive all the way down the field and they stop them on four straight downs on the 5-yard line. It's pretty cool. Ray's (Lewis) a great person and everyone knows he's an unbelievable football player, but he's the best teammate. It's unbelievable to send him out like this. The reason for that is, he just wanted us all to feel what it feels like to win this thing. He's felt it, and of course he wanted to feel it again. He really wanted us to feel that and we all made it happen today."

On whether the team was affected with the stadium power loss

"I don't think so. Those things happen and both teams had to deal with it. We came off and they were facing a third-and-14 and we got them stopped and we didn't really do anything with the ball."

"I don't know. It just happens like that. I don't think I'm a person that throws a lot of picks in general. We played 20 games this year and I think, I've thrown 10 of them. It just happens that way. The team came together and got healthy. We hit our stride right at the right point and that's why we're standing where we are today."

"Awesome man, he came up huge. He did a great job getting open on some of the routes that he had and then we relied on him big time at the end there on one of those third downs. They rotated over the top of him, so you really wouldn't throw that ball too much, but he had a little bit of a separation there and he did a great job going to catch that football. That's a beast right there."

On whether he is happy to be named Super Bowl MVP

"Everybody does man. They have to give it to one guy and I'm not going to complain that I got it."

On his contract situation

"It's cool. We just won a Super Bowl. That's the last thing I'm concerned about, but he did let me know that if the day came, I could go beat on his desk and really put it to him. So that's exactly what I'm going to do."

On the Ravens offense

"That's what the game called for. There were some times where they'd go through. There were some times when they did a good job covering people. You could see that on film. You could see that you would get a pass rush at some point. You knew that you were going to have tight coverage on the receivers. Some of the things just worked out that way. We had to make a couple of tight throws and move around early on -- those kept the drives going and allowed us to put those points on the board. That first half ended up being a really big part of the game. This game is crazy. This game always comes down to two-minute drives and that's exactly what it came down to today. We were able to get it done in the first half and these guys came up that short in the game there."

On what he says about the naysayers

"I've never cared. I don't ever want to feel like I'm in a position to defend myself, it's just not right. I don't have to do that. We'll have this thing forever. Everybody on that team will be connected to each other forever and that's something pretty special."

"Our team was great. We were just hanging out, getting ready for the game to get started. The funny thing is, the light was actually really good when the lights went out. I don't know what it would have looked like on TV, but I think the receivers still would've been able to see the ball. The biggest issue was with the headsets. I think our headsets were working and I think theirs weren't. There was something discussed there -- what we might have to do, if they never come back on. It's just one of those things that happen. You just have to deal with it. I think they were able to get some momentum because they got their offense going a little bit."

On if the way they won seemed fitting

"I think it is fitting that we won that way. We are a tough, blue-collar city and that's the way our games kind of come down. We were up 28-6 and I'm sure a lot of people were nervous but were kind of like, ‘This one might be pretty easy.' And the next thing you know, the Niners get right back into it and play great football and we had to grind it out."

On his mindset during the final minutes

"I was sitting on the bench and I was kind of thinking ‘Man, these guys got it going right now.' Just to be honest, I'm thinking, ‘Eh, those guys are probably going to put the ball in the endzone, and we're going to have to go down and kick a field goal to either tie it or win it.' I was assuming they were probably going to go for two again to try to make it a three-point game. That was what I was getting my mindset ready to do­ -- to go down there and put us in position to score a touchdown or kick a field goal."

"It always helps. It is what really makes and forms a team -- a Super Bowl Champion team. We've been put through those situations so when they come up, we don't know if we are going to be successful in them but the bottom line is, the moment doesn't get too big. We are comfortable. We've been there before. We've battled before. We've succeeded before. We are not worried about the outcome. We just go out there and play football, execute and we believe that if we do that, and we do that to our ability, then eventually it is going to work out."